Macron just walked straight into a media trap and gave Putin exactly what he wanted: a snapshot of the West on its knees. 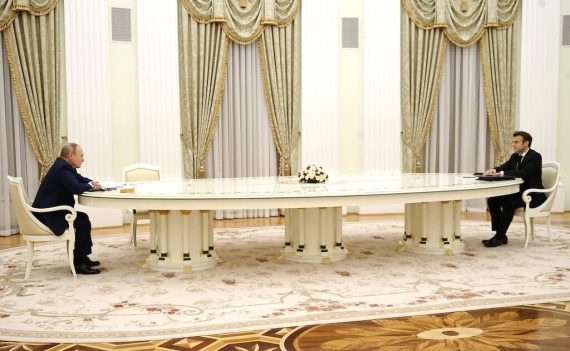 What did France’s President think he was doing by visiting Putin in Moscow? On the anniversary of the EU adopting the Maastricht Treaty – heavily backed by France – a lot has changed in the world. But Macron hasn’t changed his own vision of France and is still living in the 90s where the Republic had more clout on the world’s stage and Russia was just rebuilding itself after the collapse of the Soviet Union.

The long table stunt was pure genius by Putin, who knows a good media opportunity when it walks in the room. The ruse, to make Macron look pathetic, servile and very much a servant at the master’s table paid off as Macron was blindsided by the media arrangements, too obsessed with his moment in the global media spotlight.

Compared to other world leaders who visited Putin – Merkel, Trump and just recently Erdogan – Macron was certainly treated with a certain contempt, which reflects exactly how the  Russian leader regards the EU project and Macron himself. Lightweights.

Macron paid a heavy price consequently to agree to the long table photo shoot which served as an example of how out of touch he is and how desperate he is to promote himself as a world leader, weeks ahead of the Presidential elections in France which will probably reinstall him as the country’s premier.

He believes in a European pillar within NATO and that France should lead such a farcical vanguard, which is really what the visit to Putin was about. He undermined NATO entirely and even went as far as to support Russia’s presence in Eastern Ukraine all in exchange for the meeting itself which he really believed would make him shine at home with the voters and embolden his banal ideas of an EU army, led by France which supposedly would deter Putin.

The Russian leader’s threats are very real and Macron’s visit and the hilarious memes which followed gave Putin even more kudos.

All nonsense and wildly deluded. In reality what we saw by the move was that it merely enshrined Putin even more and affirmed him as a powerful leader of a mighty super power which, unlike the West, does not have a reputation of talking big but then retreating when someone calls its bluff. Putin is not Obama. The Russian leader’s threats are very real and Macron’s visit and the hilarious memes which followed gave Putin even more kudos and placed Russia where it has wanted to be but failed for twenty years – in a superior position where the West is actually listening to its security concerns. Macron just walked straight into a media trap and gave Putin exactly what he wanted: a snapshot of the West on its knees with cavernous, weak, ambitious leaders begging for sympathy.

Macron is part of a political elite which since Maastricht has treated Russia with contempt. In particular, the EU’s role in pushing Kiev to mull NATO membership was foolish and has led to the present crisis. The photo itself of the long table will be logged in the annals of history as the key moment where Russia no longer takes the EU and the West seriously as the tipping point now is in Russia’s favor.

Macron has not only made NATO look weak and ineffective but the Putin visit has also undermined entirely the EU as he often plays the role of the EU’s chief diplomat Josep Borrell who preferred to visit Washington to contribute to the US-led narrative about sanctions.

In reality, the Macron visit showed Putin just how much power he really has and how vulnerable the West is. Unlike the UK, which sent its foreign minister to meet Lavrov, Macron couldn’t resist the media spotlight and to use the chance to show the EU that he is the unofficial leader of the 27 nation bloc. Of course, the nuance here is that he hoped to use the visit to distance France and the EU away from Washington and the NATO club and underline the importance of some sort of new EU army.

But the snapshot of the long table unfortunately underlines how the idea of France leading such an initiative has little support and is very much a grandiose idea which will stay on paper, despite France holding the six month EU presidency and using its position to lobby hard other EU member states.

Putin will be delighted by how the meeting went. Macron really got nothing accept mockery on the internet, while the EU and NATO had to just look on as puerile spectators while he made everyone look like second rate players.

Aside from the memes on the internet which just made Macron look stupid, there are some important messages there which Putin’s media people manipulated. The main message is that Russia has the advantage however the Ukraine debacle turns out. It is the lion, surrounded by mice.

The winner takes it all. And Putin is winning even more now after Macron gave him this latest media coup.

Macron’s embarrassing charade merely supported this. A French president who has delusional views about his own status in the world organizing himself a personal visit to see the Russian president doesn’t make France look like the super power that it would like to project of itself, more like a corrupt, minor EU member state which allows its president to manipulate its own media, led by a man who clearly doesn’t have any respect for the fourth estate.

France today is struggling to come to terms with its new demise and Macron’s visit just underlined this as he walked away a loser. The winner takes it all. And Putin is winning even more now after Macron gave him this latest media coup.

Another message from Putin is that he is neither scared nor bothered by the threat of sanctions from the West, which is really what the whole row is about. Sanctions alone will be difficult on Putin and in particular his close circle of tycoons who have huge investments in London. But as Biden has proved, secondary sanctions imposed on a handful of countries which buy oil from Iran, are very hard these days to implement and Putin has made it clear that, if necessary, he will trade sanctions for an invasion of some sort, if the West doesn’t engineer a way of Ukraine talking down NATO membership.

Of course, if Putin sent his own troops into those regions, Macron may well be delighted as this would give even more gravitas to his idea of an EU army. The problem of course is that the French leader doesn’t want to send French troops to a war zone with Russia, as he has proved by speeding up his own withdrawal of troops in Mali, once the presence of Russian mercenaries just recently emerged. But it will be that iconic picture of the long table which will haunt Macron as the Russian media machine will be the victor. As Churchill once said, history is written by winners. And that snapshop of the long table makes it quite clear who the winners and losers are.