If Turkey and the Syrian opposition fail to stand firm, the political transition process towards peace in Syria might fail. 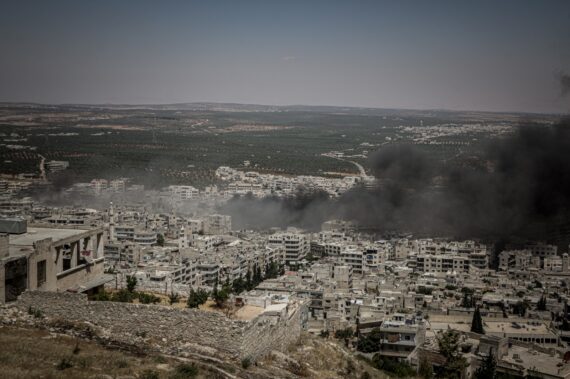 Smoke rises after Assad Regime warplanes carried out airstrikes on the town of Arihah in Idlib province, Syria on July 28, 2019. Photo: AA

For over two months, shelling, air strikes and clashes at the front in Idlib have become a way of life. In this period, over 300 civilians have been killed, thousands more have been injured and over 330,000 fled their homes. On the battle front, the Assad regime and the Syrian opposition mourn heavy causalities, and no side has come out winning. Even if the Assad regime, supported by heavy Russian air support, has managed to reverse all gains by the counter-offensives of the Syrian opposition, the main question remains: Where is the escalation in Idlib heading and what is its purpose?

When de-escalation in Idlib ended, Russia’s purpose may have been to force Turkey to implement the Sochi memorandum, or to open the way for the regime axis; but as Turkey stood its ground firm and responded, both sides entered a stalemate. Since then, the spiral of violence continues. Since the initial progress by the regime axis at the beginning of the ground assault, the Syrian opposition managed to capture other areas in counter-offensives, but over the weekend the regime managed to gain control over lost terrain. This development opens the question: Will the regime push further, or after restoring lost terrain will de-escalation somehow achieved?

I argued before that recent developments in northwest Syria could in fact give Turkey and Russia the opportunity to re-enforce the Sochi arrangement. However since then, there isn’t any real change on the ground or a diplomatic sign towards a new rapprochement between Turkey and Russia in regards to Idlib. Those arguing that the escalation in Idlib was designed to push Turkey to fulfill its purchase of the S-400 were proven wrong by the continued bombardment despite Turkey’s purchase of the air-defense systems. The purpose of the current escalation hasn’t yet become clear.

If the regime axis wants to capture all of Idlib, or at least all the region to the M4 and M5 highways, the current strategy won’t achieve this goal. The Assad regime would need to open several different fronts; and the Russians would need to expand their air campaign towards the Turkish-Syrian border, the Russians would need to call Iran in as the Iranian militias could turn the table in favor of a military ‘solution’ in Idlib. Regardless of the implications of such steps, until today they remain untaken.

The escalation’s current nature is more suitable as a strategy to force the other side to make concessions at the negotiation table rather than to enforce a military solution. In this regard, the purpose of the current escalation in Idlib may have changed during the course of the spiral of violence due to Turkey’s response, but the Russians may attempt to channel the escalation into a deal in the next Astana meeting on August 1 on 2. It’s known that Turkey and the Syrian opposition insist on a genuine political transition process, and that the details of the formation of a constitutional committee and its working procedure have to be set yet. Therefore, Russia may try to use the escalation in Idlib as a bargaining chip to enforce its terms on Turkey and the Syrian opposition, which will favor Assad and aim to prevent real power-sharing.

If this is the case, and Turkey once again doesn’t knock over under Russian pressure of escalation, what will happen to the Astana process and what will happen to the escalation in Idlib? The answer to this question underlines the importance of Idlib; and the importance of Turkey’s role. If Turkey and the Syrian opposition fail to stand firm, the political transition process towards peace in Syria might fail. The international community has to understand that only their stance with the Syrian opposition can really pressure the regime axis to implement and accept changes towards a brighter future for Syria. Neither the threat of sanctions and the promise of reconstruction funds, nor reliance on a local actor following a separate agenda outside the regime-opposition dispute will result in the acceptance of demands by the regime axis.