Turkish defense industry might have to bear the burden of losses from being removed from the F-35 program and supply chain, but it should continue prioritizing the intellectual investment in the defence industry and learn how to become a “competitive supplier” rather than a “contributing customer”. 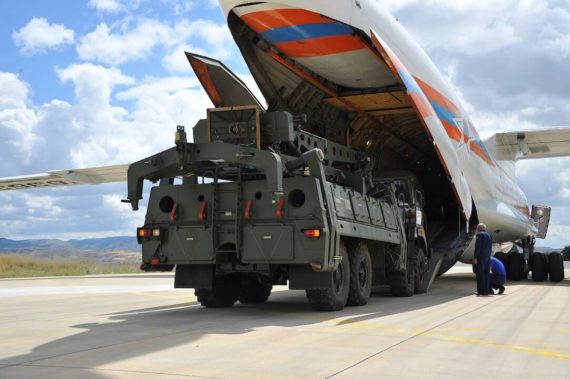 Today, in the eyes of U.S. and most European countries, Putin’s Russia is more interventionist, aggressive and expansionist which has allegedly been the case in Georgia, Crimea, Ukraine, Syria and once again Afghanistan. While the Russian presence in the Eastern Mediterranean and especially across Southeast Europe provoked the political and military concerns of western allies, Ankara’s decision to purchase Russian military technology triggered even greater pessimism and a new round of fears at NATO. However, despite Turkey being key to the defense of NATO’s southeastern flank, the same kind of fear and concerns have long existed in Ankara subjected to many negative experiences from its NATO allies.

Nevertheless, even though Turkey has been a NATO member since 1952 and has contributed to the NATO alliance in many respects, such as storing American nuclear weapons in its İncirlik Base for many years, as well as hosting NATO’s Missile Defense Radar at a military base in Kürecik, it is obvious that Ankara will be facing numerous challenges in the next few years as a result of the decision to procure S-400s.

On the other hand, Ankara was already aware of the likely scenarios and possible negative outcomes of its choice to purchase a strategic weapon system from Russia, even if it is for “defense purposes”. In this respect, the cost of Turkey’s preference to buy the “best all-around” missile defense system will include both “direct” and “indirect” sanctions. The probable costs that Ankara will bear from the acquisition of Russian advanced weapon capabilities can be classified under five headings:

1. Shift in Washington’s attitude towards Ankara

Whether implicitly or explicitly, the first type of sanction will presumably be the significant changes in Washington’s political, economic, military and diplomatic attitudes towards Turkey’s foreign, security and defense interests. The American stance might be more challenging for Ankara on a wide range of topics such as: the PKK/PYD/YPG, the Syrian Civil War, the Eastern Mediterranean, the Aegean and Cyprus issue, Palestine, refugees, and the currency crisis among other topics. From Washington’s perspective, the purpose would be to show that anyone – even a NATO ally – who partners or cooperates with “America’s adversary” (namely a “strategic rival”) will have to pay the price. Therefore, the price expected to be paid by Turkey will not only be in military measures, rather it will be across a broad landscape of issues that may lead to serious consequences. Such as diminishing Ankara’s political and legal position in growing regional disputes. For example, the rising tension because of natural gas discoveries in the region.

The second cost will appear after imposing sanctions on Turkey under Countering America’s Adversaries Through Sanctions Act (CAATSA) (Public Law 115-44). While Section 235 of CAATSA lists 12 sanctions, the President can impose five or more of the sanctions described in the section. Additionally, the president can delay the imposition of the sanctions up to 180 days. Accordingly, if Trump would like to take a softer approach on Turkey then he can select five sanctions from the list which are the least costly and least harmful ones. Trump can also ask for flexibility in order to suspend the imposition of sanctions for a couple of months.

3. Cancellation of the delivery of F-35 Fighters

The third sanction is canceling the delivery of 100 F-35 fighters to Turkey. Some allege that Turkey’s military strength would be severely weakened in the absence of a fifth-generation multirole fighter that provides a greater performance on today’s battlefields with its high levels of survivability, awareness, readiness and effectiveness. In other words, it is assumed that a Turkish Air Force without F-35s in its inventory will not be able to achieve full operational capability. Besides, there are also other probable negative scenarios, F-16s which are currently used by Turkish Air Forces might fail to show operational performance in the near future if the U.S. does not provide the equipment required to perform specified maintenance tasks.

The fourth sanction might be a de facto implementation of sanctions by Washington through defense export and procurement processes. Even if Trump does not select to impose the “export sanction” (Section 235/2) or the “procurement sanction” (235/6) in CAATSA, Washington might implicitly apply these two types of sanctions in order to punish Ankara by its defense companies. In this regard, the U.S. would continue to apply two basic punishment methods: (i) not to procure or enter into any contract for the procurement of any goods or services from the sanctioned person”, (ii) not to issue any specific license and not to grant any other specific permission or authority to export any goods or technology to the sanctioned person.

The fifth and last sanction is removing Turkey from the F-35 fighter program and so altering the program’s supply chain operations. The Pentagon has already called for the discontinuation of Turkey’s participation in the F-35 program on July 17, 2019. As a result, Lockheed Martin stopped exporting goods from the Turkish supply chain. It is a fact that Turkey’s removal from the F-35 project will not only bring military disadvantages but will also lead to economic, technical and intellectual losses.

First and foremost, it is not a correct approach to make a net analysis on profits and losses by comparing the money paid by Ankara for purchasing 100 F-35’s with the amount of money expected to be earned by Turkish defense companies contributing to the construction of F-35s. The first reason is the total cost of acquiring F-35s does not finish when Ankara pays for the selling price. On the contrary, the cost of the F-35 program gradually increases over time as Turkey keeps investing in them so that they remain in service for decades, starting from the “Concept Demonstration” till the end of “Disposal” phase. Thus, the total Life Cycle Cost (LLC, also called as Total Ownership Cost) of F-35s would be very high even when you think Turkey pays through the expected service life of more than 100 platforms. Clearly, whether a program partner or a customer, the sustainment costs of F-35s will be very expensive for any buyer.

Turkey’s preference of buying the “best all-around” missile defense system will include both “direct” and “indirect” sanctions.

On the other side of the coin, Turkish defense companies would benefit for several decades as contributors to the F-35 supply chain. However, the estimated “10 billion for both the direct and indirect costs of sanctions on the Turkish defense industry” is neither an accurate calculation nor a rational way to declare a prediction. Initially, how the shifts in the F-35 supply chain will affect small and medium-sized national companies is a more important problem than the impact on the main contractors involved in the project who are the big companies in which the Turkish Armed Forces Foundation is a shareholder. In this sense, it is necessary to take into account the domestic debt in the defense industry and its losses. Especially for these small and medium-sized firms which may not survive and will be forced to undergo a winding-up process.   In contrast, TAI, HAVELSAN, KALE Aerospace, ROKETSAN, TUBİTAK SAGE, TUSAŞ Engine, ALP Aviation, AYESAŞ and FOKKER ELMO which have been producing different parts of the F-35s are the big companies of Turkish defense industry and can survive either way.

Secondly, if U.S. or any other NATO country like the United Kingdom, Germany or Italy cancel future exports to Turkey such as for T129 attack helicopters, then Turkey might prefer another supplier outside the NATO market. In addition to this, the technical and intellectual costs would be higher than sanctions imposed through licenses and exports, since “know-how” and “expertise” remains as the most critical investment for the future of the Turkish defense industry. However, it is also an option for Turkey to join as a partner to acquisition programs as well as cooperate on joint production facilities with various countries from different continents. Keeping in mind that the global defense market is becoming aggressively competitive for the top arms exporter countries. That is to say, there is a wide spectrum of suppliers searching to cooperate with the Turkish defense industry.

In brief, Turkey’s choice to acquire S-400s was not an instant and reactionary decision. As a matter of fact, Ankara’s decisiveness has long been recognized by its western allies. For this reason, the Ankara government had already foreseen the possible reactions given by its western allies. Thus, the possible sanctions were already voiced in official circles in Washington. Since the possible U.S. sanctions are not surprising, the likely scenarios such as the loss assessments and probable negative outcomes, have already been discussed within the Turkish defence bureaucracy. Now all eyes are on Washington which is still weighing the implementation of penalties and security measures against Turkey, and on Ankara’s response with a roadmap based on possible options varying from reconciliation through diplomacy to the use of counter-measures. Preparing for the worst, the Turkish defense industry might have to bear the burden of losses from being removed from the F-35 program and supply chain, but it should continue prioritizing the intellectual investment in the defence industry and learn how to become a “competitive supplier” rather than a “contributing customer”.