The US sanctions are the main reason why the Cuban economy has been struggling. COVID19 made the situation worse. 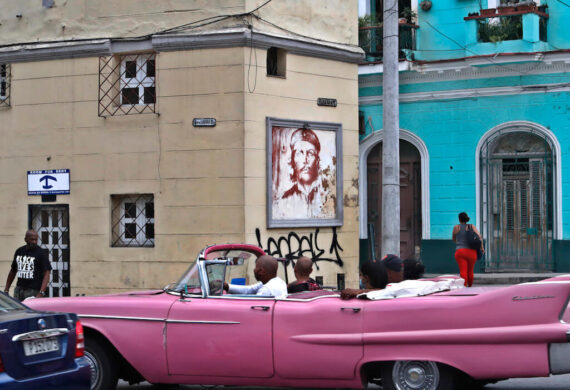 A classic car passes in front of an image of Che, in Havana, Cuba, on January 11, 2021. Photo by Yander Zamora, Anadolu Images

Cuba’s gradual easing of restrictions following the coronavirus pandemic has been discussed in terms of its economy. An article published recently highlights the pandemic predicament as the main reason in Cuba’s dwindling tourism statistics.

COVID19, however, was not the only reason for Cuba’s contracting economy. On the 59th anniversary since Kennedy signed the executive order for the blockade against the island, Cuban President Miguel Diaz Canel noted that the island incurred losses of over $144 million since 1962. The largest deficit, however, was reached between 2019 and 2020, when the reversal of the Obama Administration’s policies towards Cuba, which included normalization of relations, caused a loss of over $5 billion dollars.

Blaming the Cuban Revolution suffices for the capitalist narrative. Even when reforms are announced, these are juxtaposed against the central economic model which was implemented in 1959. However, an early assessment in 1961 shows that Cuba was on track with fulfilling its promises to the population, laid down in Fidel Castro’s defense speech, ‘History Will Absolve Me,’ in 1953. On trial for the Moncada Barracks Attack, Fidel Castro not only defended his position but also utilized the moment to communicate the revolution’s political program. Land, industrialization, housing, unemployment, education and health were the six main points highlighted by Fidel Castro.

By 1961, an early assessment indicated that the revolution was fulfilling its promises. The emphasis upon education, health and agrarian reform indicated the will to rebuild Cuba in the face of shortages faced due to its elite workforce abandoning the island for the US. In February 1962, US President J.F. Kennedy authorized a complete blockade over Cuba, even as the US busied itself with the creation of USAID – a governmental agency ostensibly promoting economic development, and used as a veneer for infiltration in Cuba.

VIDEO: Cubans hit with US sanctions: Families send food instead of money

The blockade was instrumental in Cuba’s shift towards the Soviet Union and it was during this time that Fidel publicly declared allegiance to Marxism-Leninism.

This is not to say that Cuba was not heavily dependent upon the Soviet Union, particularly in the aftermath of the Cuban Missile Crisis. Such dependence became clear upon the dissolution of the Soviet Union in 1989, when Cuba entered into the ‘Special Period’ and found itself isolated. In Fidel’s words, ‘From day one to the next, we found ourselves without fuel, without raw materials, without food, without soap, without everything.’

In 1992, the Cuban Democracy Act  reinforced the blockade until the government complied with US requests for free market economics and constitutional change, among other requirements. The Helms Burton Act of 1996 further intensified the blockade, expanding the embargo to include foreign companies dealing with Cuba, while explicitly outlining the US plans for a transition government replacing Fidel Castro.

Meanwhile, Cuba continued expanding its education and healthcare programs, distinguishing  itself in the region, as even the World Bank acknowledged in 2014. However, the blockade has long been recognized as one of the main impediments of Cuba’s economic growth.

In February, the Cuban government announced it would be lifting restrictions on self-employment to stimulate the local economy in terms of imports and exports. US mainstream media, however, is lamenting the reforms as not capitalist enough, albeit timely enough to meet the possible shift in diplomatic relations between Cuba and the US under the Biden Administration.

Cuba’s self-reliance and its regional cooperation with Latin American countries were both strategies devised to challenge the Western economic development concepts.

What the US expects from Cuba, however, differs from what the Cuban system aims to achieve. The reforms were not aimed at establishing a capitalist model in Cuba, but rather to enable the island to cope under the deprivation caused by the US blockade. While the US equates a possible Cuban departure from socialism with economic prosperity, the Cuban model remembers the US exploitation of the island, and the absence of any sustainable development in Cuba. In 2019, Cuba was ranked top in the global ranking for sustainable development – an achievement with historical roots dating back to 1953.

Recognizing the role the Cuban Revolution played in Cuba’s success also requires thorough consideration of the US role in hindering Cuba’s economic development. Cuba’s self-reliance, and its regional cooperation with Latin American countries, were both strategies devised to challenge the Western economic development concepts that do not go beyond the capitalist model and the desire that Cuba submits to the same. Furthermore, the US placed many hurdles for trade with Cuba to proceed seamlessly, with the threat of sanctions looming overhead as a means of coercion for the island to abandon its revolutionary principles and practice.

The coronavirus pandemic, however, provided an opportunity for the international community to view Cuba through its own lens. In the early days, as footage of health services worldwide collapsed with the influx of hospitalizations and rising death tolls, Cuba burst onto the international scene with its medical contingent – the Henry Reeves Brigade. A testament of Fidel’s words during the Haiti earthquake in 2010  – “We send doctors, not soldiers!” – when Cuba sent its medical teams as the US increased its militarization of humanitarian aid, the Henry Reeves Brigade offered its services to countries worldwide. Italy was one of the first countries welcoming the medical brigade, as images on TV illustrated the inability of the healthcare system to cope with the sudden onslaught.

While Cuba offered its help abroad, Cubans at home benefited from a healthcare system that tended to their needs. Unlike the US, for example, which mismanaged the pandemic from the start, Cuba is now the first Latin American country close to developing its own vaccine.

As the Business Insider plainly stated in its headline, Cuba ‘has a history of fighting disease without help from the West.’ Which begets the question – what would Cuba achieve internationally if the US blockade was lifted, and the island was able to trade freely in the international arena?

With a vaccine on the horizon, a plan to inoculate all Cubans by the end of 2021, the possibility of vaccinating tourists visiting Cuba while also providing additional doses, it cannot be denied that the advances in healthcare are one of the strongest factors in Cuba’s economy, or would be without the embargo.

Unlike the vaccines approved by the Western world, the Cuban Soberana 02 is less expensive and needs no extreme conditions for transportation, making it a preferred option for low-income countries and offering the possibility of equality – a concept that has been missing in Europe, for example, as countries squabbled over doses and delivery.

That attention is shifting towards lifting the US blockade on Cuba is a necessary and opportune moment. The medical internationalism employed by Cuba – part of the revolutionary reform that became a significant component of the island’s economy – is one aspect that should encourage an alternative perception of Cuba and its revolution. If the blockade is lifted, Cuba could play a significant role that reflects what Fidel envisaged before the revolutionary triumph. Without the expectations that the island adopts a capitalist approach, Cuba would be in a position to alter the perception of profit, in favor of an approach that is dignified and truly inclusive.