Securing a Future for Syrian Women in Turkey

Turkey is home to the highest refugee population in the world, having adopted an open door policy for people who come from Syria to Turkey. The number of registered Syrians in Turkey has reached 2,783,617. Of these, 1,301,026 are Syrian women. 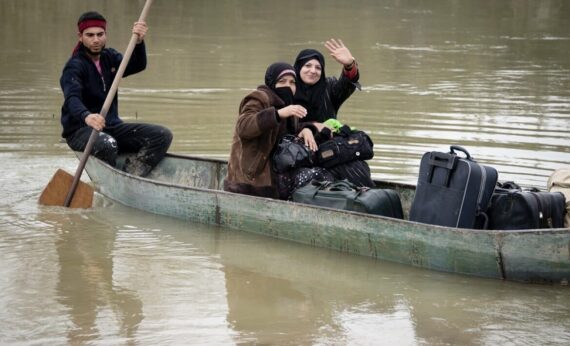 Turkey is home to the highest refugee population in the world, having adopted an open door policy for people who come from Syria to Turkey. The number of registered Syrians in Turkey has reached 2,783,617 according to data from the Ministry of Interior Directorate General of Migration Management for December 2016. Of these, 1,301,026 are Syrian women.

WorldBy Silan Cecen
While all Syrians – women, men, children, and elders – have been affected by violence and conflict in Syria and their life has been upended, the group mostly affected by affairs are women and children.Even when there is no war or conflict, women and children are regarded as a disadvantaged group. Taking on the burden of chaos and conflict has deepened their usually disadvantaged situation. Analyzing news about Syrian refugees in written and visual media illustrates the fact very well. Sometimes, the coverage shows a Syrian girl sleeping in front of traffic lights after begging; sometimes it shows that Syrian women are being taken as second wives, and sometimes it reflects success stories. Considering that the issue of Syrian refugees has been used as a political tool, this depiction, which symbolizes the extremes of either “happiness” or “poverty,” does not reveal much about Syrian women’s future.

It is important that observations and experiences give an idea about problems. Commentary, which has been used as a political slogan, will contribute only to ideological propaganda. In order to improve the economic and social conditions of Syrians at the macro level, and at the micro level the present and future of Syrian women, it is necessary to identify the problems facing them, and develop a road map by giving up ideological obsessions and subjective reasoning.

Why Should Syrian Women Be Selected As Target Group for Support?

In general, women have more gender-oriented problems than men when participating in economic, political and social life. This is valid for women living not only in developing but also developed countries, where they confront difficulties and challenges to varying degrees. Despite their disadvantages, women take on a role being a leader for a family and society to change and advance. Because of their powerful effect on the family, women have come into prominence as an actor that makes easier the process of adaptation. For this reason, Syrian women are responsible for the Syrian population’s efforts to participate in the economic and social life in Turkey.

When analyzed in terms of their age groups, the female Syrian population offers ideas for new policies.

Syrian women are almost half of the Syrian refugee population in Turkey, and the 5-18 and 19-34 age groups include the most Syrian women. These groups have 829,255 persons, which is almost 64 percent of total Syrian female population in Turkey. The youngest age group, those less than five years old, includes a large number of women, 189,814. This indicates that the fertility of Syrian women has not been affected by problems such as living in a foreign country, not having a stable life, and an uncertain future. At the same time, this indicates Turkey has to take into consideration these groups to determine programs such as education and health support. But a further policy needs direct communication with Syrian mothers. For this reason, education, care and health policies including the under-five age group, girls and boys, can be used as a tool to solve problems of Syrian women and satisfy their needs.

On the other hand, the ratio of Syrian women in the 19-34 age group is almost 30 percent. If this group actively participates in economic and social life, it might be easier for them to adapt to life in Turkey, and any negative impacts of the Syrian refugee presence on society would diminish.

In making policies to address the issues facing them, certain aspects, like the traditions, culture, and habits of Syrian women must be taken into consideration.

A basic mistake seen in developing policies is the assumption that Syrian women are the same as women in Turkish society, since both groups are predominantly Muslim, and they come from neighboring countries. But Syrian society has a somewhat different culture, life style and customs, and the war in Syria has created new social practices that have problematic aspects for those trying to settle in Turkey.

One example is the presence of polygamy in Syria, where the law allows for a man to take a second wife after getting permission from the first.  In Turkey, the law prohibits a second wife altogether.

Polygamy has increased inside Syria since the outbreak of the war, because more and more widowed women find themselves looking for ways to provide for their children’s needs. Data on the practice is not clear, but some research examining the ratio of polygamy has shown that it has increased since the start of the conflict.

According to figures, polygamous relationships accounted for 30 percent of marriages registered in Damascus in 2015, up from just five percent in 2010. The popularity of the practice has apparently been driven by a situation in many parts of Syria where women find themselves far outnumbering men, as they have either gone to join rebel groups, or been killed or captured in combat. A large proportion of young men have fled the country fearing the regimes expanding policy of conscription as well.

Syrian women are more likely to face economic and social pressure to enter a polygamous marriage in order to secure their future. There are also practical problems for a Syrian woman in a polygamous relationship. Under Turkish law, for instance, such a marriage is not recognized. A whole range of things are therefore unavailable, everything from obtaining a proper residence permit to making sure an ex-husband provides financial support after a divorce.

While Syrian women need to be empowered in terms of social and economic aspects, a “modernist” approach that looks for a complete break from religious and cultural habits needs to be avoided.

Good implementation taking into account unexpected difficulties can result in positive outcomes in the long term. A more realistic and rational implementation is needed. Considering the reality related to cultural features of Syrian women, such as polygamy, childbearing (high fertility rate), early marriage, and perception of women and family, they should be encouraged to participate in education and training programs, and macro policies should be enacted to help them become working professionals.

Younger girls, aged between 4 and 17, should have an education, and an effective communication method should be generated between their mothers and educational actors such as teachers and school principals. Otherwise, an uncertain and gloomy future might be in store for Syrian women and girls. Moreover, the social dynamic of Turkish society will be affected as well. The economic and social participation of the Syrian population can be ensured through the leadership of Syrian women.