Warning: mysqli_query(): (HY000/1021): Disk full (/tmp/#sql-temptable-3ad-edd-18ad.MAI); waiting for someone to free some space... (errno: 28 "No space left on device") in /var/www/vhosts/politicstoday.org/public_html/wp-includes/wp-db.php on line 2162
 Silencing Dissent in the Middle East: Forced Disappearances - Politics Today
Skip to content

The practice of “enforced disappearance,” which has been employed by countries such as Egypt and Saudi Arabia, against the dissidents of the regime, is against human rights and is considered a crime against humanity under international law. 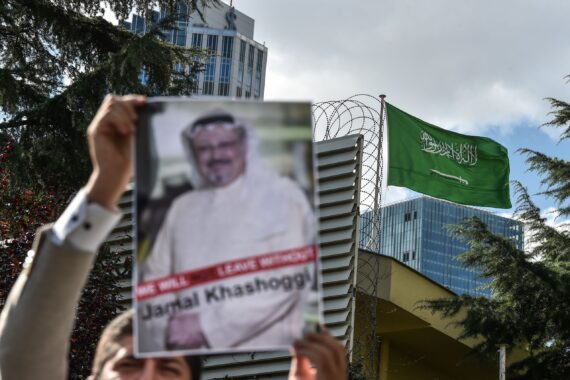 A protestor holds a picture of missing journalist Jamal Khashoggi during a demonstration in front of the Saudi Arabian consulate, on October 5, 2018 in Istanbul. Getty Images

Repressive regimes in the Middle East often practice various methods to silence the dissent. One of these increasingly utilized methods is “enforced disappearance.” Enforced disappearance is defined in the International Convention for the Protection of All Persons from Enforced Disappearance as “the arrest, detention, abduction or any other form of deprivation of liberty by agents of the State or by persons or groups of persons acting with the authorization, support or acquiescence of the State.” Article 5 of the Treaty labels enforced disappearance as a “crime against humanity” and urges all signatory states to prevent such actions.

A recent example of such a case took place at the Saudi consulate in Istanbul. Jamal Khashoggi, a prominent Saudi journalist and influential figure in Saudi Arabia, disappeared after he entered the Consulate General of Saudi Arabia. It’s widely argued that the Saudi administration might have played a role in the disappearance of the journalist, who is also a columnist for the Washington Post. In an attempt to divert against the backlash, in an interview he gave, Crown Prince Mohammad bin Salman stated, “the Saudi government have no information on the whereabouts of Jamal Khashoggi.”

Those who followed the incident however, claim that the Saudi regime is responsible for Khashoggi’s disappearance. Some even fear that Khashoggi may have been a victim of an unsolved murder. This case has created international outrage as the journalist has close relations with influential figures in world politics. There have been a number of numerous calls from state representatives, media organizations, and human rights campaigners for the immediate release of Khashoggi, and Turkey has begun an official state investigation.

If the Saudi government is responsible for the disappearance of Jamal Khashoggi, this event can be accepted as a case of enforced disappearance. However, even if it is so, a sanction would not be possible for Saudi Arabia in the context of international conventions, as the Kingdom is not a signatory of the Convention for the Protection of All Persons, just like other countries in the region, including Egypt.

Egypt has kept the lead in the Middle East with the most cases of “enforced disappearances” during the past couple of years. After the military coup in 2013, the Sisi regime targeted activists and dissent that opposed the military regime. In many cases, the regime directly arrested opposition figures on claims of supporting terrorist organizations, spreading false news, and supposedly threatening public order. In other cases, a number of activists disappeared without the knowledge of anyone, including their families and lawyers. In these cases, the missing person is usually found in prison – usually months after their “enforced disappearance.”

One of the most horrendous events in this regard took place in 2016. Italian citizen and PhD candidate at Cambridge University, Giulio Regeni, disappeared in Cairo on January 25, 2016. 9 days later, he was found dead with signs of heavy torture. Although the Egyptian security authorities took no responsibility for his death, human rights campaigners and the family of Regeni claimed that the regime was responsible for his death.

These enforced disappearance cases in Egypt showed a rapid increase especially after the military coup in 2013. According to a report by the Egyptian Commission for Rights and Freedoms, at least 378 people disappeared in-between August 2016 and August 2017. The total number of disappeared persons since 2013 would go well beyond 1000. In many cases, the government initially denies having any information on the whereabouts of the person that has disappeared. However, most of the people reported missing are usually found in prison weeks or even months later. Some of them, though, have never been found.

The practice of “enforced disappearance,” which has been employed by countries such as Egypt and Saudi Arabia, against the dissidents of the regime, is against human rights and is considered a crime against humanity under international law. Therefore, both human rights campaigners and the international community have to put pressure on governments that practice “enforced disappearance” as a method of silencing the dissent.

Also Read
The US-Iran Scramble for post-Abadi Iraq: How Will Turkey be Affected?