The prospect of a United Ireland will influence and promote Sinn Féin’s present stance in favor of an independent Palestinian state. 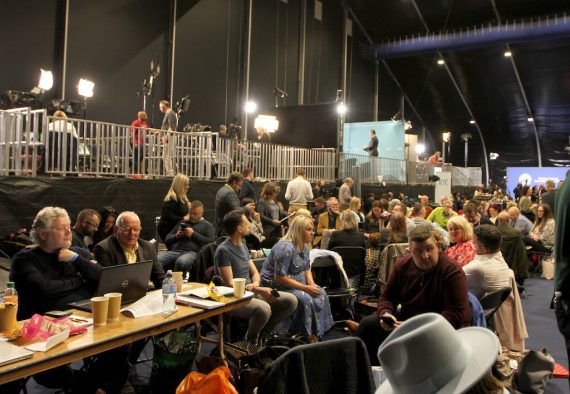 Polling clerks count votes after voting ended for the 2022 Assembly Election in Belfast, North Ireland on May 06, 2022. Photo by Conor MccCaughley. Anadolu Images.

Sinn Féin, the Irish nationalist party, has won a historic vote in Northern Ireland, making it the largest party in the Northern Ireland Assembly for the first time. On Saturday, May 7, with nearly all of the votes from Thursday’s election counted, Sinn Féin took 27 of the Assembly’s 90 seats.

The President of Sinn Féin, Mary Lou Mcdonald, has increased her efforts for an Irish reunification referendum. She stated, in an interview, “I believe the referendum would be possible within a five year timeframe, much more importantly, I believe the preparation needs to start now.”

Read: “False peace only postpones conflict”: An Interview with Danny Morrison of the Bobby Sands Trust

Similar sentiments were expressed by Michelle O’Neill, Sinn Féin’s deputy president and first minister-elect, who stated, “today ushers in a new era which I believe presents us all with an opportunity to reimagine relationships in this society on the basis of fairness, on the basis of equality and on the basis of social justice.”

Ireland made international news in May 2021 when it became the first EU country to call Israel’s annexation of Palestinian territory unlawful. The motion’s unanimity generated widespread attention. Ireland joined the list of other countries and human rights organizations in calling out the annexation of Palestinian lands. John Brady, Sinn Féin’s spokesman for international affairs, reaffirmed: “we are baldly stating that Israel is acting illegally under international law.”

The Irish lower house of parliament passed the Occupied Territories Bill 2018, which prohibits trade between unlawful settlements and was introduced by independent TD Frances Black. Despite the fact that the measure has yet to be passed into law, its passage is viewed as a significant win for the Boycott, Divestment, and Sanctions (BDS) movement, which seeks to put economic pressure on Israel in order to end its unlawful occupation of Palestine.

While it is evident that the Bill is compliant with EU legislation, it’s vital for Ireland to adopt the Bill in order to satisfy its international legal commitments. Michael Lynk, the former United Nations Special Rapporteur for the Occupied Palestinian Territory, recently told the Irish Times that “among the measures which states must adopt [to meet their international law obligations] is a ban on trade with Israel’s illegal settlements.”

Seán Crowe, Sinn Féin MP and Foreign Affairs spokesman, declared in 2020 that recognition of the State of Palestine must be a priority for the next administration, whatever of its makeup. He added, ”I am calling on the Irish Government to not only formally recognize the State of Palestine, but ensure by every diplomatic means available to press Israel to end its ongoing forced displacement of Palestinians, to abandon its proposed annexation of the West Bank, end its apartheid laws, to abide by international law and recognize the right of Palestinian refugees to return to their homes and their homeland.”

The prospect of a United Ireland will influence and promote Sinn Féin’s present stance in favor of an independent Palestinian state, gaining additional support across Northern Ireland. This will open the way for European states with economic ties to Ireland to take a clear stand on Palestinian sovereignty.