Sisi’s frequent meetings with Trump and Netanyahu reveal that Egypt is under the full control of the U.S. and Israel, particularly with regards to their policies in the Middle East. 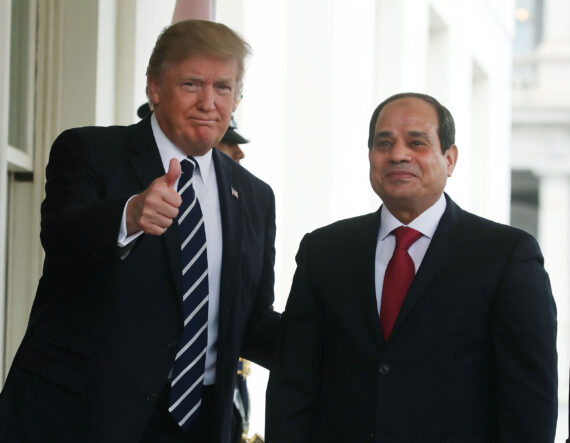 Egypt’s President Abdel Fattah Al-Sisi made his fifth appearance at the United Nations General Assembly. He has become the first Egyptian president to participate in the UN General Assembly for five consecutive years. In his speech he made during the General Assembly, Sisi focused on the changes in the Arab world and the human rights issues.

Despite Egypt’s well-known record on human rights infringements, Sisi absurdly stated, “Egypt has a solid constitutional foundation for the protection of human rights.” The fact that an individual who toppled a democratically elected President through a military coup and who has an extensive record on human rights abuses was lecturing about human rights at the UNGA was shocking for many. This was an additional insult for the many Egyptians who have and who still currently suffer from the Sisi state’s repression.

Despite his autocratic rule, Sisi has been regarded as a legitimate political leader. Western actors, who have supported Sisi without bringing any criticism to his human rights violations, can be blamed for the suffering of the Egyptian people at the hands of a brutal regime. Countries such as the U.K, U.S., Germany, France, and Italy have behaved as if a military coup never took place in Egypt, as if thousands of civilians were not taken into prison for years and as if opposition activists have not suddenly disappeared. This attitude has been a major factor that has encouraged Sisi to turning into a more authoritarian regime. In opposition to this, Turkey has been the only democratic government that has criticized the Sisi regime on every occasion.

The meetings Sisi conducted during the UNGA also attract attention. One of these meetings was with U.S. President Donald Trump. Since the start of Trump’s presidency in January 2017, this has been the fifth meeting between the two. The frequency of bilateral meetings also reflect the sign of strong cooperation between the two governments. This is also understood from the statements made by Trump during the meetings. While praising Sisi’s efforts in combating terrorism and instability in Egypt, Trump labelled his relations with Sisi as the “strongest” ever in the history of relations between the U.S. and Egypt. Trump also added that he would continue to work with Sisi on different fields such as military, trade, and fight against terrorism.

Trump has attributed special importance to Sisi for two main reasons. The first is that Egypt plays a major role in Israel’s security, and second, Egypt has a vital place in the Middle East policies of the U.S. These two issues are in essence closely related to each other. As a matter of fact, it can be argued that Washington’s main objective in the Middle East is to ensure the security of Israel. Trump’s close relations with Egypt can be considered in the light of this dynamic. With a regional alliance centered on Egypt, Saudi Arabia, and the United Arab Emirates. Trump aims to control the leading countries of the Arab world, thus preventing possible threats to Israel.

Sisi’s second note-worthy meeting was with Israeli Prime Minister Benjamin Netanyahu. During this two-hour meeting, the two leaders exchanged views on recent developments in Palestine and exchanged views on Middle East politics. This was the third meeting held between the two leaders since September 2017. Sisi and Netanyahu held their first public meeting at the UN General Assembly last year.

In May 2018, Netanyahu organized a secret trip to Egypt, where he met with Sisi as part of the ceasefire talks between Hamas and Israel. Netanyahu’s visit to Cairo took place after the U.S. moved its embassy in Tel Aviv to Jerusalem. During the days of the visit, Israeli police were busy attacking Palestinian protesters who opposed Trump’s decision to move the U.S. embassy. It is also important to note that Sisi was in total silence in the face of the Palestinians that were killed during the clashes with Israeli police forces.

Sisi’s frequent meetings with Trump and Netanyahu reveal that Egypt is under the full control of the U.S. and Israel, particularly with regards to their policies in the Middle East. It is fair to argue that the Egyptian regime does not represent the will and consent of the public but that it functions under the guidance of Washington and Tel-Aviv. This is not a new phenomenon. This began with the rule of Hosni Mubarak and continued for three decades until the revolution of 2011. The Morsi period was in contrast with this political landscape, as the Morsi government tried to follow an independent foreign policy in line with the direction of Egypt’s public opinion. However, this period was short-lived and the military coup on July 3, 2013, paved the way for Egypt to re-enter into U.S. and Israeli guidance.