South Africa: The Challenges of Liberation

South Africa’s negotiated settlement achieved a great deal in terms of the political liberation of the masses, but its poor, mainly Black, citizens still languish in ongoing economic subjugation. 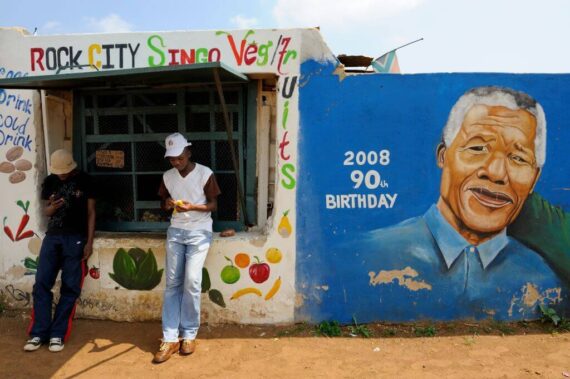 Mural painting illustrating anti-apartheid activist and former President of South Africa Nelson Mandela in the township of Orlando, in the urban area of Soweto. Photo by Frédéric Soltan/Corbis via Getty Images.

The story of South Africa’s anti-apartheid struggle is glorious, even romantic, that of its post-apartheid era, beginning with the country’s first democratic elections in April 1994, is less so. Less glorious, less romantic, more complex, more tragic.

The democratically-elected government, led by the African National Congress, inherited, in 1994, a state that had been designed to serve only one ‘racial’ group. State systems and institutions had been oriented in a well-thought-out system of racial capitalism that ensured that wealth and poverty were racialized. State policies contributed both to creating and protecting White wealth and to ensuring Black impoverishment.

Thus, the challenges facing a new government that hoped to ensure equal access to state resources by all citizens, including the almost-90 per cent politically and economically disenfranchised, were enormous, especially because it needed to be done in the context of a structural economic crisis caused partly by the global sanctions campaign against apartheid.

With this backdrop, many of South Africa’s post-apartheid achievements have been quite remarkable.

On a constitutional and legislative level, obviously-racist laws were repealed, and racism removed from most other laws. South Africa is often lauded for having one of the “most progressive constitutions” in the world, but the open, transparent and democratic process that led to its creation was also impressive.

And even though the ANC government rejected its social-democratic Reconstruction and Development Programme (RDP) in 1996 in favor of a more neoliberal approach, there are important achievements on the socio-economic front too. Millions of houses have been built for the poorest South Africans; from around one-third of the population having access to clean water in 1990, now more than 90 per cent does; and sanitation and electricity access have been extended to millions of additional households.

The social welfare net that already existed was improved, with the state increasing the amounts paid to citizens in pensions and social grants, and creating parity between the different ‘race’ groups. State-provided education and healthcare was made free, and facilities were desegregated. Much emphasis was placed on gender equality, with attempts to give effect to these provisions in the constitution, provide services to women (including those concerning gender-based violence), and so forth.

These worthy achievements do not, however, tell the full story of post-apartheid South Africa. South Africa’s negotiated settlement achieved a great deal in terms of the political liberation of the masses of its people, but, in many ways, its poor – mainly Black – citizens languish in ongoing economic subjugation. Even the socio-economic achievements mentioned above must be qualified.

Much of the problem has to do with the fact that two critical questions have not been dealt with, or not dealt with adequately, effectively or transformatively: the national question, and the economic question. This article will focus on the latter. 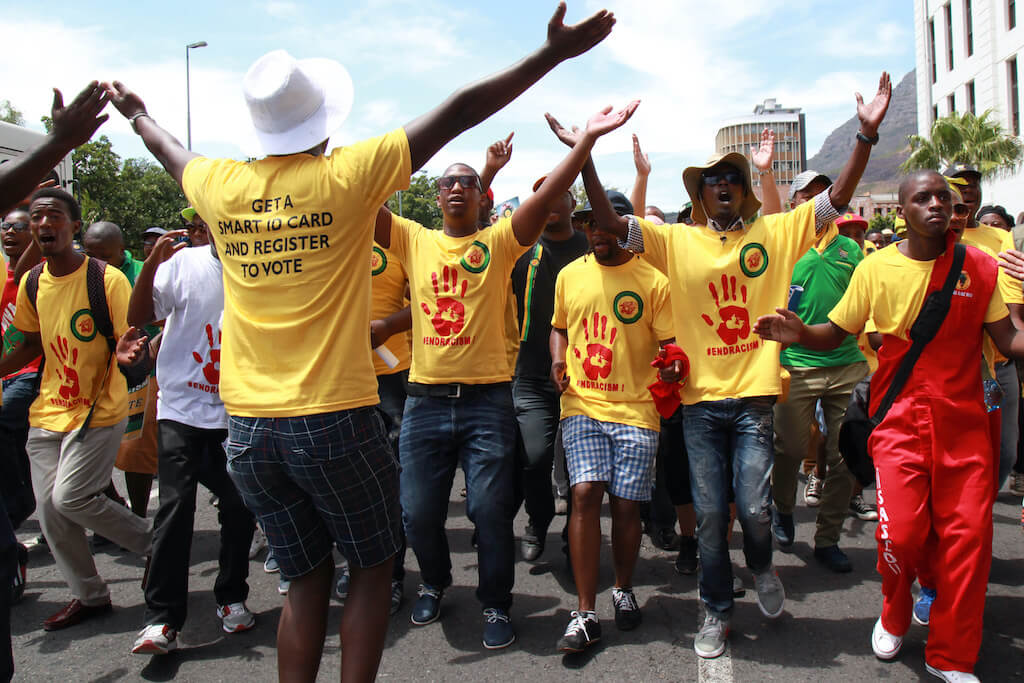 A group of supporters of African National Congress (ANC) shout slogans as they march towards Democratic Alliance's regional office building during a demonstration against racism in Cape Town, South Africa on January 22, 2016. Photo by Ashraf Hendricks. Anadolu Agency.

This includes the serious (and very emotive) issue of land ownership/control. At the beginning of 1994, over 80 per cent of the land was in the hands of whites, much of this in massive white-owned farms. Land reform programs promised much, but, 26 years later, only 10 per cent of the total land has been redistributed from white to black ownership.

Land reform programs promised much, but, 26 years later, only 10% of the total land has been redistributed from white to black ownership.

The land reform program was part of a larger attempt at the redistribution of wealth; another was BEE (Black economic empowerment, later BBBEE – broad-based Black economic empowerment). In reality, BEE was geared not towards eliminating the impoverishment of Black people, but in transitioning some Black people into the capitalist class. To some extent, it succeeded; a small group of Black faces have joined the economic elite.

This has not economically empowered Black people broadly; it has helped increase inequality (making South Africa one of the most unequal societies in the world). One of its results is that the inequality gap within the African part of the population hugely increased.

Having dumped the RDP in 1996, the ANC government adopted elements of neoliberal economic policy, with the assistance of World Bank and IMF advisers. I say ‘elements’ because the state also maintained elements of welfarism, with a great deal of resources being directed towards pensions, child grants and so forth. These welfarist elements are extremely necessary in a country with an unemployment rate of over 40 per cent, but they are also useful as bribes to ensure repeated reelection of the ruling party.

That the welfare net is not intended or designed for fundamental transformation is highlighted by the poor delivery of various kinds of services – even in the ‘achievements’ mentioned above, and in persistent inequalities in service delivery. Inequalities, e.g., in the education and health sectors are stark, with richer citizens using private schools and health services while the rest suffer with inferior services.

While many rich children attend fancy schools that resemble those in rich European countries, children in some rural areas are still taught under trees; while sick rich people get private healthcare, patients in overcrowded public hospitals often sleep on floors.

The discriminatory service delivery also extends to areas such as policing, with police brutality a serious problem. During the 2020 Covid-19 lockdown, at least eight South Africans – all Black and all poor – were killed by police. And despite excellent legislation relating to GBV, it remains a huge problem, and police handling of GBV cases leaves much to be desired. All these services, thus, have levels of privilege, with White men at the top and African women at the bottom.

Despite the increase in clean water access across South Africa, this too is discriminatory and affected by neoliberal notions of commodification. Among the poorest South Africans, 80 per cent have no running water, and a higher proportion have no toilets.

A tragic illustration of the problem is the case of Empangeni on the country’s east coast. In August 2000, the area experienced a cholera outbreak directly related to the provision of clean water. Within a year, over 100,000 people across the country had been affected, and more than 200 had died. The epidemic began in the squatter settlement of Madlebe, where residents began to be charged for water that, under apartheid, had been provided gratis. Unable to afford the costs, they resorted to unpurified sources, resulting in the outbreak.

Rapidly, over the course of a few years, a culture has developed within the political and economic elite of disregard for the marginalized because it is ‘now our turn to eat’, resulting in a lack of concern with service delivery and rampant corruption. In January, disability grant applicants – some in wheelchairs – in queues in Cape Town were attacked with police water cannons; the relevant minister was in attendance. Corruption among the political elite has lost South Africa hundreds of billions of dollars over the past decade and seriously affected service provision – especially to the poor.

Some of the cause of this state of affairs goes back to what former intelligence minister Ronnie Kasrils called South Africa’s “Faustian Pact”, which saw the ANC government take IMF advice and loans, refuse to cancel the apartheid debt, and adopt poor-unfriendly policies. While political negotiations in the early 1990s were transparent and open to proposals from citizens, economic discussions between ANC experts and local and British capitalists were behind closed doors.

In Kasrils’s words: “Inexcusably, we had lost faith in the ability of our own revolutionary masses to overcome all obstacles… The ANC leadership needed to remain determined, united and free of corruption – and, above all, to hold on to its revolutionary will. Instead, we chickened out. [We] needed to remain true to [our] commitment of serving the people. This would have given it the hegemony it required not only over the entrenched capitalist class but over emergent elitists, many of whom would seek wealth through black economic empowerment, corrupt practices and selling political influence.” 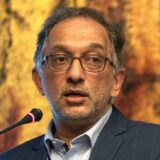 Na'eem Jeenah is the executive director of the Johannesburg-based Afro-Middle East Centre. His research areas include the geopolitics of the MENA region, security studies and South African and African politics.