The African Anthropocene: The Making of a Western Environmental Crisis

Anthropocene Africana – the unseen destruction of a whole continent – is in full gear. Climate change is a global existential crisis, but different regions of the world feel its impacts differently – and Africa, Asia and Latin America are already feeling the consequences of an enraged "mother nature". 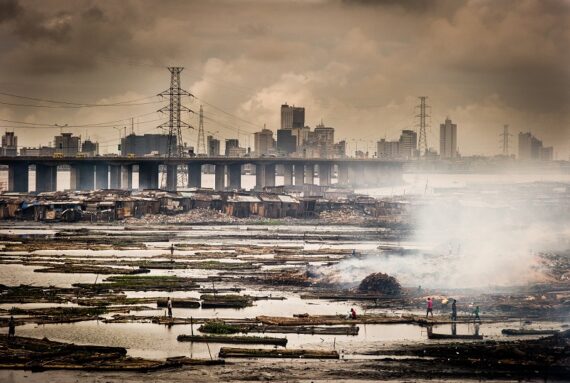 On Thursday 25 July, two boats carrying more than 300 African migrants capsized off the Libyan coast. Early reports suggested that almost 150 people – including women and children – were missing and feared drowned in the seas. The International Organization for Migration (IOM) reported that only 145 were rescued. This is a tragedy – one that follows many others in the Mediterranean Sea. Why are migrants fleeing some African countries in such large numbers, throughout the years? Are some African countries rendered inhabitable? What are the underlying factors that motivate migrants to seek better livelihoods outside Africa? There are many reasons as to why migrants flee Africa including violence, totalitarian regimes, joblessness, poverty and corruption. Importantly, Africa has entered a catastrophic geological epoch: the deadly Anthropocene – a geological epoch where human activities change the natural ecosystems beyond repair. Migrants are fleeing, along with other factors, an environmental catastrophe that is vast in its scope and scale, and undermining traditional means of livelihood and sustaining natural eco-systems.

Africa’s abundance of natural resources and minerals had a perilous and detrimental outcome for its diverse societies and peoples: colonial subjugation. At the eve of the infamous Berlin Conference of 1884, Otto Von Bismarck, the Iron Chancellor of Germany, made a speech that outlined a socio-political prescription for Africa: Christianity, civilization and commerce – the 3Cs. These three dictums had to be imposed on the continent and its peoples. They guiding mantras of the “white man’s burden” project for Africa and Africans. What was the outcome? Profits and prestige for European powers and capitols; plunder and pillage of Africa’s natural resources and minerals – and the decimation of whole ecosystems.

Half a century after the African decade – the 1960s: a decade many African colonies gained independence – Africa still faces cataclysmic eventualities. The population of Africa is already 1.2 billion and viable demographic policies are non-existent in many African nations. Poverty is an established norm. Natural disasters are recurrent. And above all, the continent’s natural landscapes – mountains, valleys, plains, forests and river beds – are being masticated by global corporations and inconsiderate profit-seeking companies. Collectively, African countries have the slackest environmental laws globally – and big corporations either do not heed or are oblivious to the few in place. Africa is unguarded and exposed to the hyenas, and their feast is only beginning.

Big cities in Africa are crowded; informal housing dot the landscape. Infrastructure is non-existent or obsolete. Traffic jams strangle Nairobi, Cairo and Dakar. Smog and pollutions choke Lagos, Addis Ababa and Accra. Today, some African cities are analogous to urban scenes from Alfonso Cuaron’s The Children of Men (2006). Africa is (and was, during colonialism) the epicentre of the anthropocene: decimation, destruction and plundering of its natural resources and landscapes are normalized. In the last decade, the anthropocene has been the subject of discussions in the academia, among environmentalists and in global climate conferences. However, Africa – where this new climatic catastrophe if unfolding most –feature less in these global gatherings. No one cares about Dambisa Moyo’s “sick child” of the world. Destruction and decimation of Africa’s natural resources is on steroids. Kwame Nkrumah’s warnings of neo-colonialism reflexes. The modern-day re-colonization of Africa through political, cultural, economic and technological regimes imposed on Africa by the former colonizers) coupled with the capitalocene – the anthropocene fuelled by capitalism and neoliberal logic– is wreaking havoc in Africa. In the meantime, the indifference and apathy towards Africa’s dooming anthropocene is disconcerting.

In The African condition (1980), the late African philosopher and thinker Ali Mazrui lamented the fundamental paradoxes that are characteristic and emblematic of Africa as a continent. For him at that time, and this is true even today, Africa is endowed with a wealth of natural resources but its societies and peoples are poor and destitute. And for Ali Mazrui, the culprits are obvious: the capitalist West, spearheaded by US. Ali Mazrui saw the cold-war politics and alliances as detrimental for Africa – African countries were obliged to choose sides, and this meant political and economic models that were incongruent with African needs, priorities and specificities. Today, those misplaced political and economic models are entrenched and institutionalized – and since 1991, neo-liberalism and its commercial ethos underpin Africa’s political economy and it is ravaging its natural bio-diversity and ecosystem.

Africa is home to five of the world’s top oil-producing countries. Africa has one of the largest oil reserves globally: Nigeria and Angola have a combined 120 billion barrels of oil reserves. But little is reflected socio-economically in both Angola and Nigeria. More importantly, the environmental degradation is insurmountable. Oil spills have destroyed the marine life in Nigeria’s and Cameroon’s Gulf of Guinea, the Niger Delta River and the surrounding geography. Global Environmental Facility (GEF) has documented 22 environmental pollutions in the coastal zones of the Gulf of Guinea. In 2018, the Nigerian city of Port Harcourt, once called the “garden city” was engulfed with black soot from the Oil refineries nearby. Residents complained of nasal and throat itchiness, cancer patients quadrupled and no one wears white clothes anymore.

Oil spills in Nigeria, Angola and Mozambique have raised newborn mortality rates. Nigeria’s version of “the deep horizon disaster” oil spill, has been devastating locals for more than 15 years, with no sight for accountability on the part of the companies. In Niger, another African country where natural blessings have become a curse, a uranium radioactive disaster by French companies unfolds. Pastoralist communities complain of contaminated wells and water sources. Almoustapha Alhasen, founder of a local non-profit NGO observed that “most common diseases are disruption of the hormonal system, cancer, infertility, birth malformations and psychological disorders.” Uranium mining across the Sahel region generated harmful pollutants and Radon, a harmful radioactive element that pollutes the environment for centuries. Interestingly, Areva, France’s biggest nuclear power company, pays no export duties, no tax on mining operations, but only 5.5% royalty on the Uranium that they produce, which powers France’s electric powers and economy – thanks to France’s geopolitical choke-hold on West Africa.

Unfortunately, Africa has the most relaxed environmental laws globally. The gamut of inept regulations that lack effectiveness coupled with global corporations that are hungry to devour and destroy natural resources for disproportionate profits is overseen by a clueless, naive and corrupt bunch of politicians, and is wreaking havoc throughout Africa. More importantly, this ecological catastrophe is pushed under the rug – ignored or reframed as an inevitable part and parcel of sustainable development and industrialization. Nevertheless, societies and communities incur the brunt and disasters of this outright disregard for nature and environment.

In Guateng province, South Africa’s kernel of Gold, Diamond and Uranium mining, the landscape is pierced by hundreds of quarries, shafts and abandoned tunnels. The 14 million residents of Guateng province complain of polluted air, clouds of dust (with radioactive elements) and an increase in respiratory diseases. The costs of air and water pollution in Africa are enormous. In a 2013 OECD report, pre-mature death rates caused by outdoor pollutions in African cities rose to 36% between 1990 and 2013. That is quarter of a million deaths every year. This pollution and destruction of the environment on a grand scale is also economically detrimental: According to the report, USD 215 billion was lost through natural resources destruction and contamination. The indifference and apathy of the African Union, the European Union and the United Nations relevant agencies is both flabbergasting and stupefying. A dystopian environmental disaster is in the making – and no one cares about it.

Noticeably, another major contributor to Africa’s air and water pollution is diesel fume emissions from cars. Interestingly, diesel and other petroleum products with the lowest qualities find their ways into African markets polluting the air and water of major cities like Dar es-Salaam, Kinshasa, Lusaka and Mogadishu. Gabrielle Hecht, the author of Being Nuclear: Africans and the Global Uranium Trade (2012), observes that companies like Vitol and Trafigura sell fuels with high-sulphur blends across Africa – qualities outlawed in the US and Europe. Environmental regulatory policies in Africa are a failure. African countries in collaboration with the AU and UN Habitat have to initiate environmental policy frameworks that protect Africans, first and foremost; enhance mineral, oil and gas mining that are ecologically friendly and contribute to economic growth.

Anthropocene Africana – the “unseen” destruction of a whole continent – is in full gear. Climate change is a global existential crisis, but different regions of the world feel its impacts differently – and Africa, Asia and Latin America are already feeling the consequences of an enraged “mother nature”. It is time to face and curb the havoc caused by the anthropocene coupled with the capitalocence – one which is displacing hundreds of thousands of migrants today, millions in the near future.