Sudan: On the Road to Revolution or Violence?

Sudan is at a crucial crossroad. The nation has to achieve positive ends after long protests that culminated in a partial revolution; the TMC has to midwife and complete the April revolution. 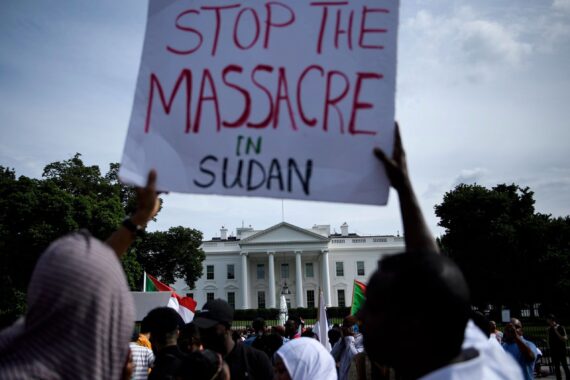 People protest against Monday's deadly military raid on a nonviolent sit-in in Khartoum, Sudan, outside of the White House on June 8, 2019 in Washington, DC. Getty Images

Sudan is going through a tumultuous transition period. During the holy month of Ramadan, tensions were simmering high: The Transitional Military Council (TMC) – the country’s governing body – and the Alliance for Freedom and Change – the umbrella representing the protestors – were in logger-head in their negotiations and the way forward for Sudan. Both parties couldn’t find a common ground for the nation – their positions are entrenched deep. And finally, after long negotiations, the military took a disastrous step in the wrong direction.

Monday June 3 will go down in Sudan’s history as the deadliest day in post Al-Bashir’s dictatorship and brutality. Close to 100 protestors were killed, and more than 300 injured – and the figures might continue to increase. On Monday morning the military moved into protestors sittings to break-up and disperse the crowd in-front of the ministry of defense; numerous live bullets were fired; anarchy and confusion reigned throughout Khartoum. At the end of the day, many protestors were shot dead and hospitals scrambled to cope with the injured. It was a gloomy day before the Eid celebrations.

The Sudanese Professionals’ Association (SPA), which led and spearheaded the months-long protests that brought down the regime of Omar Al-Bashir, called for more mass protests and a general civil disobedience after the Monday crackdown. Its spokesman Mohamed Yousef al-Mustafa, condemned and termed the military’s attempt to break-up the protestors’ sittings an “escalation and confrontation” that is dangerous, terming the military TMC as criminals that should have been treated like former president al-Bashir. The situation in Sudan is critical: any miscalculations or high-handedness can derail the transition process and consequentially thrust Sudan into possible anarchy, civil war or another military dictatorship.

The situation in Sudan is critical: any miscalculations or high-handedness can derail the transition process and thrust Sudan into possible anarchy, civil war or another military dictatorship.

Lieutenant General Abdel Fattah al-Burhan, the de facto head of state and the chairman of the TMC, condemned what happened on Monday in a press conference. He also criticized the Alliance for Freedom and Change for prolonging the negotiations; and asserted that they share part of the blame for what happened on Monday. In his speech he also announced that the TMC has suspended all negotiations with protesting groups, cancelled all that had been agreed on with protestors and announced a general election within nine months. He also promised that the killings and violence that occurred on Monday will be investigated. With the deadly incidents in Khartoum, the transition era in Sudan seems to have entered a new phase – one that is full of uncertainties and dangers.

Negotiations between the Transitional Military Council (TMC) and the Alliance for Freedom and Change has been going on since the military coup in April that toppled Omar al-Bashir. Protestor demands and vision for a post al-Bashir Sudan have been clear: a civilian led democratic political framework, a state governed by the rule of law and upholding individual basic human rights and liberties. However, Monday’s brutal crackdown indicates that the military and establishment aren’t ready to transfer power to a civilian government – the stakes seem to be high for both sides. And the Sudanese protestors are watching closely.

The Alliance for Freedom and Change came to the negotiating table with a clear demand: the TMC handing over power to a civilian government in the course of the transition period. Talks stagnated and at points even seemed to collapse. The perseverance and determination of protestors – even during the holy month of Ramadan – pressured the TMC: protestors would flock in high numbers to city and town centers all across the country. Finally, both sides agreed on a transitional government composed of the civilian and the military. However, the bone of contention was the composition: the military demanded to have a majority in the transitional government; the Alliance for Freedom and Change saw this as a betrayal of the peoples’ revolution and sacrifices. Talks stagnated and ultimately collapsed.

The brutal crackdown in Sudan indicates that the military and establishment aren’t ready to transfer power to a civilian government – the stakes seem to be high for both sides.

Both sides prepared and strategized as the month of Ramadan came to an end. Analysts anticipated that the real tag-of-war will come after the month of fasting. Hence, Monday’s attempt to disperse protestors could be translated as TMC’s pre-emptive move – and failed horribly. Protestors thronged Khartoum and Omdurman on Monday night. Monday’s massacre of peaceful protestors turned out to be a political hara-kiri for the TMC. Madani Abbas Madani, the leader of the Declaration of Freedom and Change, one of Sudan’s main opposition parties, rejected the TMC’s call for quick elections. Sudan seems to be entering an uncertain period politically. Moreover, lack of trust between both sides and escalations can tip the nation over the brink.

Furthermore, since coming to power, the leadership of the Transitional Military Council seemed eager to garner international and regional backing and support – empowering their political legitimacy globally. General al-Burhan visited Egypt, Saudi Arabia and the UAE – all key regional players – in the course of the last three weeks. With regional backing from key powers, the TMC seems embolden and takes matters into its own hands. This is dangerous for Sudan at this point in transition. Sudanese and Algerians remember what happened after the so-called Arab spring revolutions; protestors will not settle with anything less than a civilian democratic government, and a Sudan on the right path on human rights and freedom.

Tones of condemnations poured on the TMC since the Monday violence on protestors. The African Union commission chairman, Moussa FakiMahamat, in a press release condemned the crackdown on protestors and called for a transparent investigation. Moments after the the crackdown on protestors, the U.S. embassy in Khartoum tweeted: “Attacks against protestors and other civilians is wrong and must stop. Responsibility falls on the TMC,” underlining the U.S. position on Sudan. In a press release Turkey also regretted the loss of lives and called for peace and stability. Crisis Group’s regional director, Rashid Abdi, called for restrain on part of the military; and posited that unprecedented escalations could hurl Sudan into unforeseen turmoil and anarchy.

Regional leaders and the international community have to pressure the Transitional Military Council in Sudan towards the reform and democracy path.

Abiy Ahmed, the reformist Ethiopian Prime minister intervened and visited Sudan on 8 June – he met both the TMC and protest leaders. Regional leaders and the international community have to pressure the TMC towards the reform and democracy path: a multilateral effort is crucial for peace and stability in Sudan. The civil disobedience called for by the protestors on Monday was massive and heeded by the general public. Geopolitical interests also seem to frustrate the transition process and the protestors call for civilian and democratic rule. The interests and wills of the Sudanese people have to be central in the transition period – and in all negotiations. Reports of the arrest of protest leaders after they met Premier Abiy Ahmed are not promising and are in bad faith for subsequent negotiations.

Sudan is at a crucial crossroad. The nation has to achieve positive ends after long protests that culminated in a partial revolution; the TMC has to midwife and complete the April revolution. A civilian government that represents the military and the whole spectrum of Sudan’s political and civic movements is paramount. Protest leaders, women and the youth have to have a place in the transition process. Sudan can only overcome this political cul-de-sac through restraint on both the TMC and protestors (who are peaceful), and the maintenance of peace and respect for human rights. Reports of bodies dumped into the Nile River by the Rapid Support Forces (RSF) are desolating and disheartening. May peace, justice and prosperity reign in Sudan – and the whole world.