Online streaming services are not neutral spaces, they inculcate an ideological position or worldview through “soft” manipulation. They have the power to instill marginal ideas that can be harmful and problematic, both on an individual and social level. 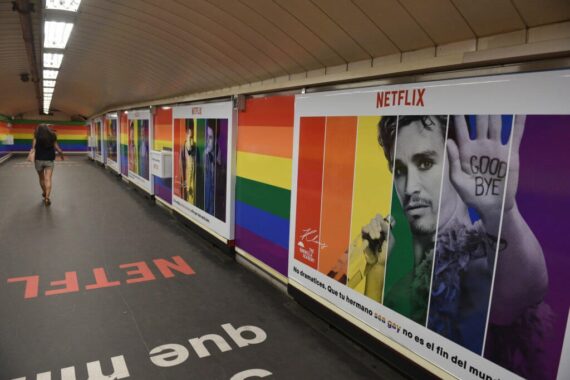 An advertisement of Neflix with messages supporting LGTB people is seen at Chueca metro station in Madrid before the official opening of the MADO 2019 Gay Pride. 03/07/2019 Madrid, Spain. Getty Images

Terry Eagleton contends in Why Marx Was Right: “Marx thought that those who controlled material production tended to control mental production as well. The claim has even more force in an age of press magnates and media barons than it had in his own time.” Analyzing today’s conditions, Eagleton continues from what Marx wrote in The German Ideology that “the ideas of the ruling class are in every epoch the ruling ideas, and argues that the mobility of mass media is even more effective in spreading the ruling ideas to the masses in today’s world compared with previous centuries. Considering the patronage of global media outlets and the capital owned by companies like Facebook, Twitter and Instagram, we see that Eagleton is quite right in his argument.

New internet technologies have introduced a series of transformations to conventional media structures. For instance, twenty years ago, audience movie watching habits were shaped by television and cinema. But today, digital platforms that provide online streaming services seem to have taken hold of these habits. Therefore, such platforms, which have a considerable number of active subscribers, have a major impact in the spread of ideas. Aside from positive impacts, inappropriate content such as terror propaganda, hate speech or child pornography could also be spread via online platforms, proving that this is a delicate issue requiring a profound analysis. For this reason, the supervision of online platforms is a vital issue in today’s world. In the absence of a global institution or international legal infrastructure authorized to supervise online streaming persons or companies, countries are compelled to take their own measures to fight against the harmful content.

Amid the lack of structural supervision, and excluding clearly unlawful and illegitimate streaming mentioned above, online outlets overall reflect the ruling ideas as pointed out by Eagleton. It is true that Netflix, Amazon and other streaming services are still required to adhere to state laws and are not devoid of regulation. But such ever-growing networks and platforms convey content to viewers on a global scale. The main problem with these streaming services is that they are not neutral spaces, they inculcate an ideological position or worldview through “soft” manipulation. They have the power to instill marginal ideas that can be harmful and problematic, both on an individual and social level.

In Turkey, the new bylaws introduced to regulate online radio, television, and on-demand broadcasting have recently spurred public controversy. In line with the legislation approved by the Turkish Parliament in March 2018, the “Regulation on the Web-Based Presentation of Radio and Television Broadcasts and Video On-Demand Services“ entered into force upon its promulgation in the Official Gazette of August 4, 2019. This regulation aims to establish a control mechanism for on-demand and web-based platforms that have recently grown in popularity in Turkey such as Netflix, BluTV and PuhuTV as well as other radio and TV stations performing online broadcasting. Said to be prepared with the aim of “preventing the exploitation and manipulation on the internet”, the regulation has been viewed as censorship by some people, whereas some others have welcomed it as a regulation that guards Turkey’s economic interests since it has introduced a control mechanism and enabled authorization through licensing. The main reasons for enacting this regulation seem to be the necessity of bringing a set of legal measures that will protect the Turkish market in terms of competitiveness and the need to control inappropriate broadcast content especially on Netflix via a body established within Turkey’s Radio and Television Supreme Council (RTÜK).

Criticisms of the Regulation

The biggest criticism directed to the regulation revolves around the concern that the control on press and broadcast media in Turkey will also encompass the internet and this might restrict freedoms. Another commonly expressed criticism is that dissident platforms who provide alternative broadcasting on the internet might be affected by the new regulation and might confront some challenges in maintaining their activities. Another criticized aspect is that on-demand platforms will be subject to content control and their broadcasting activities will be authorized through licensing, which raised concerns that such platforms might leave the Turkish market and Turkey might be evaluated in the category of countries imposing censorship. All the criticisms are based on the presupposition that checking online content is a kind of censorship and freedoms will be restricted through this way.

Despite these criticisms, after being subjected to the regulation, Netflix issued the following statement: “Turkey is an important country where we want to continue to create joy for our members, partner with Turkish talent and invest in the economy and film industry,” hinting that they aspire to keep their presence in the Turkish market. So, there is a contradiction between the statements of a business organization directly subjected to the scope of the regulation on the one hand and the concerns expressed by critics based on some presuppositions on the other. The former expresses its wish to maintain its broadcasting activities in Turkey by complying with the regulation while the latter brings forward a discourse of censorship and restriction of freedoms without taking note of the regulation.

The Aim of the Regulation and Similar Cases in Europe

The regulation aims to protect the competitive environment in Turkey by controlling and licensing web-based television and radio broadcasts. The regulation reads: “A set of measures, such as enabling parent control for media content that might harm the physical, mental or moral development of children and youth, will be taken in the web-based presentation of radio and TV broadcasts and video on-demand services,” which indicates the purposes of the content check.

From a comparative perspective, it can be seen that various counterparts of RTÜK are operating almost everywhere in the world and checking the content of web-based broadcasts. For instance, the EU, which does not limit its activities to web-based platforms like Netflix, regards the supervision of all the internet media that enable video sharing as an important factor. With the Audiovisual Media Services Directive, the EU is expanding the scope of its legal regulations of social media companies and web-based broadcasting platforms, particularly against the threats of terror and radicalization, child pornography, violence, hate speech and fake news in light of new developments. Similarly, following Netflix’s launch in France, the French government issued several declarations on the rules to be observed by Netflix. Netflix is also required to pay tax on its turnover in France and asked to contribute to a support fund for the film and audio-visual sectors.

In the UK, a set of regulations has been made to fine or block websites that do not take necessary measures to prevent harmful content such as child abuse and terrorist propaganda. The Department for Digital, Culture, Media & Sport and the Home Office recommended that a guideline addressing technology companies should be prepared by an independent supervisory authority. Stating that companies do not take necessary steps to prevent harmful content on the internet, government officials said: “the era of self-regulation for online companies is over,” stressing the significance of the supervision issue for the UK. The UK officials stated that the subjects like terrorism, sexual abuse, threats, hate crimes and trafficking of illegal substances are in the scope of the related law, adding that the regulations will also apply to the social networking platforms like Facebook, Twitter, Google and Snapchat.

In the final analysis, this new rule, which has entered our lives with the RTÜK regulation, is an important initiative towards resolving the supervision problem that has been discussed for a long time, although it still has some ambiguous points. The regulation introduces a control mechanism in the Turkish market and regulates the conditions of competition accordingly. Characterizing such regulations as “censorship” without considering their scope and content makes it difficult to understand the rising protectionist and regulatory trend around the world. As Eagleton points out, states regard the legitimization of ruling ideas through the use of media as a cultural problem, therefore, we need to understand governmental practices via regulations from a broader perspective.