“In case of an attack by the Ukrainian army, the Donbass forces will not stop at the border of the former Donetsk and Lugansk regions” says Denis Pushilin, the leader of the Donetsk People’s Republic. 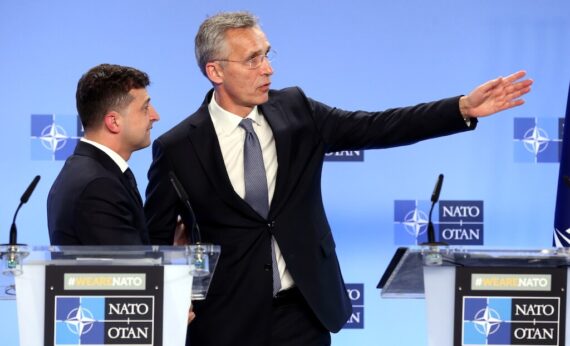 While the fate of the current military escalation between Russia and Ukraine remains uncertain despite the incidents in the Donbass, diplomatic tensions are on the rise. The international community is closely following the recent border developments between Moscow and Kiev.

The United States declared its support for Ukraine’s entry into NATO as the possibility of a serious military conflict with Russia on Ukraine’s territory is increasing. Russia has warned that Ukraine joining NATO would not solve the issue of the Donbass and would further complicate the situation.

Since the Euromaidan public protests, Ukraine has been declaring its wish to join NATO and become an active member of the North Atlantic Alliance. In 2017, the Ukrainian Parliament passed legislation declaring NATO membership as a national goal, and a corresponding amendment was made to the country’s constitution in 2019.

Since then, NATO missions have established themselves in Ukraine and trained Ukraine’s army. Ukraine maintains high tensions with Russia, which has cost the country its loss of Crimea.

The United States has declared its support for Ukraine’s NATO membership as it advocates Ukraine’s “territorial integrity,” but ultimately the decision must be made by NATO members. This means that the United States wants the conflict in Ukraine to continue in order to use it in the fight against Russia.

In this case, all NATO member countries will take collective responsibility for the escalation of the conflict with Russia and the risk of a direct confrontation. Being far from the United States, however, this conflict would place Europe in a serious position of directly countering the Russian incursions into Ukrainian territory.

Volodymyr Zelensky, the president of Ukraine, believes that only if Ukraine becomes a member of NATO, it will be possible to put an end to the conflict in the Donbass. Meanwhile, Dmitry Peskov, the Kremlin’s spokesperson, warns that this decision cannot be taken without the support of his people, as most of the population in Eastern Ukraine oppose such a move.

On the other hand, the Russian Ministry of Foreign Affairs claimed that the Ukrainian army is increasing its provocations on the border line, endangering the civilian population, including Russian citizens in the Donbass, and that Russia is ready to defend its security, whatever the costs. Peskov and the ministry both stressed, without going into details, that the security of the country and Russian citizens remains the priority of the state and president.

Read: NATO Emphasizes Unity without Consensus but China May Change This

While the political quarrel continues to escalate, videos appeared on social media showing NATO tanks entering Ukraine through Poland and heading to the front line. The tanks are in addition to the accumulation of artillery, infantry, Ukrainian air force, and NATO advisers on the borders of the Donbass.

Denis Pushilin, the leader of the Donetsk People’s Republic, at a press conference on 60 Minutes on April 7, 2021, stated, “In case of an attack by the Ukrainian army, the Donbass forces will not stop at the border of the former Donetsk and Lugansk regions.” In other words, it becomes clear that there is a grave risk of an all-out war between Russia and Ukraine as any hostile incident at the Crimea-Ukraine border will not be contained.