Macron’s attempt to enter Syria through the back door not only remind us of the ignominious policies during the French Mandate for Syria, but suggest he still has some road to travel before becoming a man in international politics. 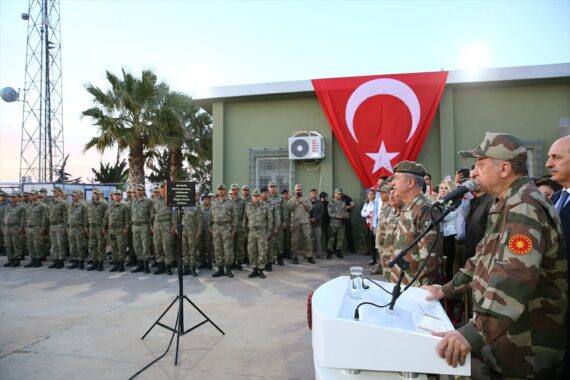 President Recep Tayyip Erdogan made a surprise visit to Turkey’s southern Hatay province last Thursday. As Operation Olive Branch continues to take ground, the visit was welcomed by a sizable audience, with the participation of some celebrities ranging from singers to national athletes.

Prior to the speech given in the late hours of the evening in the southern region of the Hatay Province, President Erdogan, accompanied by the Chief of General Staff Hulusi Akar, Deputy Prime Minister Bekir Bozdag, Defence Minister Nurettin Canikli and Land Forces Commander of the Turkish Armed Forces Gen. Yasar Guler, visited the Turkish military units to inspect the progress and congratulate the military men for their celebrated efforts.

The operation in Afrin, beginning in January of this year and ending last month, has been hailed by people in Turkey and those in the northwestern regions of Syria as not only a success against the PKK/PYD tyranny, but also on the fact that it has become one of the numbered peaceful places within the calamitous ongoing Syrian Civil War.

During his speech at the central police station, Erdogan adulated the wholeness of the people as being the foundation to protecting collective sovereignty, praised the solidarity of the public figures and celebrities for their presence, and thanked all the civilian care networks such as AFAD (The Disaster and Emergency Management, Republic of Turkey) to the Health Ministry for their support and determined efforts to help those in need. Lastly, while displaying his gratitude and respect towards the indispensable efforts of the Turkish Military, he quoted Gazi Mustafa Kemal in saying “There is no such thing as protecting the line, there is only protecting the ground, and a unified ground is what makes a nation.”

In recent years the YPG, the Syrian branch of the internationally recognized terror organization PKK, has increased its activity emanating from Syria since they took advantage of the Civil War and occupied the northern regions in 2012. The PKK/YPG has mostly focused on carrying out cross-border missile attacks on the Provinces of Hatay and Kilis, having fired more than 90 rockets in 2018 alone.

So far, two Syrian and three Turkish citizens have been killed, with over 100 casualties, of which numerous are still in critical condition. Together with human deaths, some of those who have survived are effected by a slow bombardment that their homes, vehicles and neighborhoods were destroyed.

With the Afrin operation coming to an end, direction has now turned to the Manbij. Separated by the Euphrates river from the rest of the YPG/PKK controlled areas of northern Syria, Manbij is another important territory in which Turkey seeks to relieve the areas inhabitants from unwanted occupation while protecting Turkish lands from further terrorist threats.

While recently there has been speculation of French intervention in the region as a mediator between Turkey and the YPG, Ibrahim Kalin, the spokesperson for the Turkish Presidency has firmly indicated that Turkey “rejects any efforts to promote ‘dialogue,’ ‘contact’ or ‘mediation’ between Turkey and terrorist organizations.”

When compared to Turkish endeavors, both Euphrates Shield and Operation Olive Branch have not only conformed with International Law, U.N. Security Council resolutions and her right to self-defense under the U.N Charter, but has been an effective and efficient method in maintaining the unity of Syria’s territorial integrity.

The successful completion of Afrin operation seems to have ruffled some international feathers however, bringing previously absent players into the spot light. Considering much of the brutality is over when compared to the bulk of the civil war, Macron’s attempt to enter Syria through the back door not only remind us of the ignominious policies during the French Mandate for Syria, but suggest he still has some road to travel before becoming a man in international politics.