Systemic Racism in the U.S. killed George Floyd, not Trump

Floyd is dead because American history is full of racial inequalities against African Americans from the very first day of Mayflower’s arrival to the New World. 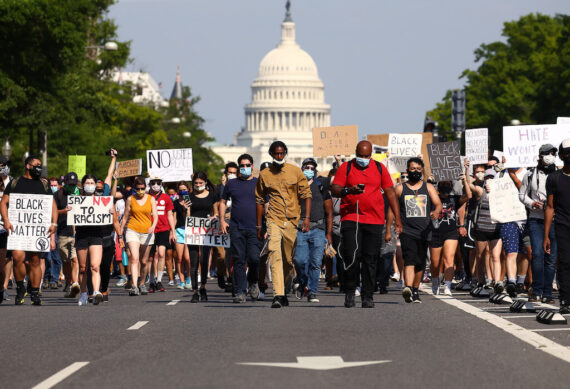 Demonstrators march down Pennsylvania Avenue near the Trump International Hotel during a protest against police brutality and the death of George Floyd, on June 3, 2020 in Washington, DC. Photo by Tasos Katopodis, Getty Images

The United States was shaken by the death of black American George Floyd, who was pinned to the ground as police officer, Derek Chauvin, knelt on his neck for nearly nine minutes on May 25th and three other officers looked on. His last words, “I can’t breathe”, have become a motto for the millions who took to the streets to protest the violence against black people and the Trump administration’s handling of the issue. Floyd’s death sparked mass demonstrations in cities across the US, demanding an end to racial injustice and police brutality. Yet the peaceful demonstrations partly turned into violent protests and many people started to defy violence and looting. The murder was further politicized when President Trump declared the protestors as “anarchists” and “radical left”. The United States has now been soul-searching on how to end racial inequalities and securing law and order.

After thousands flooded the streets of Minneapolis to protest the killing of Floyd, four officers involved in his death were fired. Protests spread to major cities across the country, including New York City, Washington DC, Los Angeles, Memphis, Denver, and others in a couple of days.

Lafayette Park across from the White House became the center of the “I can’t breathe” protests, and soon turned into an anti-Trump base. President Trump’s reaction was to call the protesters “thugs” and take to Twitter saying: “When the looting starts, the shooting starts.” The tweet caused an outrage and was labeled as “glorifying violence” by the American public.

National Guard soldiers were deployed in some states; nighttime curfews were imposed and Donald Trump vowed to suppress the “thugs”. As nationwide protests continued, Trump said the administration would list far-left, anti-fascist movement “Antifa” as a terror group. Trump doubled efforts to stem the protestors and threatened to deploy the military if states and cities failed to quell violence during protests. Trump’s controversial visit to St. John’s Episcopal Church in Washington, DC marked a turning point as the pundits blamed Trump for mixing religion with politics.

Read: Racism Has a Tradition in U.S. Politics

Demonstrations continued for almost three weeks in major cities from Los Angeles to New York and Chauvin faced second-degree murder charges. The other three officers were charged with aiding and abetting murder in the second degree. Eventually nighttime curfews were ended, National Guard soldiers drew back, and cities returned to normal. Floyd was laid to rest with memorials in Minneapolis, Houston, Texas, and North Carolina.

Number of people gather at the 16th street "Black Lives Matter Plaza" near the White House to mark the 155th anniversary of Juneteenth, end of slavery in Washington, DC, United States on June 19, 2020. Photo by Yasin Ozturk, Anadolu Images

The United States has now seriously divided into two main camps: Trump-lovers and Trump-haters. It is unfortunate that there is no middle-way between these two polar opposites. It’s becoming increasingly common to view everything that happens in the U.S. under these two main perspectives. Floyd’s tragic death could have led to a broader consensus going beyond this bipolar politics, yet it failed. Floyd is dead because American history is full of racial inequalities against African Americans from the very first day of Mayflower’s arrival to the New World. This story didn’t change much when African Americans got their “legal freedom” in 1865. American history books are full of lynching stories awful enough to fill one’s heart with horror. The idea is simple – the main reason why police brutality against black people hasn’t been averted in the U.S. is that it’s a systemic and institutional problem.

Data from 2019 of all police killings in the U.S. compiled by Mapping Police Violence shows that black Americans are nearly three times more likely to die at the hands of the police than white Americans. Other statistics have shown that black Americans are nearly one-and-a-half times more likely to be unarmed before their death. In 2019 alone, black people were 24% of those killed despite only being 13% of the population.

Another dimension of systemic racism is the lack of accountability of police officers whose actions have led to the death of a black person. “Mapping Police Violence” also tracked what had been happening in the aftermath of any white police officer killing an African American citizen. According to data, they reveal more than 200,000 internal investigations that were opened against approximately 85,000 police officers over the last 10 years. Yet, most of them were internally closed without any submission to the jurisdiction. All these speedy internal investigations seem to have set a precedent for officers dealing with black people.

There is one last thing about why a white police officer could kill Floyd so easily: the lack of education. This subject is sometimes not given due attention, yet it’s as important as other items on racial inequality in the U.S. A high school diploma or equivalent is enough to be considered qualified to get admission into police academies where the training lasts between 13-19 weeks. This implies that many American police officers do not have adequate education on the issue of racial profiling. As a result, systemic racism in the U.S. carries on with impunity as a lack of education and racial bias continues the problem of police brutality against African Americans in different parts of the country.

Any gain from the nationwide protests?

As the nationwide protests spread the flame of Black Lives Matter through Washington D.C., Democrats stepped up to change some laws to honor Floyd’s memory. The House Democrats have unveiled some resolutions targeting police misconduct and racial bias; there is no concrete outcome yet. On the other hand, President Trump signed an executive order last week in an effort to bring significant reform to law enforcement. Trump’s order will ban police from using chokeholds “except if an officer’s life is at risk,” as part of a wider effort to incentivize police departments to adopt nationwide standards. Those that choose to be certified by independent credentialing bodies will be eligible to receive Department of Justice grants under his order.

Some people believe that neither Trump nor the Democrats could have done more, so we should accept what has been done so far. Others don’t acknowledge Trump’s executive order as a “success for their mission” and demand more structural changes like “abolishing police departments” or “defunding” them. This is where the politicizing of Floyd’s death starts: Trump and the GOP have strongly spoken out against this kind of “anti-police” discourse and blame the Democrats for paving the way for it. The Democrats and Trump’s rival, Joe Biden, cautiously tried to balance this dilemma between rectifying police departments from racial bias and avoiding being labeled “anti-police.” A nationwide awakening on racial inequality and police brutality against black people is a big plus for those who took to the streets for George Floyd. But, at the end of the day, nationwide protests for Floyd have only made minor police reforms possible. Trump’s executive order and the Democratic bids are important gains to some extent, yet they are far from an overhaul of systemic racism in the U.S.

A steel fence at Lafayette Park turns into a makeshift memorial at 16th street after DC Mayor Muriel Bowser has renamed that section of 16th street "Black Lives Matter Plaza" near the White House on June 16, 2020 in Washington, DC. Photo by Yasin Ozturk, Anadolu Images

Will this affect the elections?

The Covid-19 pandemic has hit the U.S. hard at a historic level both mortally and economically. As the country approaches the November 3rd elections, sound economic structure has been Trump’s main driving force, but the pandemic has hit his ‘trump’ card hard. Millions of people have lost their jobs and the unemployment rate has skyrocketed to about %15. Honestly speaking, this will likely be a bigger issue in the elections for the American people than Floyd’s death and police brutality. That doesn’t mean that Floyd’s tragedy won’t affect anything as the clock ticks but the effect of these nationwide protests will likely be limited to some voters. As Trump portrayed himself as the man of “law and order” during violent protests, his Republican base would likely find his strategy to be okay.

Although Joe Biden leads the race according to almost all the nationwide polls, Trump’s GOP base seems unwavering. Floyd’s death and its aftermath would likely affect some black American voters when it comes to casting their votes in November. In that sense, swing states will be more important to win the Electoral College. Yet, economic recovery or collapse will still be the main driving factor for many Americans to choose their next president. Other than the issue of the economy, Trump-lovers still love him and Trump-haters now hate him more than ever. Beyond the U.S. elections, if the systematic racism in the U.S. is not systematically addressed, many racially segregated people in the country will continue to fall victim.

Hakan Copur received his BA from Istanbul Bilgi University and completed his MA at Marmara University. After 5 years at public service, he started to work for Anadolu Agency Washington DC Bureau in 2015. He has worked as the US News Editor of Anadolu Agency until July 2022. He’s been then appointed as TRT US Representative in Washington DC.