The June 24 elections were the first general elections that were held in the aftermath of the failed military coup attempt on July 15, 2016, and as such they represented the dawn of democratic normalization and a potential end to the state of emergency that was declared after the coup. 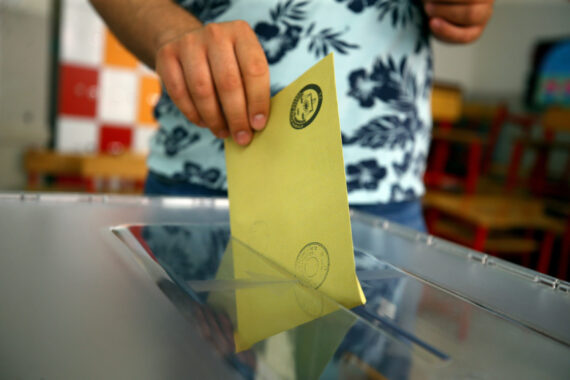 An envelop including ballot papers is seen at a polling station during the parliamentary and presidential elections, in Konya, Turkey on June 24, 2018. Anadolu Agency

After weeks of intensive campaigning and eager anticipation, Turkey successfully accomplished yet another test of democratic maturity by holding the combined general and presidential elections last Sunday. The fact that these elections constituted a milestone for the paradigmatic transition towards the presidential government system ensured that they were fiercely fought by both the government and the opposition parties with the notable addition of public relation initiatives by the presidential candidates. These were the first general elections that were held in the aftermath of the failed military coup attempt on July 15, 2016, and as such they represented the dawn of democratic normalization and a potential end to the state of emergency that was declared after the coup.

Despite all the hype and misinformation in mainstream international media accusing President Erdogan of authoritarianism and the government for suppressing the political opposition, pretty much all the stakeholders agreed that the elections were held in an open, free and fair environment. The campaign trail was peaceful and turned the whole country into a festival zone via vibrant promotion endeavors by the parties and candidates.

On election day, voter turnout was around 87 per cent which represented one of the highest participation rates in Turkey’s democratic history, comfortably surpassing most of the established democratic polities in the world. Electoral alliances ensured that the ten per cent threshold for entry to the parliament was not applied and almost 99 per cent of the votes cast for political parties were reflected as parliamentary representation.

The incumbent Justice and Development Party (AK Party), the Nationalist Movement Party (MHP), the Republican People’s Party (CHP), the Peoples’ Democratic Party (HDP), the Iyi Party, the Democrat Party (DP), the Felicity Party (SP) and the Great Union Party (BBP) will be represented in the forthcoming parliament. The parliament will be one of the most representative and inclusive parliaments in Turkey’s political history. So there is no discussion concerning the procedural validity or democratic legitimacy of the election results.

When it comes to gauging the winners and losers of the elections, President Recep Tayyip Erdogan emerged undoubtedly as the biggest winner with yet another crystal clear victory over his political opponents. He received over 52 per cent of the total votes and was successfully elected in the first round as the first president of Turkey under the new presidential government system. Being the dominant political actor who placed his mark on Turkey’s political, economic and social transformation over the course of the 2000s, Erdogan managed an effective campaign and confirmed once again that he retains the confidence of the Turkish electorate going forward as the most credible leader.

Erdogan has been in power as Prime Minister and President for the last sixteen years without interruption and managed to record thirteen election victories. Despite risks of democratic fatigue and popular reaction to some of the government actions by certain social groups, the personal political popularity and societal approval of Erdogan seems to withstand the toughest tests of time. While clinching his latest landslide victory in the presidential elections, he managed to receive nearly eleven million votes more than his closest rival Muharrem İnce. It is really very difficult to cite another political leader in the modern democratic world with such strong and consistent democratic credentials.

The reluctance of Western media to understand and analyze the uniqueness of the deep bond between Erdogan and the Turkish society lets them to confuse unrivaled democratic legitimacy with authoritarianism. The Turkish President displays exceptional capacity to create a popular blend of socio-economic stability, structural transformation, improved public services, increased living standards and identity politics which is translated into sustained electoral success.

But it was also interesting to note that for the first time in these elections there was a ten per cent gap between Erdogan and his Justice and Development Party (52 to 42 per cent) which indicated a performance divergence. Although the People’s Alliance, comprising the AK Party (295 MPs), MHP (49 MPs) and BBP (1 MP), which was born out of the popular resistance to the July 15 coup attempt clinched a clear parliamentary majority, Erdogan in his traditional balcony speech on election night frankly expressed that he received the ‘message of the electorate’ and will oversee a thorough post-election analysis.

So far, taking electoral demands, reactions, or signals swiftly into account through rational and well-researched analyses has been one of the greatest strengths of Erdogan. Therefore, it is pretty likely that he will gather detailed reports concerning the dynamics that affected AK Party votes in certain cities as a result of candidate selections for the parliament, performance of local administrations, or certain economic policies. Therefore, the post June 24 process will witness Erdogan’s multifaceted attempts to oversee a great transformation in the institutional structures of the Turkish state, while keeping the electoral strength of his AK Party in check going forward to the municipal elections next March.

Sunday’s elections also opened a new chapter in Turkish politics as the new electoral regulations allowed alliances between different political parties, thereby making the ten per cent national threshold obsolete. As voters made it absolutely clear that local representation is important to them, legal reforms could be made to lower the national threshold or create some form of single-member district system in the near future. Incidentally, strategic voting which implied certain shifts among allied political parties was one of the most important factors leading to surprising results in view of preceding public opinion polls. As the presidential government system becomes more institutionalized, it is highly likely that strategic voting and issue-based alliances among different political groups will become more pronounced. Therefore, leading political parties and their leaders will have to adopt their ways in line with the emerging patterns of pragmatic voting behavior.

The Nationalist Action Party (MHP) clearly gained from its alliance with the AK Party and the rising national sentiments in the wake of military operations in northern Syria, gathering critical parliamentary representation with 49 MPs. The leader of the MHP, Devlet Bahceli, was among the winners of the electoral process by managing to keep his party above the eleven per cent mark and maintaining his strategic alliance with Erdogan despite the recent internal division within his party which gave birth to the Iyi Party. In the context of the strong executive that will be formed with the presidential system, MHP has great potential of acquiring a degree of political effectiveness that goes much above its numerical presence.

Another winner who came stronger from the campaign trail and election experience was Muharrem Ince who ran as the presidential candidate of the CHP. Ince, a long-time domestic opponent of CHP leader Kemal Kilicdaroglu, was nominated as the presidential candidate in an almost futile race against the towering figure of President Erdogan probably in an attempt to undermine his future party leadership aspirations. Yet Ince as a pragmatic figure who could address the radical secular groups that characterize the backbone of the CHP as well as relatively conservative voters in central Anatolia displayed a surprising performance and personally received eight points higher than his party.

Differing from Kilicdaroglu in his more mature reactions, Ince congratulated Erdogan’s election victory and declared that he will continue his public meetings after the elections, signalling a leadership clash within the CHP. Both CHP and Kilicdaroglu were among the main losers as the party vote stood around a disappointing twenty two percent, while their strategic moves aimed at keeping the Iyi Party and the PKK-affiliated HDP above the ten per cent threshold caused numerous criticisms from within the party organization.

Meral Aksener, the leader of the newly established Iyi Party was another loser as she received unlimited public support from international media during the campign as the chief candidate that could undermine Erdogan’s authority. But despite all the media hype, Aksener’s personal electoral support did not even reach to the ten percent mark and her fragile party might well disintegrate in the parliament. Finally, HDP was another loser as the support for its leader Selahattin Demirtas fell three points to seven per cent, while party votes reached eleven per cent with the controversial tactical support of CHP supporters which was later criticized for legitimizing a terror-affiliated group.

As soon as election results were declared President Erdogan adopted a reconciliatory tone and expressed that the institutionalization of the presidential system will proceed through an inclusive process with the contributions of different social sectors, business actors and NGOs. He is keen to embark on a democratic normalization and development endeavor through which the state of emergency will be gradually lifted, structural reforms in the economy will be swiftly implemented and new productive synergies will be created to galvanize Turkey’s position as an emerging power in the global system. If the Western world decides to support this endeavor by accepting respectable and equitable forms of interaction with Turkey rather than portraying Erdogan as an ‘old-school third world dictator’ and blackmailing him through political or financial means, a positive environment of win-win situations could emerge sooner rather than later.