Stories of the Nakba still harrow us and live in us, giving us hope of return. Palestinian Nakba survivors have not forgotten their homeland 73 years on. 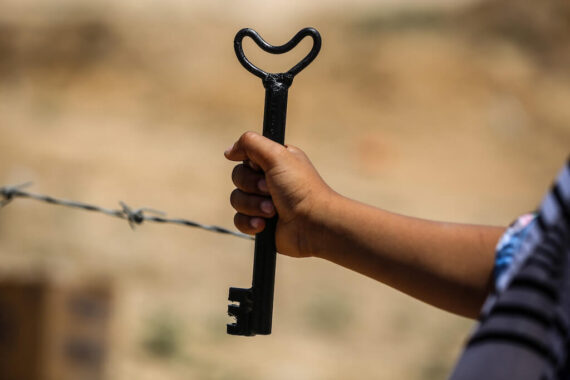 A Palestinian boy holds a key symbolizes the Palestinian settlements demolished by Israel Authority near Beit Hanoun Checkpoint in Gaza City, Gaza, on May 15, 2017. Photo by Ali Jadallah, Anadolu Images

Years after establishing Israel on Palestinian lands in 1948, Israeli leaders were certain that the old Palestinians would die and the young would forget. But today, 73 years later, the old still remember and the young are more determined for freedom and return.

Between 1947 and 1949, Jewish militias and Israeli army expelled from 750,000 to 1,000,000 native Palestinians, committing over 20 massacres and destroying and depopulating over 400 villages. This is what made Israel.

In the years leading to 1948 Nakba (or catastrophe), Jewish militias had amassed weapons and western support and complicity and it was becoming clear to native Palestinians that these European gangs wanted one thing: forcefully expelling all Palestinians at all costs.

Omar Abedelal, 82, was only 9 years old when he along with his family members and neighbors was displaced from his village Burayr. They were forced to flee as the Jewish militias were closing in on Palestinian villages, burning, plundering, looting, and massacring.

“We left behind the most fertile fields in the area. Just months before the Nakba, I was tending the land, daydreaming about my future. My father worked that land. My father’s father did before him and so many generations before,” recounts Omar Abedelal, as he remembered they were planning to harvest the wheat the year of the Nakba.

Omar Abedelal never forgets. He and millions of Palestinian refugees in Palestine and in the diaspora still cannot forget their inalienable right of return. Stories of the Nakba still harrow us and live in us, giving us hope of return.

He says, “Our village resisted the Jewish militias with what little we had. But the well-armed Zionist gangs were singling out unarmed civilians and butchering them in hundreds. Weeks before the Nakba in 1948, armed Jewish militias besieged our village Burayr and pushed us to leave only after they killed a few villagers.”

Omar Abedelal is currently living in Gaza City and has recently recovered from COVID19. He still has hope of returning to Burayr.

“I was about 9 years old, but if we had had enough guns, I would have fought. Unfortunately, we were overcome and forced to leave our homes,” he pauses, “None thought we would never return back in days or weeks. We were made to believe the Arab armies would come and help liberate Palestine. They never came and we never returned.”

VIDEO: “The sky was our blanket and the ground was our mattress”: Nakba Survivors Speak

On his part, Hajj Mansi Nassar, 80, tells similar stories of horror and massacres, but also talks of the valiant Palestinian villagers who defended their villages with the few guns they had.

“I remember each inch in my village Beit Darras,” says Mansi Nassar who was 7 years when the armed Jewish militias besieged Beit Darras.

The suffocating siege and the Palestinian resistance in Beit Darras is something all his extended families knows by heart.

“The Zionists surrounded the Beit Darras, and we refused to surrender,” he narrates, “Each time they attacked, the young men armed only with rifles pushed them back. Three times we foiled their attempt to enter and killed many of the invading militia members. And many Palestinians fell martyrs. Then, they started firing shells wantonly burning the fields and destroying the homes. Like what happened in many Palestinian villages, after the destruction, the Jewish attackers executed some young men,” he continued clearly shaken retelling us the details of the forced expulsion.

Mansi Nassar’s father, Mohammed, was killed by the armed Zionists. In addition, Israel assassinated two of his sons, Emad and Akram, 40 and 60 years later in Gaza.

Historians talk about at least two dozen massacres committed by Zionist and later Israeli occupation forces, “which played a crucial role in spurring the mass flight of Palestinians from their homes.”

Mansi Nassar’s father, Mohammed, was killed by the armed Zionists. Israel assassinated two of his sons, Emad and Akram, 40 and 60 years later in Gaza.

For example, members of the Irgun and Stern Gang, that later became the Israeli occupation army, massacred about “100 Palestinian civilians, including women and children” in the town of Deir Yassin on April 9, 1948. Menachem Begin and Yitzhak Shamir, the leaders of these gangs, later were rewarded as they became Israeli prime ministers.

As this feature is being written, Israel is invading Al-Aqsa Mosque and beating and shooting Muslim worshippers.

Israel is ethnically cleansing Sheikh Jarrah, a neighborhood in occupied Jerusalem, and Jewish mobs in occupied Haifa, Lydda, and Akka and other cities occupied in 1948 are wreaking havoc, lynching Palestinians and damaging or attacking, torching mosques, homes, and businesses.

Meanwhile, in Gaza, Israel has waged a barbaric war against the Palestinians of Gaza with Israeli forces carrying out hundreds of air strikes in the span of six days. They massacred over 145 Palestinians including 41 children, 23 women, and 1100 were injured. Hundreds of homes are either damaged or destroyed.

So, yes, the Nakba in occupied Palestine continues because it has never ended.

“The anti-Palestinian bigotry and hate and massacres we witnessed 73 ago at the hands of the Jewish militias have simply been repeated by Israeli occupation forces,” Omar Abedelal insists. “The Nakba never ended.”

Omar Abedelal and Mansi Nassar both spend their time around their grandchildren telling them stories about “the good old days”, because, to them, memory is an important weapon.

In his diaries, Ben-Gurion summarized the Zionist policy that led to the expulsion of Palestinians and destruction of Palestine. He wrote: “We need to pester and motivate the [Palestinian] refugees to move.” But over seven decades, the old have been passing their tales, resilience, and steadfastness to the young. And the young are more determined than ever to return to their rightful land and to resist Israeli ethnic cleansing policies until they are free.

“Everyday brings us closer to the sacred Right of Return and closer to Palestine,” ends Omar Abedelal.

Refaat Alareer is an academic in Gaza, Palestine, and the editor of “Gaza Writes Back”. His Twitter is @itranslate123

Talal El-Nabih is a Gaza-based journalist.