While offering the world’s most miserable detention conditions, Guantánamo also offers career opportunities, high military perks and honors, and a seemingly endless budget for a small army to guard. 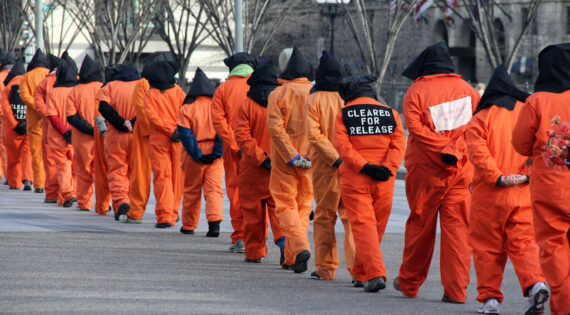 Protesters wearing orange jumpsuits and bags over their heads rally outside of the White House to protest Guantanamo Bay on the 13th anniversary of the first prisoners arriving at the detention facility, in Washington, DC on January 11, 2015. Photo by Erkan Avci, Anadolu Images

That’s certainly our goal and our intention.” This was the non-committal answer given by White House Press Secretary, Jen Psaki, when, on February 12, she was asked by a reporter whether the new Joe Biden Administration intends to shut down the notorious Guantánamo Bay Prison by the end of the president’s first term in office.

Psaki’s answer may have seemed reassuring, that the untold suffering experienced by hundreds of men in this American gulag – many of whom were surely innocent – would be finally coming to an end. However, considering the history of Guantánamo and the trail of broken promises by the Barack Obama Administration, the new administration’s pledge is hardly encouraging.

Compare the new language with that of Obama’s impassioned diatribes about humanity, justice and American values, which he utilized whenever he spoke of Guantánamo. “Gitmo has become a symbol around the world for an America that flouts the rule of law,” Obama said at a speech at the National Defense University in May 2013.

Enamored with his every word, Obama’s audience clapped with enthusiasm. When he delivered that particular speech, Obama was then serving his second term in office. He already had ample opportunity to shut down the prison which operated with no international monitoring and entirely outside the realms of international and US laws.

Obama is likely to be remembered for his words, not his actions. Not only did he fail to shut down the prison which was erected by his predecessor, George W. Bush, in 2002, but the Guantánamo industry continued to thrive during his terms.

For example, in his speech, Obama made reference to the high cost of “a hundred and fifty million dollars each year to imprison 166 people.” According to the New Yorker, reporting in 2016, Guantánamo’s budget had morphed to “$445 million last year,” when Obama was still in office.

Yet, as the budget grew by leaps and bounds, the number of Guantánamo prisoners dwindled. Currently, there are only 40 prisoners still residing in that massive edifice of metal, concrete and barbed wire located at the eastern tip of Cuba, built atop a piece of land ‘leased’ by the US in 1903.

According to the New Yorker, reporting in 2016, Guantánamo’s budget had morphed to “$445 million last year,” when Obama was still in office.

It is easy to conclude that the US government keeps the prison open only to avoid international accountability and, arguably, to extract information by torture, an act that is inconsistent with American laws. But this cannot be it. On the one hand, the entire wars against Afghanistan and Iraq were illegal under international law.

Such a fact hardly stopped the US and its allies from savagely invading, humiliating and torturing entire populations with no regard whatsoever to legal or moral arguments.

On the other hand, Guantánamo is merely one of many American-run prisons and detention centers throughout the world that operate with no manual of rules and according to the most ruthless tactics. The tragedy of Abu Ghraib, a US military detention center in Baghdad, only became famous when direct evidence of the degrading, and incredibly violent conduct that was taking place within its walls was produced and publicized.

Guantanoma Prison and the CIA'S (US Central Intelligence Agency) tortures were protested in Washington on the anniversary of the opening of Guantanamo Prison. Photo by Samuel Corum, Anadolu Images

In fact, many American officials and members of Congress at the time used the Abu Ghraib scandal in 2004 as an opportunity to whitewash and rebrand American crimes elsewhere and to present the misconduct in this Iraqi prison as if an isolated incident involving “a few bad apples”.

The ‘few bad apples’ argument, made by G. W. Bush was, more or less, the same logic utilized by Obama when he championed the closure of Guantánamo. Indeed, both Presidents insisted that neither Abu Ghraib nor Guantánamo should be made out to represent what America is really all about.

“Is this who we are?” Obama animatedly and passionately asked, as he made a case in favor of the closure of Guantánamo, speaking as if a human rights advocate, not a Commander-in-Chief who had direct authority to shut down the entire facility. The truth is that the Abu Ghraib tortures were not ‘a few bad apples’ and Guantánamo is, indeed, a microcosm of exactly what the US is, or has become.

The truth is that the Abu Ghraib tortures were not “a few bad apples.” Guantánamo is a microcosm of exactly what the US is or has become.

From Bagram, Afghanistan, to Abu Ghraib, Iraq, to Guantánamo Bay, Cuba, to the many ‘floating prisons’ –  news of which was leaked by US media in 2014 – the US government continues to make a mockery of international and humanitarian laws. Many American officials, who genuinely advocate the closure of Guantánamo, refuse to acknowledge that the prison is a symbol of their country’s intransigence and refuse to accept that, like any other country in the world, it is accountable to international law.

This lack of accountability has exceeded the US government’s insistence to ‘act alone’, as in to launch wars without international mandates. One US Administration after another has also made it clear that, under no circumstances, would they allow accused war criminals to be investigated, let alone stand trial, before the International Criminal Court (ICC). The message here is that even America’s ‘bad apples’ can potentially walk free, regardless of the heinousness of their crimes.

Just months after the Trump Administration imposed sanctions on ICC judges to punish them for the potential investigations of US crimes in Afghanistan, it freed the convicted criminals who carried out horrific crimes in Iraq. On December 22, Trump pardoned four American mercenaries who belonged to the private military firm, Blackwater. These convicted murderers were involved in the killing of 14 civilians, including two children, in Baghdad in 2007.

What became known as the ‘Nisour Square massacre’ was another example of whitewashing, as government officials and mainstream media, though expressing outrage at the unlawful killing, insisted that the massacre was an isolated episode. The fact that hundreds of thousands of Iraqis, mostly civilians, were killed as a result of the American invasion seems irrelevant in the country’s skewed logic in its never-ending ‘war on terror’.

Whether Biden fulfills his promise of shutting down Guantánamo or not, little will change if the US remains committed to its condescending attitude towards international law and to its undeserved view of itself as a country that exists above the universal rights of everyone else.

That said, Guantánamo, on its own, is a crime against humanity and there can never be any justification to rationalize why hundreds of people are held indefinitely, without trial, without due process, without international observers and without ever seeing their families and loved ones. The explanation often offered by the pro-Guantánamo pundits is that the prison inmates are dangerous men. If that was, indeed, the case, why were these supposed criminals not allowed to see their day in court?

According to a report by Amnesty International published in May 2020, of the 779 men who were taken to that facility, “only seven have been convicted.” Worse, five of them were convicted “as a result of pre-trial agreements under which they pleaded guilty, in return for the possibility of release from the base.” According to the rights group, such a trial by ‘military commission’ “did not meet fair trial standards”.

Read: Who is Responsible for Ending the American Dream, Only Trump?

In other words, Guantánamo is – and has always been – a fraudulent operation with no real inclination to holding criminals and terrorists accountable and to preventing further crimes. Instead, Guantánamo is an industry, and a lucrative one. In many ways, it is similar to the American prison military complex, ironically dubbed the ‘criminal justice system.’  Referring to the unjust ‘justice system’, Human Rights Watch derided the US for having “the largest reported prison population in the world”.

“The (US) criminal justice system – from policing and prosecution, through to punishment – is plagued with injustices like racial disparities, excessively harsh sentencing and drug and immigration policies that improperly emphasize criminalization,” HRW stated on its website.

The above, too, can be considered an answer to Obama’s rhetorical question, “Is this who we are?”. Yes, Mr. Obama, in fact, this is precisely who you are.

While offering the world’s most miserable detention conditions to hundreds of potentially innocent men, Guantánamo also offers career opportunities, high military perks and honors, and a seemingly endless budget for a small army to guard only a few shackled, gaunt-looking men in a far-away land.

So, even if Biden is able to overcome pressure from the military, from the CIA and from Congress to shut Guantánamo down, justice will still be absent, not only because of the numerous lives that are forever shattered but because America still refuses to learn from its mistakes.