The Atlas of Islamic Thought

After three years of intensive work, the Atlas of Islamic Thought project, has finally come to an end. This project is the result of collective work, with the contribution of over 200 people, most of them are scholars from different fields. The project endeavors to revitalize the lost tradition with an emphasis on historical continuity in the Islamic scientific tradition. 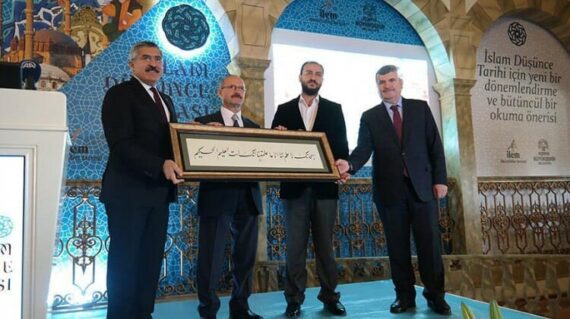 After three years of intensive work, the Atlas of Islamic Thought project, has finally come to an end. This project is the result of collective work, with the contribution of over 200 people, most of them are scholars from different fields. The project endeavors to revitalize the lost tradition with an emphasis on historical continuity in the Islamic scientific tradition. The Atlas of Islamic Thought project was initiated by the Scientific Studies Association (ILEM) and was entirely funded by the Konya Metropolitan Municipality. The outputs of the project include a web page (https://www.islamdusunceatlasi.org/) and a three-volume encyclopedia.

Suleyman Guder, the general coordinator of ILEM, underlined two chief purposes of the project. The first was to bring back the centuries old wisdom in Islamic thought into today’s scholarship and to provide a map for those who search for the traces of Islamic tradition.

Project coordinator Ibrahim Halil Ucer noted the particularistic view of today’s scholarship. Ucer gave the example of a house and stated: “We are trying to imagine a window without having any idea about the house. I hope that lost pieces of our memory be restored with this project.” Mentioning self-colonization that drew prominent figures of the Islamic tradition out of the scene, Ucer underlined that an important objective of the project is periodization. More precisely, Ucer criticized the eight-century gap in literature from the 13th century onwards, which scholars did not fill.

Professor Ihsan Fazlioglu, a consultant of the project, repeating a favorite motto of his own, said that “those who lack a sense of belonging can’t truly feel responsibility.” For him, the issue is not just getting to know something, but is a matter of culture; the value of knowledge can be measured according to its influence in social life and morals. Fazlioglu underlined that the major contribution of this project is cultural unity and values that keep all details and particularities in a consistent whole.

The effects of Islamic thought are widespread

Being the former general coordinator of ILEM and a consultant of the project, and now currently the coordinator of ILKE, Lutfi Sunar stated his ideas about the Atlas of Islamic Thought project and why he believed it was important in the following way: “In general, AIT has been an important resource in terms of dealing with an entire history, and in particular the history of thought. As ILEM we pay close attention and importance to the preservation of our Islamic heritage. This is the underlying foundation of our establishment. We believe that the accumulation of Islamic thought has not come to an end, but on the contrary that, it is still an effective way to find solutions to the problems of the world. In actual fact, the Atlas of Islamic Thought was a project in which we believed would crown the intense fifteen years of work we conducted.

At first this was only a website project. However, we expanded this along the way and came to a conclusion that publishing a book would be an easier alternative for our audience. When we decided on a book, we decided on a historical chronology. This is because it is not enough to publish this inter-related material online in a scattered manner. When transformed into a book however, it ought to be a carrier of its backbone. While this caused the prolongation of the project, it certainly made it more qualified.

Due to this project, we came to realize the interaction between the geographies and basins of Islamic thought, which we would have never heard about. We knew that Islamic thought influenced the West in the Middle Ages, and with this project, more tangible evidences about this subject emerged on the surface. Another important aspect this project made us realize is that Islamic thought seriously interferes with all memories and traditions of thought, and that it is not only a thought developed by its internal logic frameworks, but that it is a connecting force between the east and west, north and south.

This project also unfolded the fact that Islamic thought is not only a Muslim thought, but that it is the common value of all mankind, which reflects its collective accumulation.”

Also Read
How to Make an Ottoman Clock in the Twenty First Century, An Interview With Professor Lutfi Sunar