The CHP’s Confusion Regarding the Presidential Election

While all major Turkish political parties nominated their de jure or de facto party leader as their presidential candidate, the CHP preferred a strange move that does not aim to win the elections but rather to guarantee Kilicdaroglu’s political future. 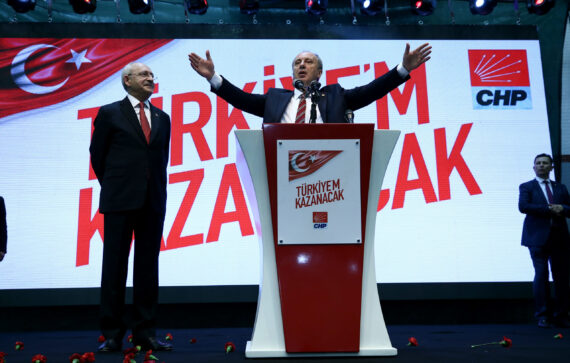 Yalova Deputy of the Republican People's Party (CHP) Muharrem Ince (C) makes a speech as he is flanked by Chairman of the CHP, Kemal Kilicdaroglu (L), after the announcement of Ince's presidential candidacy from the CHP in Ankara, Turkey, May 4, 2018. Anadolu Agency

Even though CHP’s MP Muharrem Ince challenged the CHP’s incumbent chairman Kemal Kilicdaroglu, who lost eight elections in eight years, twice, he has been nominated as the party’s presidential candidate. Interestingly, Ince had stated during the last party congress in February that, “the CHP’s chairman is the party’s natural presidential candidate… If you want to rule the party while someone should rule the country, then, why are you the chairman?”

Nevertheless, it seems that in contrast to other opposition party leaders, the CHP chairman did not dare to compete as a candidate against the AK Party’s candidate, President Recep Tayyip Erdogan. While all major Turkish political parties nominated their de jure or de facto party leader as their presidential candidate, the CHP preferred a strange move that does not aim to win the elections but rather to guarantee Kilicdaroglu’s political future. It’s likely that the CHP leader does not want to risk his position as both a future MP in the new assembly and party chairman. Kilicdaroglu’s move to nominate Ince may though hamper his future ambitions. As Burhanettin Duran stressed, independent from the election results, Ince may cause serious troubles for Kilicdaroglu. Actually, it’s very unlikely – but – if Ince gains any success as a presidential candidate, he will directly try to control his party by challenging Kilicdaroglu’s one-man party leadership.

Besides these political anomalies among the left-nationalist secularists of Turkey, one statement by Ince during his speech at his nomination ceremony was striking. Ince said he would not only represent the CHP’s supporters but all of Turkey’s 80 million citizens. By this, Ince removed his CHP lapel pin to put on a Turkish flag pin as a symbol for neutrality by stating, “We will be impartial/unbiased. We will be independent.” On the other hand, he called his party supporters by saying, “This time we want the ruling power!” Consequently, all the CHP supporters echoed in the hall “power, power, power…”

First of all, it’s quite absurd to have the ambition to win the executive presidency in a presidential system by stressing the party as “we want…” while on the other hand promising to be unbiased or impartial. Thus, the question arises as to how an unbiased president will appoint his ministers? Or even more concrete, how does a Kemalist MP since 2002 plan to rule the country without preferring his party fellows in the next five years and who will believe in these dubious statements?

As I already addressed above, the CHP has to decide what the party actually wants to achieve. Either winning the presidential elections –and the parliamentary majority– to govern the country under the new system by offering Turkish citizens a certain program, or, trying to bring back the old system in which previous presidents also used alleged “impartial” discourses, but preferred strong pro-tutelage positions. Nevertheless, at the end of the day, Ince may challenge the incumbent CHP leader Kilicdaroglu due to his –rather unlikely– limited success during the presidential election. This would be a miscalculation by Kilicdaroglu who wants to get rid of Ince by nominating him as the party’s presidential candidate. On the other hand, in the case of a rather obvious unsuccessful experience for Ince, that is to say, if the CHP loses the presidential race, Kilicdaroglu will most probably still stay in the new parliament as the party’s leader while Ince will quit his political career. The next month and a half will show us more.