If the NEP is implemented properly, it will not be a surprise for Turkey to regain macroeconomic stability and to grow again at a level close to its long-run potential 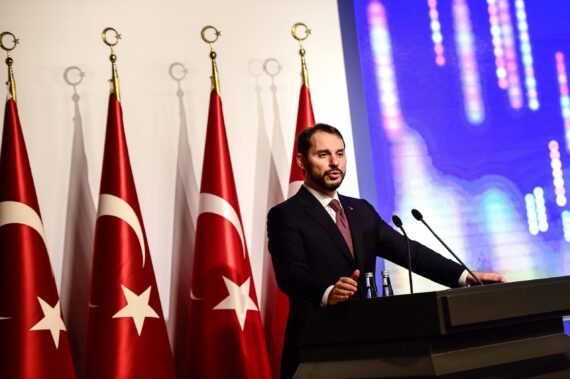 Turkish Treasury and Finance Minister Berat Albayrak speaks during a presentation to announce his economic policy in Istanbul, on August 10, 2018. Getty Images

Turkey is tackling an economic turbulence driven mainly by massive speculative attacks on its currency (Turkish Lira). With all their efforts, the economic management team has been taking necessary steps to rebalance the Turkish economy. Two weeks ago the Central Bank of the Republic of Turkey (CBRT) raised the policy interest rate by 625 basis points, surprising financial markets that expected around a 400 basis points hike. The CBRT sent a strong signal that it will maintain a tight stance in monetary policy, ending futile discussions about central bank independence.

After this monetary policy decision, all economic agents held their breath on hearing about the path of fiscal policy that the government will follow in the medium term. The New Economic Program (NEP), which includes macroeconomic targets and fiscal policies to be implemented for the 2019-2021 period, was announced by the Minister of Treasury and Finance Berat Albayrak last Thursday. The initial reactions from the business sector and financial markets for the announced plan are positive, emphasizing that the NEP provides a consistent, realistic and remedial road map for the medium term.

The NEP clearly shows that the first priority of the government in the medium term is to re-balance the economy by slowing down inflation and the current account deficit. To achieve this, the government is determined to implement a more stringent fiscal policy than in the past years. Fiscal policy will be more coordinated with monetary policy over the next three years.

The government decided to reduce some public expenditure items, which are waste and not indispensable, and to collect more revenues from specific areas. These steps are expected to save 76 billion lira (around 12 billion dollars) in public finance. Expenditures on official cars, housing and social facilities will be cut down. Due to drying global liquidity conditions and high interest rates, investment projects for which tender processes have not been started or for which tender processes have been started but not finalized are planned to be suspended. The government targets to improve the tax collection process and widen the tax base.

All these policy actions will help reduce inflation and the current deficit to a certain extent. However, they will not be enough without more structural steps. So, the government needs to also focus on producing more structural solutions to problems. For example, as part of the comprehensive anti-inflationary program, the Product Monitoring Mechanism, in which price fluctuations in food products will be closely monitored by using big data and advanced analytical methods, will be implemented. To deal with the current account deficit in a sustainable way, industrial policies will become more selective, giving more weight to promising sectors, such as pharmaceuticals, petrochemicals, energy, machinery-equipment and software, in channeling public incentives.

By doing so, Turkey can increase value-added and productivity growth, reduce its dependency on imported high-tech intermediate goods and services, and increase its share of high-technology exports. This will help Turkey not only to keep its current account deficit under control, but also increase long-term economic growth.

Unfortunately, tight policies aimed at bringing the economy into a stable path again have some side effects. According to the NEP, Turkey will be highly likely to experience modest economic growth figures below its real potential and high unemployment rates. Weak domestic demand and investment conditions, caused by high interest rates, deterioration in expectations and the depreciation of the Turkish Lira, will cool down economic growth, and in turn increase unemployment rates.

It is important to note that switching to a tight fiscal stance does not mean that the public sector will be out of the economic equation. Turkey does not need to implement strict austerity measures, as the Southern European countries did during the global financial crisis. It needs to reduce redundant government expenditures and wipe out non-effective tax exceptions and other incentives. Thanks to its low level of public debt, the government has fiscal space to provide financial help to firms and industries that are productive and key for the future of the Turkish economy, while maintaining fiscal disciple (not allowing the public deficit-to-GDP ratio rise above 2 percent). For example, in his presentation, Albayrak clearly indicated that if needed, a comprehensive plan will be introduced to strengthen the capital structure of the banking system further and to provide external finance to the real economy at affordable rates. The Development Bank for Turkey will be restructured to offer new external financing opportunities to promising firms and sectors.

Yes, it is important to reveal such a program to improve perceptions regarding the stability and rationality of economic governance, but it is much more crucial to show the implementation of the program. The eyes of all economic agents will be on the implementation of this program. The progress made under this plan will be monitored in 3-month periods by the Public Finance Transformation and Change Office, a new governance establishment for budget discipline. If the NEP is implemented properly, it will not be a surprise for Turkey to regain macroeconomic stability and to grow again at a level close to its long-run potential.