Everything that is happening in Yerevan nowadays has the signs of a military coup, but in fact it is not. 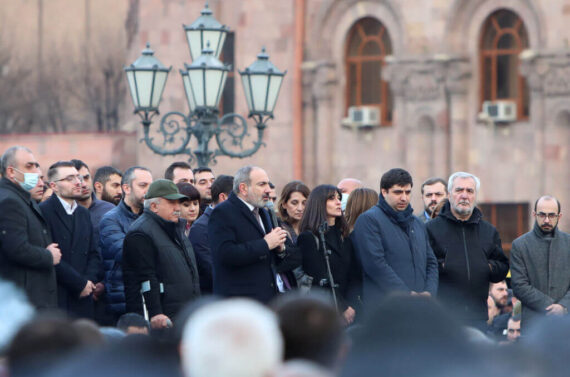 Armenia's President Nikol Pashinyan is seen during a rally of his supporters at Republic Square in central Yerevan on November 9, 2020. Photo by Hayk Baghdasaryan, TASS via Getty Images

Everything that is happening in Yerevan nowadays has the signs of a military coup, but in fact it is not. Personally, I perceive the statement of Chief of the General Staff of the Armenian Armed Forces, Colonel General Onik Gasparyan, demanding that Prime Minister Nikol Pashinyan resign as the military’s intervention in politics and a political démarche, but not as a military takeover or even the sign of a readiness to take full responsibility for the situation in the country.

If this general really wanted to remove Pashinyan from power, he would not have come out with incomprehensible statements, but rather would have gathered three or four dozen decisive officers around him, blocked the prime minister’s motorcade somewhere, disarmed or shot his guards, and took Pashinyan himself a hostage, forcing him to sign documents on the transfer of power, thereby giving such a step the legality of the transfer of power.

Currently, in Yerevan there are no signs of a military coup: the soldiers are in barracks, and the buildings of the parliament, the government, the national television, together with the state bank and other financial institutions of the country have not been taken under the control of the army. The Internet is not turned off nor are the airports closed.

The call of the Chief of the General Staff of Armenian Armed Forces for Pashinyan to resign only provoked a new round of confrontation between civilian supporters and opponents of the Armenian prime minister, while the army itself remained on the sidelines.

It became obvious that the Armenian military is not ready or is unable to end the chaos in the country, which they themselves have helped create in the first place. Perhaps for this reason, military commanders decided to play politics today so as not to lose their posts tomorrow.

Here it would be appropriate to recall the New Year’s address of Prime Minister Pashinyan to his compatriots, in which he stated that his main domestic political goal was to change the elites, while he did not specify which particular elites he was going to lustrate and ostracize. The high command of the armed forces of Armenia, with its extremely low level of professionalism, undoubtedly became one of the main reasons for the defeat in the war with Azerbaijan last autumn, after which all of the generals of the Armenian army should have been dismissed.

In recent months, Armenian Prime Minister Pashinyan has been holding back from taking the decision to dismiss the defeated generals only due to the lack of worthy candidates to replace them. They, in turn, also perfectly understood that their time in high positions is rapidly coming to an end, and therefore decided to participate in the removal of the head of state from power – before he does so to them.

The generals of the Armenian army made their career during the rule of the so-called Karabakh clan in the country.

The generals of the Armenian army made their career during the rule of the so-called Karabakh clan in the country – a junta of field commanders of the illegal armed formations of the Armenian separatists of Nagorno-Karabakh during the war between Armenia and Azerbaijan in 1990-1994 which includes former presidents of Armenia Robert Kocharyan and Serzh Sargsyan. As we know, the “Karabakh clan” was expelled from power in Armenia as a result of the peaceful people’s revolution in the spring of 2018, after which the current head of Armenia, Nikol Pashiyan, came to power.

Since then, the confrontation between Pashiyan and his entourage, on the one side, and the representatives of the “Karabakh clan” of Kocharyan and Sargsyan, on the other, has not stopped. Many of the generals who demanded Pashinyan’s resignation were and continue to be closely associated with the “Karabakh clan.” Many of them have gone through all the stages of their military career in the occupation corps of the Armenian armed forces, known as the “Artsakh Defense Army,” in the previously occupied Azerbaijani lands. The Artsakh Defense Army was integrated into the structure of the Armenian army.

The elimination of the “Karabakh clan” and the oligarchs affiliated with it from Armenia’s political, economic, and financial life is Pashinyan’s most urgent task. Therefore, the dismissal of a significant number of current generals, disgraced by the defeat from the Azerbaijani army, from the state administration is a strong blow by Pashinyan against his main political opponents – Kocharyan and Sargsyan – who aim to strengthen their power in the country.

During the years when the “Karabakh clan” was in power in Armenia (2000-2018), the de facto rulers subordinated the entire country’s life to the interests and needs of the Armenian population of Karabakh, whose actual masters were the native Kocharyan and Sargsyan.

During the years of their presidency, Armenia was turned into an appendage of Karabakh, giving its human, material, and financial resources for its comfortable life. In those years, the relationship between Karabakh and Armenia was very similar to the relationship between the metropolis and the colony in ancient times: the inhabitants of Karabakh automatically had Armenian citizenship and could participate in the political life of Armenia, holding high state positions in it, while the citizens of Armenia were not citizens of Karabakh, and political rights in Karabakh were limited to its population.

Pashinyan deliberately provoked, started, and lost the war for Karabakh to Azerbaijan to deprive the “Karabakh clan” of its ideological and economic foundation.

Pashinyan came to power in Armenia in May 2018 following a wave of popular support for his slogan to liberate Armenia from the dominance of the natives of Karabakh in all spheres of life, and the corruption they generated in all walks of life and power. Over the past three years, the confrontation between Pashinyan and the “Karabakh clan” has not stopped, and in order to weaken his presence and influence in the country, Pashinyan seems to be ready to take the most extreme measures, including an open conflict with the army establishment, which we are all witnessing today.

Recently, I have become more and more convinced of the opinion that last fall, Pashinyan absolutely and deliberately provoked, started, and lost the war for Karabakh to Azerbaijan in order to deprive the “Karabakh clan” of its ideological and economic foundation. The reality of this opinion is supported by a number of facts, the reliability of which is beyond doubt. So, already on the fourth or fifth day of the war, after the Azerbaijani army destroyed all Armenian air defense systems in Karabakh, the rebellious Chief of General Staff Onik Gasparyan warned Pashinyan about the imminent and inevitable defeat of the army. Pashinyan, however, turned a deaf ear to these warnings and ordered the continuation of fighting.

When on October 10, 2020, on the initiative and under the diplomatic pressure of Moscow, a humanitarian truce was declared to put an end to the catastrophic situation of the Armenian army at the frontline, Pashinyan broke the ceasefire by ordering the army to launch a missile strike on civilian targets in the Azerbaijani cities of Ganja and Barda. On October 14, 2020, the ex-Minister of Defense of Armenia David Tononyan also urged him to stop hostilities and start negotiations with Azerbaijan, but Pashinyan refused to take this step for another month, and only at the end of the first half of November, did he ask for peace on surrender terms.

But by this time, all the tactical formations of the occupation corps of the Armenian troops in Karabakh, or the “Artsakh Defense Army,” were physically destroyed or defeated at the battlefield – with the exception of one battalion in the Kelbajar region, which did not participate in battles. In other words, the “Karabakh clan” had lost its military and political support.

Pashinyan, by acting this way, clearly remembered that in the spring of 2018, when he came to power in Armenia, the then Head of State Sargsyan summoned army units from Karabakh to suppress popular protests and defend his regime, but what they did instead was to support the side of the protesters.

To avoid a repetition of such a scenario and deprive the “Karabakh clan” of their influence in the army, Pashinyan decided not to disband them, but to exterminate them in the war, thereby driving a wedge between Armenia and Karabakh to the extent of transferring the territory back to the jurisdiction of Azerbaijan. After all, it was not out of the blue that former Armenian President Robert Kocharyan said in his statement upon his return to politics that his return was not motivated by the “anti-Armenian” or “anti-national” sentiments of Pashinyan, but because of his “anti-Karabakh” actions. 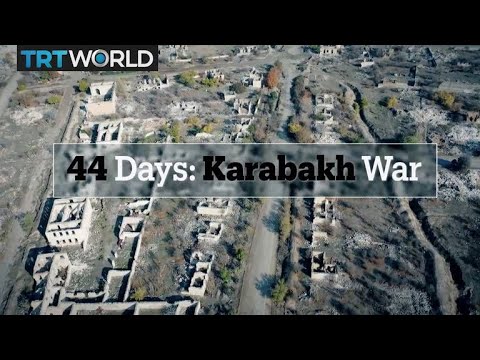 The sequence and totality of these actions have their own logic, which should be understood and taken into account when predicting or forming scenarios for the course of events in the South Caucasus region, and especially in its neighboring countries – primarily Russia and Turkey- in the near and middle term.

First, Pashinyan provokes a war with Azerbaijan, surrenders Karabakh and all other previously occupied territories to it, then returns all Karabakh Armenians to Khankendi under the protection of Russian peacekeepers, thereby depriving the “Karabakh clan” of its material and social base. What will be his next step? It seems to me that after the reprisal (not physical, but metaphorical) of the opposition generals, the final outcome of which we will see within the next months, Pashinyan will begin to expropriate the assets of the leaders of the “Karabakh clan” and local oligarchs associated with them inside the country.

For the process of annihilation of the old army elites to take place as invisibly as possible in front of the international community and, most importantly, the Armenian diaspora, especially the Russian one, Pashinyan may completely abandon Karabakh and its population, leaving Russia, Azerbaijan, and Turkey on their own in Karabakh.

Perhaps such a prospect might seem to many as a fantasy or even a phantasmagoria, but one should be ready for all scenarios.

Oleg Kuznetsov is a professor at the Azerbaijan University of Languages. Since 2012, he provides consulting services to foreign legal entities in Russia on labor, migration, customs legislation, and deals with private legal practice. He is the author of more than 170 scientific and educational works and publications.