The Defender of Democracy: The Turkish People

“Do not watch superhero movies, just look at one another’s face.” These words, uttered by a university student who took to the streets like hundreds of thousands of people all over Turkey in an effort to thwart the coup attempt, reflect an apparent reality. 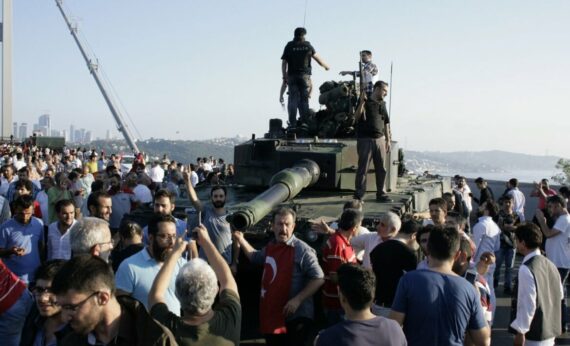 “Do not watch superhero movies, just look at one another’s face.” These words, uttered by a university student who took to the streets like hundreds of thousands of people all over Turkey in an effort to thwart the coup attempt, reflect an apparent reality. June 15 will certainly be remembered as a watershed day, not only for Turkey but also for the whole region, if not the whole world, for the coming decades. On that night, a secret faction of the Fetullah Gülen Terror Organization (FETO) in the Turkish military attempted a coup, and this attempt crumbled at the hands of the Turkish people, who rushed the streets en masse in order to quell the coup attempt.

NewsBy Büşra Toprak
That night saw how people with bare hands could stand tall against the putschists who had guns, tanks and jets, along with ruthlessness. On that night, over one hundred Turkish people were murdered as the putschists opened fire on them with guns paid for by the people of Turkey. In the following days, the Turkish people increasingly took to the streets in their millions all over Turkey to defend their country and democracy, literally from dusk to dawn. In the end, the coup attempt was mostly quelled at the expense of over two hundred people, who were martyred.The Turkish people have grown substantially richer and democracy has taken root as a much more citizen-friendly environment has emerged in Turkey in the AK Party (Justice and Development Party) period. Make no mistake: while the AK Party faced coup attempts and enormous obstacles, and even fought for its existence in a judiciary battle in 2009, it has almost always tried to foster democracy in Turkey. Hence, it is no surprise that the AK Party is very popular in Turkey, with apparently no matching predecessor in its almost one-hundred-year history.Prior to 2012, Western leaders and media outlets praised the AK Party government for its accomplishments both economically and politically, and Turkey was hailed as the poster boy of democracy. However, from 2012, the same Western leaders and media outlets started to criticise the AK Party government, and particularly its leader Recep Tayyip Erdoğan, for growing increasingly authoritarian; however these claims failed to be substantiated. This situation made everybody wonder whether these accusations were simply employed as a pretext to discredit the AK Party and Erdoğan. At the same time, political turmoil in Turkey began to escalate relentlessly. First came the Gezi Park protests in 2013 by numerous illegal factions, as well as young people, from relatively wealthy Kemalist families, who had traditionally opposed the AK Party government and Erdoğan.After the failure of the Gezi Park protests, the second attack came on December 17-25, 2013, this time with the joint efforts of the FETO factions in the judiciary and police forces. The FETO apparently attacked the government and Erdoğan with never-proven and finally aborted judicial claims. The FETO members, who had infiltrated the Turkish police forces, even tried to detain Erdoğan and his son. The AK Party and Erdoğan survived this attack too.

In the following year, Erdoğan gained a political victory in the presidential election with 52 percent of the total votes, and became the first president of the Republic of Turkey to be directly elected by the constituents. However, the clouds above Turkey only darkened as the third attack came from another terrorist organisation, the PKK, apparently with the sole aim of toppling the president Erdoğan and the AK Party government. The PKK escalated violence relentlessly as it targeted military and police stations, as well as killing several hundreds of soldiers and–mostly Kurdish–civilians, since 2014. However, the PKK has paid a very heavy price as over 7,000 PKK terrorists have been neutralised by the Turkish military in the last year.

Then came the final attack. This was the biggest, such that it could not be compared to the previous attacks: a military coup attempt by the covert faction of the FETO in the military. The leader of the FETO is a cleric named Fetullah Gulen, who has been living in the US since 1999 in a massive manor very well protected by armed guards. From at least the 1970s, the FETO has tried to infiltrate every governmental body from universities to judiciary and military forces, with a special focus on key institutions and departments. It did everything to capture positions and titles in various governmental organisations, while disguising itself like a chameleon, as some of its member had lived unacceptable lives from the standpoint of Islam for decades, even though they were in fact adherents of a seemingly very conservative religious organisation.

The FETO ran smear campaigns against people in order to strip them of their titles and positions, only for those positions to be filled by FETO members. People were even murdered with the help of the FETO faction in the police force, and these empty chairs were taken by FETO members. In addition, the FETO had had a self-declared, but fake, charity network in order to raise money to run the organisation financially. It is estimated that the FETO had been commanding over 20 billion dollars. For decades, it raised money from its members as well as business persons from different walks of life by threatening them outright with imprisonment or death. No one knows how many people have been murdered or imprisoned by the FETO, though a conservative guess would be in the thousands, if not more.

All of this happened under the guise of a spiritual organisation, which is why the FETO was to hide itself for so long, until it tried to topple Erdoğan and the AK Party government. The FETO has only recently been accepted formally as a terror organisation by Turkey as its true face, which certainly amounts to nothing less than a terror organisation, has begun to surface. Although Turkey has suffered several coup attempts in the last 70 years, in none of them had congress buildings been bombed by jets or had people been opened fire upon and murdered. Now, the Turkish people intensely abhor Gulenist people and Gulen himself, the man behind the FETO and who continues to reside in the US under the protection of armed guards. The democracy in Turkey has definitely been damaged by this failed coup attempt, but its prospect is certainly much brighter in the hands of the Turkish people, who defended it at the expense of their lives.