The End of Civil Society in Egypt: Authoritarianism Triumphs

It’s clear that the current regime in Egypt – far from any form of democratization – dragged the country into a more totalitarian rule. 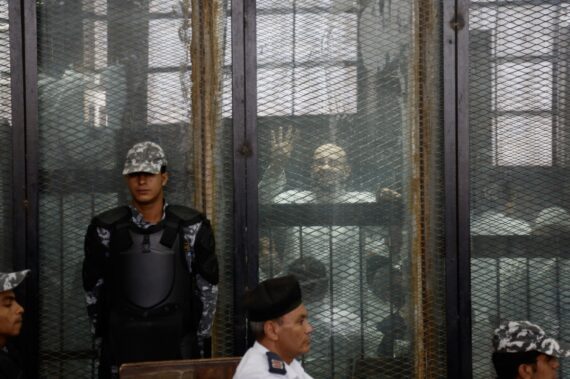 Judgment session in the case known as the case of the protests of Rabaa al-Adawiya, Cairo Criminal Court in Cairo, Egypt on 8 September 2018. (Photo by Islam Safwat/NurPhoto via Getty Images)

Following the military coup in 2013, the new regime in Egypt has taken serious steps to limit the activities of civil society. The regime led by Abdel Fattah Al-Sisi took the initial attack on the Muslim Brotherhood movement, the largest non-governmental organization in the country. During 2013 and 2014, the Sisi regime targeted NGOs, health institutions, religious and educational centers, which were claimed to be associated with the Muslim Brotherhood. The number of organizations that were closed in the post-coup period reached to over 10 thousand at the best estimate.

Non-governmental organizations and activists with secular and liberal ideology such as the 6 April Movement, Revolutionary Socialists, the Kefaya movement, and even the Tamarod movement became the targets of the Sisi regime.

On the other hand, non-governmental organizations and activists with secular and liberal ideology were also the targets of the Sisi regime. The 6 April Movement, Revolutionary Socialists, and the Kefaya movement as well as members of these organizations were subject to pressure from the regime and some were arrested for long prison terms. Even the Tamarod movement, which supported Sisi during the coup, failed to receive support from the post-coup regime that has been in place since July 2013.

In 2017, the Sisi regime took a step to institutionalize pressure on civil society with a new law that re-arranged the activities of civil society organizations. However, rather than liberalizing the functioning of civil society, the law further restricted their activities. The law made it difficult for 47,000 NGOs in the country to carry out their activities. In addition, the law stipulated that foreign NGOs need to pay $16,500 in order to start their operations in Egypt – a requirement that attracted concerns in regards to the motivation of the law. It is also requested that both domestic and foreign NGOs be approved by the committee established by this law and that they carry out their activities following this approval.

Following the NGO law of 2017, many civil society organizations were shut down and some foreign NGOs had to stop their activities in Egypt. Egyptian police stormed some of their offices.

Despite pressure from the government, NGOs have tried to remain active. However, following the NGO law of 2017, many were shut down and some foreign NGOs had to stop their activities in Egypt. In this context, on February 9, 2017, Egyptian police stormed the office of the country’s leading human rights organization, the Al-Nadeem Center for Rehabilitation of Victims of Violence.

In addition to Nadeem Centre, Nazra for Feminist Studies and the Center for Egyptian Women’s Legal Assistance (CEWLA) also suspended their activities due to pressure from the government. The Cairo Institute of Human Rights Studies (CIHRS) relocated to its new headquarters in Tunis. Organizations such as the Association for Freedom of Thought and Expression (AFTE) and the Arab Network for Human Rights Information (ANHRI) have limited their activities and tried to avoid government pressure due to their critical coverage. However, they continued to remain visible in the public sphere.

The Sisi regime’s repressive policies towards civil society continue in different ways. Recently, the arrest of 31 people, including workers of the human rights organization called Egyptian Coordination for Rights and Freedoms, attracted the reaction of many civil society movements both inside and outside of the country. It is reported that one of the detainees is Aisha Al-Shater, the daughter of Hairat Al-Shater, who was one of the leading businessmen and influential figures in the Muslim Brotherhood organization before he was arrested in the post-coup crackdown on the movement.

Civil society in Egypt is far worse than it was during the Mubarak era. Government pressure has been increasingly limiting the activities of local and international civil society organizations in the country.

Meanwhile, many human rights organizations in the country have issued a joint statement against the operation, demanding the release of the detainees. The Egyptian Commission for Rights and Freedoms, Al-Nadeem Center for Rehabilitation of Victims of Violence, the Adala Center for Rights and Freedoms, the Cairo Center for Human Rights Studies, the Egyptian Front for Human Rights, and the Community for Justice have jointly stated that the Egyptian government’s policies towards civil society is unacceptable. Amnesty International also condemned the raid and called for the release of human rights activists.

Civil society in Egypt is far worse than it was during the Mubarak era. Government pressure has been increasingly limiting the activities of local and international civil society organizations in the country. Many experts also agree that the situation of human rights, rule of law, and freedom of expression in Egypt is worse than that of the Mubarak era. From this point of view, it’s clear that the current regime in Egypt – far from any form of democratization – dragged the country into a more totalitarian rule.