The end of regional transformation in the Middle East?

It may be misleading to state that the wave of regional transformation, which began in 2010, has come to an end despite the downward course of events in recent years. Many factors, both regional and international, have the potential to reactivate the wave of transformation in the Middle East. 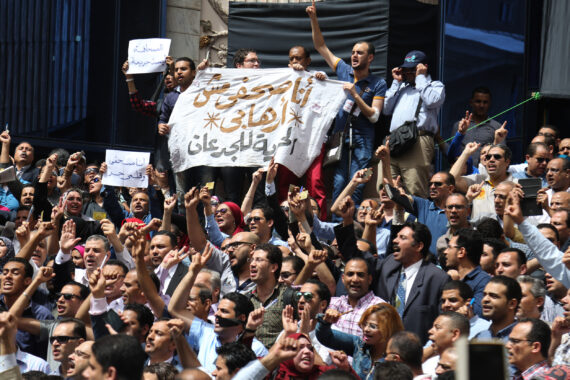 CAIRO, EGYPT - MAY 4: Egyptian journalists shout slogans during protest after security forces raided the Syndicate down town Cairo, Egypt, 04 May 2016. Hundreds of Egyptian Journalists gathered for an urgent assembly meeting in the Syndicate of Journalists building to discuss measures of escalation. ( Mohamed El Raai - Anadolu Agency )

The Middle East has been going through a transformation period that was triggered with the Arab uprisings, which began in Tunisia in December 2010. This process is an opportunity to re-shape the political and social structure in the region. While this regional transformation has led to societies question the existence of autocratic governments, which have been in power for many years, it also forced international actors to recognize their relationships with regional governments. As a result of these transformative events, the region has witnessed regime changes in many countries and continuing civil wars in others.

The wave of regional transformation came under attack with the intervention of actors who support the status quo in the Middle East. The main aim of these actors was to prevent any regime changes as well as an establishment of a new regional order. One of the most visible interventions of these actors took place in Bahrain, where peaceful demonstrations were violently dispersed by the Saudi Arabian security forces. Another example was experienced in Egypt, where counter-revolutionary actors initiated a military coup and prevented the country from turning into a democracy. In Libya, Syria, and Yemen, popular protests were faced with tough responses from the regimes, or were led to a proxy war with other regional actors such as the U.S., Russia, Iran, and Saudi Arabia.

In the light of all these developments, a number of analysts claimed that the process of Arab revolutions were all failed attempts. Although these claims have some truth attached to them, they fall short of reasonable accounts. It should be remembered that political and social transformations can still take place after long periods. More, since the region has, for centuries, been a battlefield for international actors, such a substantial transformation would require the extensive efforts of regional actors. However, there are four main reasons why we should be hopeful about the future of regional transformations.

First of all, despite all the discouraging events and developments, there is still a strong will among the populations of the regional countries for the continuation of the revolutionary processes. Despite the fact that political leaders aimed to protect their privileged positions, the calls for regime changes have been continuing. The general public and political oppositions in these countries demand the toppling of repressive regimes and the formation of democratic political structures.

Secondly, despite a region-wide alliance that aims to prevent the revolutions in the Middle East, there are various countries and political actors that have strongly revealed their support for regional transformation. Among these countries, Turkey and Qatar have relentlessly been supporting the people of the region, who seek for democratic regimes in their countries. In addition to this, as one of the strongest social and political actors in the region, the Muslim Brotherhood movement also supports the democratization efforts in the region.

Thirdly, it is important to question the success of counter-revolutionary actors who consider regional transformation as a threat to their own regimes. These actors have failed in their campaigns to prevent revolutionary uprisings so far. This can be observed in the cases of Syria, Yemen, and Libya. Additionally, their newly established alliances have proven to be fragile. Last year’s regional blockade on Qatar, which was imposed by Saudi Arabia, the United Arab Emirates, Bahrain, and Egypt, has not produced the desired outcomes – causing further anxiety among these actors.

It may be misleading to state that the wave of regional transformation, which began in 2010, has come to an end despite the downward course of events in recent years. Many factors, both regional and international, have the potential to reactivate the wave of transformation in the Middle East.