Most Turks believe that the United States is behind the Gülenists in general and the recent military coup attempt in particular, as even the New York Times belatedly found out: “Turks can agree on one thing: US was behind failed coup.” 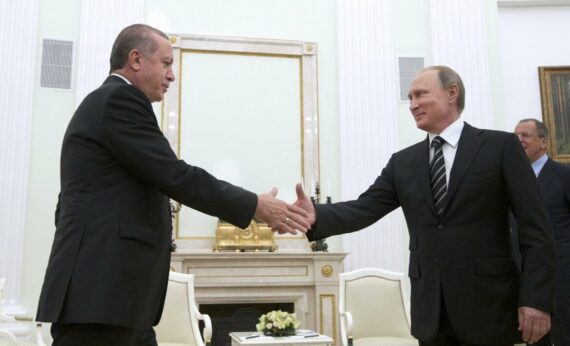 In order to assess the geopolitical dimensions of the failed coup in Turkey, first of all, one has to acknowledge that there is a near consensus in Turkey that the failed military coup was executed by the followers of Fetullah Gülen, who has been living in the United States since 1999. Gülenists are implicated in a wide range of criminal activities including terrorism, such as the assassination of the famous Turkish-Armenian journalist Hrant Dink; hatching plots to prosecute and imprison rival groups and leaders such as the imprisoning of the religious group known as Tahşiye>; extortion and blackmail targeting prominent public figures including businessman, academics, and politicians, such as the ousting of the main opposition party’s leader Deniz Baykal by using sex tapes; and blackmailing Selçuk University’s president to acquire permission for a Gülenist private university in Konya. Because of these and many other criminal activities, Turkish courts designated the Gülenist network as the Gülenist Terror Organization (FETO).

EnergyBy Büşra Zeynep Özdemir DAŞCIOĞLU
Second, and more critically for Turkish-American relations, there is also a broad agreement, including both right and left wing, conservative and secular journalists in Turkey, that the Gülenists were cultivated and nurtured by the Central Intelligence Agency (CIA) during the Cold War, both as a staunchly anti-Soviet and pro-American movement, and as an instrument with which to discipline the Turkish state and society while constructing a new kind of “moderate Islam.” Regardless of whether one accepts these arguments or dismisses them as conjectures based on circumstantial evidence, most Turks believe that the United States is behind the Gülenists in general and the recent military coup attempt in particular, as even the New York Times belatedly found out: “Turks can agree on one thing: US was behind failed coup.”At least since the 1990s, there has been a steady stream of news stories, columnists, and op-eds making the latter argument, namely, that the Gülenists are merely an extension of US intelligence within Turkish bureaucracy, military, police, business, and media. This argument has become increasingly widespread since 2014, and, in the aftermath of the failed coup attempt, the identification of the Gülenists as the main culprit of the failed coup, and the United States as Gülen’s primary foreign sponsor, has quickly become the basis of a national consensus. The disagreements, to the extent that they exist, implicitly revolve around whether the Gülenists have any significant autonomy from the United States, or whether they are merely an extension of the US’s intelligence apparatus without much autonomy or agency of their own. Despite this rather minor disagreement, however, the Turkish public mostly believe that the United States, using the Gülenists as its (at most semi-autonomous) instrument, condoned or even actively sought to overthrow the democratically elected government of Turkey on July 15, 2016.Third, following from the above, it is impossible for Turkish-American relations to be unharmed in a situation in which the Turkish public and the media, both pro- and anti-government, agree that the United States shelters a group that is officially designated as a “terrorist organization” by Turkey, and sometimes described as an esoteric religious cult with messianic pretensions, which orchestrated a military coup to overthrow the Turkish government. As mentioned earlier, the situation is even more severe if one believes, as many Turks do, that the Gülenists launched this military coup at the behest of the CIA or the US government.The suspicion of a US-backed military coup has a reasonable basis in Turkish history, since many historians and intellectuals concur that the United States backed the 1960 and the 1980 military coups, as well as the military memorandum (de facto coup) of 1971 and the so-called post-modern coup of 1997. Thus, for example, critical historian Professor Cemil Koçak of Sabancı University averred immediately after the failed coup that, “there cannot be a coup in Turkey without US approval” (Zaman, July 23, 2016). Many American observers who openly supported the military coup attempt (e.g. Michael Rubin of the American Enterprise Institute, or the retired lieutenant colonel Ralph Peters on Fox TV) or who implicitly condoned it by issuing suspiciously equivocal statements that treated Turkey’s democratically elected government as being morally equivalent to a military dictatorship (e.g. Richard Haass of the Council for Foreign Relations, or Congressman Brad Sherman of California), convinced most Turks that at least a powerful faction with substantial influence among policy makers in the United States supported the failed military coup attempt in Turkey. Thus, Turkish-American relations have already suffered and are likely to suffer more in the near future as a result of the failed coup and the suspiciously anti-democratic US responses to the coup.

Fourth, there are two main options for Turkish-American relations going forward.  First, the United States may convincingly demonstrate that it will not employ the Gülenists, or any other similar instrument, to exert influence in the Turkish military, bureaucracy, judiciary, media, and politics-at-large. Exerting such influence through covert networks is against the spirit of a genuine “alliance” between two sovereign political entities. According to leading Turkish policy-makers, including President Erdoğan and Prime Minister Yıldırım, the minimum prerequisite for the pursuit of this option seems to be the extradition of Fethullah Gülen from the United States to Turkey, which would signal the willingness of the United States to recalibrate bilateral relations as a genuine alliance.

The second option is the breakup of the Turkish-American alliance, and Turkey’s realignment with one or several other great powers to balance against the United States, since the United States would then be reclassified as a hostile power for sheltering Gülen and the leading Gülenists, who are implicated in the failed coup plot. Moreover, the United States may even be designated as the foreign state sponsor of Gülenist terrorism against Turkey. Russia, Brazil, Iran, Saudi Arabia, China, Pakistan, and France are among the many middle or great powers with which Turkey has established amicable relations, at least for a limited time (in the case of Russia and Iran), under AK Party governments since 2002. Russia is the most likely and nearby great power with which Turkey may seek to build such a balancing coalition in the near future. Turkish Eurasianists, an ideologically pro-Russian group composed of Kemalists, Maoists, and other leftist nationalists, have advocated such a pro-Russian reorientation in Turkish foreign policy for almost the past two decades, as I argued and demonstrated in my articles in Turkish Studies(2015) and in Ab Imperio (2004). However, pro-Russian sympathies go far beyond this radical intellectual movement in Turkey after the failed military coup, for various reasons.

Russian President Putin was the first major world leader to call President Erdoğan on the day after the military coup attempt to state his support for the democratically elected government of Turkey, and Russia is the first country to which Erdoğan will be paying an official visit since the coup. These two observations alone are indicative of a palpable pro-Russian reorientation after the coup. There are even reports, emphatically accepted and circulated by some Turkish journalists, that Russian intelligence warned Erdoğan just hours before the impending coup, even though there is no official verification of these reports. Moreover, the Turkish pilots who shot down a Russian bomber aircraft in November 24, 2015, which brought Turkey and Russia to the brink of war, have been taken into custody as suspects in the Gülenist conspiracy. This incident is cited as evidence of Gülenists deliberately trying to instigate a military conflict between Russia and Turkey, in the service of US interests.

Fifth, any new alliance that Turkey may form with another great power, including Russia, is unlikely to be as asymmetric and as exclusive as the Turkish-American alliance has been since Turkey’s entry into NATO in 1952. There is at least one objective and one subjective/attitudinal reason for this. Objectively, there is no other great power whose military economic capabilities would massively overshadow Turkey’s capabilities as do those of the United States. Thus, if a Turkish-Russian alliance was to be established, for example, the difference in bilateral military economic capabilities would not be as incomparable or as asymmetric as the difference in bilateral capabilities in the Turkish-American alliance. I have argued elsewhere that the military economic capability gap between Russia and Turkey closed considerably with the dissolution of the Soviet Union, only to widen somewhat with the rise in oil prices in the early 2000s. Subjectively, if Turkish-American alliance breaks up precisely because of the anti-American public opinion that the asymmetry of this alliance engendered over time, it is unlikely that the Turkish public opinion would be convinced to be part of another asymmetric alliance.

Finally, despite all of the above, it is still more likely, for structural reasons and simple path dependence, that the Turkish-American alliance will persist after a lengthy and tortuous renegotiation, in which significant political capital will have to be spent on both sides of the Atlantic. If such a renegotiation of the alliance succeeds, in the end, Turkey will continue to be a key US ally as it has been since 1952, but Turkey’s status within the Western alliance might then resemble that of France, a country that has been a US ally but with a set of preferences and priorities that differ significantly from the United States in certain important respects.

It suffices to remember that, as late as 2003, France led the opposition to the Iraq War within NATO, and Turkey surprised the world, including many Turks themselves, by refusing to participate in the US-led invasion of Iraq (although French foreign policy in general changed significantly during Nicolas Sarkozy’s presidency). These kinds of disagreements are to be expected and should be respected and tolerated in a genuinely multilateral alliance. The American-British initiative to invade Iraq, executed with a “coalition of the willing,” and its disastrous consequences for millions of Iraqis and the wider Middle East, including Turkey, provides a tragic cautionary tale against the dangers of asymmetric alliances with unilateral decision making.