Summarized in President Erdogan’s words, – “Many people in the world associate the African continent with extreme poverty, violent conflict and a general state of hopelessness. The people of Turkey have a different view. We believe Africa deserves better.” 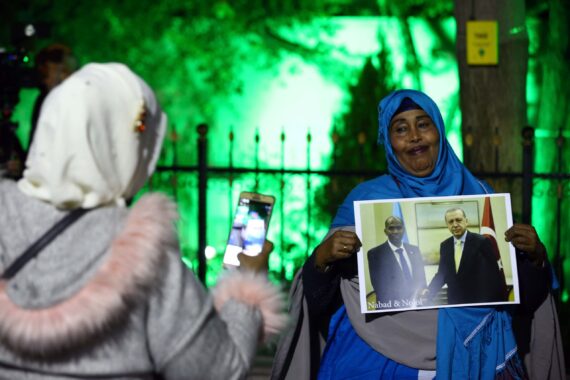 Somalians wait to welcome Prime Minister of Somalia Hassan Ali Khayre (not seen) during his visit to the victims of the terror attack in Somalia, who are currently under treatment at the Ankara Numune Hospital in Ankara, Turkey, on October 26, 2017. Anadolu Agency

The 5th African Union-EU summit which took place on 29-30 November, 2017, in Abidjan, Cote d’Ivoire, was seen as a landmark to strengthen political and economic ties between the two continents. With the title ‘Investing in Youth for a Sustainable Development,’ European President Donald Tusk stated that the aim of the conference was to ‘take decisions that will make the future safer and more prosperous for all our youth, both African and European.’ As a central point, both parties discussed ways to curb the migration uptick that has caused thousands of deaths as well as inhumane treatments in transit hubs such as Libya. The summit was also an opportunity to discuss the future of the EU-Africa partnership in several areas including trade, investment, and energy.

Changing the future of migration

Following the implementation of the EU-Turkey migration deal, which diminished a major part of the illegal sea arrivals in the so-called Eastern Mediterranean Route, Libya appeared to become the transit hub for clandestine migration. The country has a very delicate political system that is fragmented into different sections. While on paper the UN-backed Fayez al-Sarraj presides over the Government of National Accord, he is unable to govern the whole country as his authority resides in Tripoli alone. The reason for this is because there are numerous local militia groups that not only govern different areas of the country, but also govern industries such as oil. In such a chaotic political structure, the most disputed European policy was strengthening the Libyan Coastguard, which was alleged of various human rights violations. Nevertheless, while EU Member States insisted upon providing financial and technical support to Europe’s new “gatekeepers,” they began to “intercept” irregular migrants who attempted to arrive to the Maltese and Italian shores.

Despite all efforts, the Central Mediterranean route starting from Libya continues to remain a popular route for human trafficking. As President of the European Commission, Jean-Claude Juncker pointed out ahead of the summit – “[They] are no longer able to enter the house through the front door, they’ll keep making their way in through the back windows.” The “back windows” brought to the sphere striking scenes, including one that shows how African migrants are “sold” in the Libyan slave market.

For the first time in July, French President Emmanuel Macron proposed off-shore processing centers in Chad and Niger in order to help Libya deal with the excessive number of migrants and asylum seekers. This approach was simply based on the idea of establishing centers in which asylum applications would be made without entering European soil. Such a proposal fails to ensure the prevention of human right violations during the asylum processes. When taking into account the Libya slave trade scandal, Macron’s proposal had little chance to be approved by both parties of the summit. Therefore, the French President came with a proposal of military operations against human smugglers.

Apart from these disputed views, the summit recorded an agreement between both parties on taking preventative measures such as boosting investments, creating new employment opportunities and enhancing legal migration channels.

A focus on youth empowerment

While Europe’s dependency ratio is increasing due to the lack of people in working age, there are an estimated 800 million new labor force participants in sub-Saharan African countries. In this perspective therefore, opening channels for legal migration would be a preferred option for Europe so as to compensate the growing lack of labor power. One could ask how African leaders would be convinced to allow the migration of the skilled labor force – here, the EU’s financial investments would be decisive. For example, the new External Investment Plan, which was unlocked at the EU-Africa summit, intends to help attract private investments worth up to €44 billion. While the European Investment Bank has allocated over €20 billion for ongoing projects, the EU Trust Fund also exceeded €3.2 billion. Overall, post-2015 EU contribution to Africa is recorded as €88 billion. Almost 36% of Africa’s trade, including exports and imports, takes place with EU Member States. In addition, the EU is one of the top aid donors in Africa, with over €21 billion allocated in 2016. More, the investment of European companies constitute a third of the overall foreign direct investment to the continent.

One major factor that has contributed to the rise of European investments in Africa is China’s growing influence in the continent. In recent years, Chinese corporations have made great amounts of investments in sub-Saharan Africa, especially in the energy sector. What’s more, in July 2017, the first Chinese military base was established in Dijbouti. With its 300 personnel, the base will be used for supporting China’s military missions in the Gulf of Aden. Although the base aims to contribute to humanitarian aid and peacekeeping efforts, it is nevertheless a symbol of China’s growing desire to influence promising African economies. It can therefore be stated that the growing presence of China is one of the most challenging issues the EU faces when attempting to strengthen its ties with Africa. This is due to the fact that while the EU approach to the continent rests on its normative power, including human rights and democracy advocacy rhetoric, China’s efforts in Africa are simply based on economic motives – and this, undoubtedly, is more attractive for many African countries.

Unlike Europe and China, Turkey has emerged as a prominent actor in Africa by promoting peace and stability accompanied by effective humanitarian aid programs. Africa has become one of the key orientations of Turkish foreign policy and Turkey-Africa relations, based on strong historical ties, promise wider potentials in the following years. An event that illustrates the capability and importance of this bilateral relationship was when Turkey was declared a strategic partner of the continent by the African Union in 2008. With former Prime Minister Erdogan’s efforts, Africa-Turkey relations became more sustainable. In November 2016, the first Turkey-Africa Economic and Business Forum was organized in Istanbul. Over 3,000 people attended this forum and more than 2,000 of the attendees were visitors from African countries who came with the desire to create new trade channels. This was also an opportunity for Turkey to share its experiences as a developing country with successful economic reforms based on striking trade deals with its hinterland. The outcome of Erdogan’s efforts to build bridges with the continent reflected itself in the remarkable increase in the volume of bilateral trade – after Erdogan came into office in 2003, trade with Africa rose sevenfold, from $3.6 to $20 billion.

In the trade between Africa and Europe, oil, natural gas and mines have great weight. The gains of this trade however, are not beneficial to the “ordinary” African people. In comparison, Turkey’s investments also include small and medium-sized enterprises. For this reason, by leading to an increase in employment, it also provides economic benefits for “ordinary” citizens. More, Turkey, the world’s third largest humanitarian donor, has a development-based aid model with its foundations laid in empowerment, education and employment opportunities. This is reflected by the activities Turkish state agencies and non-governmental organizations engage in across the continent – building water wells, settlements and schools being among such activities.

In 14 years, President Erdogan visited 23 African countries, which is a record in Turkish politics. More, collaborating with international missions, Turkish military forces have been successful in operations aiming to combat piracy and illegal activities in the Gulf of Aden. In addition, only two months ago Turkey opened its largest overseas military base in Somalia, in order to embolden missions to assist local forces combatting terrorist groups.

Turkey’s multilateral policy comprises a basis for effective humanitarian aid and stability, and summarized in President Erdogan’s words, – “Many people in the world associate the African continent with extreme poverty, violent conflict and a general state of hopelessness. The people of Turkey have a different view. We believe Africa deserves better.”

The African Union-EU Summit was an opportunity for both sides to develop long-term policies between the two continents. Other actors such as China and Turkey will become increasingly active and apparent in Africa in the following years and therefore, in order to reach effective solutions, both parties of the summit ought to take the other into consideration. When observed within this context, Turkey, with its peace and stability mission, holds a unique role that draws a model for all other foreign actors pursuing their own interests in Africa. On one hand, President Erdogan has placed a strong emphasis upon the peace-building processes in areas that have experienced severe violence and civil war, and on the other, agencies such as TIKA, the Maarif Foundation and other Turkish NGOs, have taken part in the cultural, economic and political revitalization projects of many African countries. Hence, unlike Europe, which dictates its own development model in the region, Turkey is emerging as a friendly-partner for Africa.

Moreover, European leaders need to decide on what they really want. Considering Europe’s aging population, which drives a serious need for a new labor population, some leaders may interpret migration flows as a chance for eliminating this gap.

The question is whether Europe will provide shelter for the masses that flee unbearable conditions, or whether European leaders are just looking for new workers to compensate their labor population shortage. This question is also central for the EU’s so-called global moral leadership based on advocating democracy. Considering the endorsement of closed-borders and the rise of the “Fortress Europe” approach, it seems like the EU will merely fail this test.

On the same token, contrary to European efforts that seek to establish off-shore asylum processing centers and in contrary to “selective migration management,” Turkey has emerged as a new model on peace-making and fair partnership due to its humanitarian missions and military operations against terrorism and piracy, especially in the Horn of Africa.

Africa does not need to choose between two fully interest-driven parties – Europe or China. Rather, a model in friendly-partnership would emerge as a “third option.” As Turkish President Erdogan stated, “Africa deserves better.”