The rise of Islamophobia is not just a symptom of the new world disorder: it could also announce the end of the European dream. 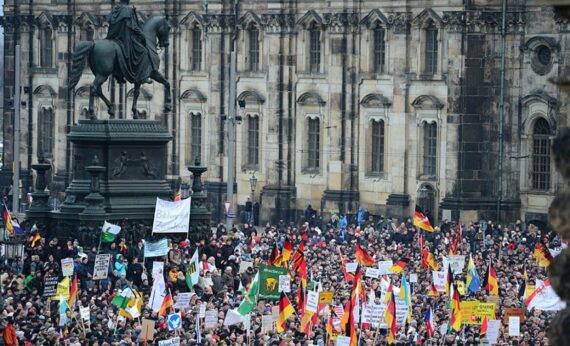 Following the end of the cold war, American political scientist Francis Fukuyama announced that the Western victory over the Communist bloc marked the beginning of a new era that would be dominated by cultural and economic liberalism, democracy and peace. The terror attacks against the United States of America on September 11th 2001 and the following wars in the Middle East (Afghanistan, Iraq and, more recently, Syria) have proven that, far from ending, history is “alive and well” and accelerating on a dangerously unpredictable path.

Nowadays, it is clear that Islamophobia constitutes one of the most troubling symptoms of this new global disorder, which seriously threatens to jeopardize world peace.

Nowadays, it is clear that Islamophobia constitutes one of the most troubling symptoms of this new global disorder, which seriously threatens to jeopardize world peace. Islamophobia can be defined, at its most general level, as the unfounded fear and dislike of Muslims, which leads to exclusion, discrimination, prejudice and sometimes violence. The main objective of this article is to complexify this first definition, which is insufficient if one really wants to understand and defeat this global plague.

Indeed, Islamophobia can only be grasped fully in terms of its complexity if one takes into consideration a series of intertwined factors. These factors range from the growing disparities generated by the globalization of the world economy to the difficult multicultural reshaping of homogeneous societies prompted by postcolonial migration flows, the challenge to national integrity from the multiplication of cultural, ethnic and confessional conflicts and the creation of proxy wars that mostly affect already struggling countries. Thus, the best way to approach Islamophobia is, first, to understand that it is a global and multifaceted phenomenon in a globalized world: media coverage and “common sense” could give the first impression that Islamophobia is a social phenomenon almost exclusively affecting Christian and Western (especially European) countries in which important Muslim minorities reside.

The best way to approach Islamophobia is, first, to understand that it is a global and multifaceted phenomenon in a globalized world.

It is true that, in recent years, countries such as France, Germany and the United Kingdom have witnessed a dramatic increase in Islamophobic acts. For example, the Collective Against Islamophobia in France (CCIF), which monitors all incidents on French soil that target Muslims, from verbal abuse and vandalism (mostly desecration of Mosques and other Muslim premises) to physical violence, including murder, recorded 905 Islamophobic acts in 2015, which is a sharp increase compared to the already high 691 acts targeting French Muslims in 2013. In just the first six months following the January 2015 Paris attacks, the CCIF registered a 23.5% increase in Islamophobic acts. However, even if these crimes are indeed higher in the European countries that host large Muslim communities, it would be a dangerous mistake to assume that the level of Islamophobia in Europe is mechanically proportionate to the size of the Muslim population.

The first paradox is that Islamophobia is also a widespread phenomenon in countries in which the Muslim population is almost inexistent, as shown by SETA’s (Foundation for Political, Economic and Social Research) latest comprehensive report. It can be seen that, where Muslims constitute a tiny fraction of the total population of countries such as Finland (0.8%), Romania (0.3%), Hungary and the Czech Republic (0.2%), Slovakia and Poland (0.1%) and even Lithuania (0.08%), Islamophobia remains a visible phenomenon in civil society. In the virtual absence of Muslim people, this targeting of Islam is accomplished at the media level (mostly in cyberspace, which easily escapes legal regulation) but also at the political level where the demonization of Islam is commonly used for electoral purposes.

In the virtual absence of Muslim people, this targeting of Islam is accomplished at the media level but also at the political level.

The second paradox is that Islamophobia is also present in countries in which Islam remains the most dominant religion. Countries such as Albania or Bosnia (and even Turkey, where less than 1% of the population is non-Muslim) are also confronted, to differing degrees, with more subtle but still pernicious forms of anti-Islam rhetoric, and sometimes discrimination.

The third paradox is even more counterintuitive since it shows that the presence of a larger Muslim minority and the rise of Islamophobic crimes do not automatically translate into a higher form of collective intolerance towards Islam. On the contrary, recent studies have shown that those European countries with the largest Muslim communities tend to have the most positive collective perception of Islam, whereas those countries that hold the most negative views of Islam are, paradoxically, European countries in which the Muslim communities are the smallest. In its 2014 report on public opinion in the European Union, the Pew Center showed that 64% of those surveyed in the United Kingdom and 58% in Germany (two countries where Muslims represent around 5% of the total population) have a favorable view of Muslims. In contrast, 63% of those surveyed in Italy, 53% in Greece and 50% in Poland have a negative view of Muslims, even though these countries have a lower percentage of Muslims in their total population (2% in Italy, 4.7% in Greece and 0.2% in Poland).

European countries with the largest Muslim communities tend to have the most positive collective perception of Islam, whereas those countries that hold the most negative views.

The case of France is even more telling: even though France has the highest percentage of Muslims compared to all other European countries (between 6% and 10%, depending on the data available), it is also the European country with the most favorable rating: according to the Pew Center study, 72% of French nationals have a favorable view of the Muslim minority. One could intuitively assume that the 2015 Paris terrorist attacks against Charlie Hebdo and a Jewish grocery store would have put an end to this trend of tolerance. Even though the number of Islamophobic actions dramatically surged in the aftermath of the terror attacks, one also notices a parallel rise in positive views of Islam and Muslims in the general public opinion in France (76% of those surveyed or a 4-point increase compared to the 2014 survey).

Many factors can explain this parallel rise of Islamophobia and Islamophilia: first, the French government and the main political parties (with the notable exception of the Far-Right National Front) convincingly explained that the main objective of DAESH was to divide and polarize French society and to turn the general population against its Muslim minority. Confronted with such a dangerous challenge, all Islamic denominations united against these terror attacks by stating they had nothing to do with the Islam practiced in France. This collective solidarity also allowed important Muslim figures to access larger media representation and challenge the provocative demonization of Islam sought by DAESH. Far from being a purely positive phenomenon, this higher collective understanding and tolerance towards Islam has also favored a dramatic rise in Islamophobic acts on French soil through the radicalization of the most anti-Muslim segments of the French population.

A society does not need to be in direct contact with a large Muslim community to express Islamophobic resentment.

In conclusion, a society does not need to be in direct contact with a large Muslim community to express Islamophobic resentment and, inversely, the presence of a strong Muslim minority can translate into a higher understanding and acceptance of Islam. However, it must also be remembered that such a growing tolerance towards Islam will not automatically make Islamophobia disappear. At a time when populist, xenophobic and Islamophobic far-right political movements are increasingly shaping the European political agenda, it is vital for the peaceful and harmonious future of Europe to clearly understand that the rise of Islamophobia is not just a symptom of the new world disorder: it could also announce the end of the European dream. The recent demonization of Turkey and Islam in the Brexit campaign reminds us that the next victims of Islamophobia could be the European nations themselves.

Philippe Barbé holds a PhD in literature from Northwestern University. He taught French professor at the University of California Irvine. He is currently teaching French language and literature at Marmara University. His main fields of interest are Francophone literature, postcolonial studies and Mediterranean studies.