The Future of Daesh: Cracks in the Wall?

The future of Daesh, in light of its ideology and presence in Syria and Iraq, is uncertain. 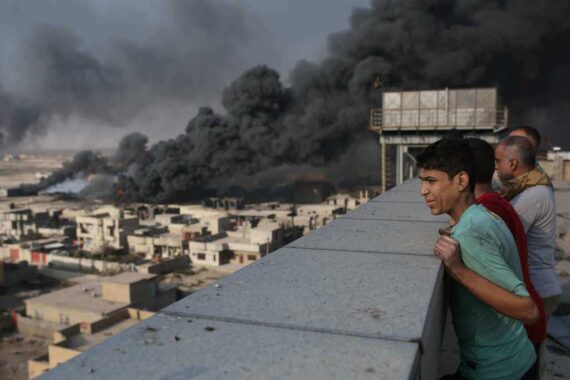 Mosul's local residents live in harsh conditions in the heavily damaged city as smoke rises from oil wells, were set on fire by Daesh terrorists to limit coalition forces pilots' eyesight and to make the wells out of service following Iraqi army's retaking of Al Qayyarah town. Photo by Yunus Keles, Anadolu Images

Security experts admit that we are living in a new era of terrorism and that the terrorist organization Daesh (ISIS) is its most outstanding example. Rafik Hariri Center for the Middle East organized a panel entitled “The Future of ISIS” to discuss Daesh’s legacy including its detainees and returnees, and strategies against a potential resurgence of the group in Iraq and Syria. The experts that participated in the panel discussed their views on the future of the terror group.

When Daesh jihadists declared the foundation of a so-called Islamic State in 2014, a battle between the Salafist-jihadi group and Al-Qaeda members broke out. According to Mohammed Abu Rumman, a Jordanian scholar and former Minister of Culture and Youth, the fight between the two extended all across the world, starting from Iraq and Syria and later crossing over to Yemen, Afghanistan, and North Africa. This included various Salafist jihadists some of whom affiliated themselves with Daesh while others felt closer to Al-Qaeda. According to Abu Rumman, even though both organizations have lost some of their influence, the fight and competition between them remains and is likely to continue in the future.

Daesh tried to build a strategy and ideology in Iraq, Syria, and other regions by branding itself a representative of Sunni communities. On the contrary, Al-Qaeda is more concerned with its struggle against globalization and its relationship with the United States, its “distant enemy.” According to Abu Rumman, the future of Daesh can’t be discussed without understanding the situations in Iraq, Syria, and Al-Qaeda together.

VIDEO: The future of ISIS

No Chance of an Insurgency in Iraq and Syria

According to Mara Revkin, a fellow at Georgetown Law’s Center on National Security and the Law, as a terrorist organization Daesh has few chances of staging a successful insurgency in Syria and Iraq. In order to survive, terrorist organizations must secure a political ground and economic resources for sustainable financing. Revkin explained that Daesh has neither political nor economic support.

The loss of its “caliphate” in Syria and Iraq was interpreted as a huge blow to the organization.

The loss of its “caliphate” in Syria and Iraq was interpreted as a huge blow to the organization. The group forfeited its technological bases and the territories it controlled, which were perceived as key areas for its continued presence. At the moment, this transnational terrorist group has been hindered from spreading violence and the changing dynamics have deprived the group of political and economic backing. Thus, the organization’s propaganda capacity has been doomed to fail.

Its limited activities, its internet and social media strategies, and losing its “caliphate,” turned the group into an underground organization and shifted its future plans. Abu Rumman noted that losses on the ground translate into a reduced presence on social media platforms, which are terrorist groups’ prime recruiting ground. A great contribution to this development was the declaration by the two social media giants, Twitter and Facebook, that they would not tolerate discourses encouraging violence on their platforms.

The Future of Daesh

The future of Daesh, in light of its ideology and presence in Syria and Iraq, is uncertain. Daesh lost all its strength including the local population’s support. Borzou Daragahi, a journalist and senior non-resident fellow at the Atlantic Council, argued during the seminar that their recruitment attempts constantly fail as the group has lost its legitimacy in the eyes of the local population, which stays away from the group.

In the future, it is less likely that Daesh will reorganize itself and establish strongholds in Syria and Iraq as it did in the past. The international community’s united fight against the terror group has effectively rendered a potential upsurge by Daesh impossible. This global effort is an exemplary case of  a global collaboration against a terrorist group.