As the economies in the West recovered after the Global Financial Crisis, their desire for reform in the global system declined. This indicated the fact that their commitment to change was not real, but pragmatic and self-centered. 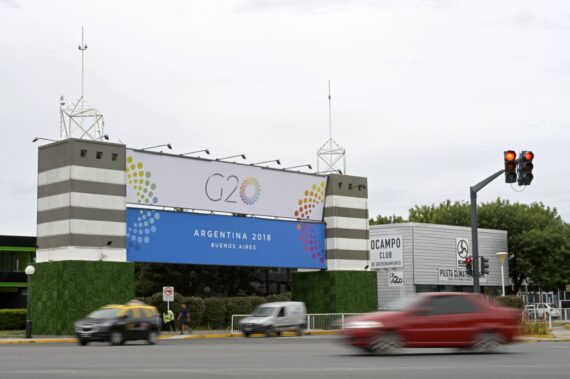 Partical view of the entrance to the Costa Salguero Centre which will host the upcoming G20 Summit in Buenos Aires, taken on November 27, 2018. Getty Images

When the Global Financial Crisis (GFC) erupted in 2008, the U.S. realized that this was not an economic meltdown that the U.S. or G7 countries could handle alone. Trade relations and financial markets around the world have become increasingly interconnected and complex since the 1980s, and this rapidly increased in the late 1990s. It seemed impossible to prevent the crisis from becoming even more destructive and contagious without cooperation and coordination among major countries. As a result, albeit reluctantly, the U.S. pushed the button to activate the G20, an international forum of the world’s major economies. During the broiling hot days of the GFC, the G20 was seen as the most powerful platform to lead global efforts to mitigate the effects of the crisis and to avoid new catastrophic crises in the future.

The G20 has made important progress in reshaping the governance of global finance by, among others, implementing macro-prudential policies; developing more strict rules on the ‘too big to fail’ problem; increasing the lending capacity of the IMF; and collecting richer information on the shadow banking system. Although the G20 has put noteworthy efforts in implementing global reforms in some areas, there is still much to be done.

Basel III, the new generation of global banking rules, was a good step for adjusting international banking regulations to consider systemic risks and develop a macroprudential approach. Focusing more on systemically important financial institutions (SIFIs) in regulations to address the ‘too-big-to-fail’ problem was also a vital move. However, all these new regulations and rules have not been strictly followed and implemented by every country yet. Even the Trump administration has been trying to roll back some of these regulations and rules.  As a result, in the period following the crisis, the global debt level increased, and major global banks became even bigger. G20 countries should take financial rules and regulations more seriously and monitor their implementation more closely.

While the financial capacity of the IMF was increased after the GFC, its available resources remain insufficient to meet the problems of the global economy. The distribution of voting power is another chronic problem in the IMF. Although some positive steps were taken after pressure from the G20, the governance structure of the IMF hasn’t been reformed enough to represent the change in the global economy over the last 30 years. Considering their growing importance in the global economy, many developing countries are still not represented fairly. Besides the U.S. has been blocking progress by using its veto card fecklessly. Whether the IMF is ready for the next global crisis in terms of its resources and structure is a big question mark.

The distribution of voting power in the IMF still remains a chronic problem. Considering their growing importance in the global economy, many developing countries are still not represented fairly.

There are some new initiatives such as the Asian Infrastructure Investment Bank and New Development Bank that are established to become alternative for the Bretton Woods institutions. The emergence of these institutions is valuable to create new external finance resources for the needs of the global economy.  But this time, some Western countries are skeptical about the advancement of these Chinese-led institutions. As competition increases, there will certainly be pressure on the Bretton Woods institutions to reform. For the stability and future of the global economy, it is needed to reap the benefits of economies of scale by combining all financial resources available, and to make the management of international institutions more inclusive. So, other G20 countries should put more pressure on the U.S. and some European countries to make more structural reforms in the IMF and World Bank.

The advancement of China-led institutions such as the Asian Infrastructure Bank and New Development Bank have caused skepticism among Western countries, which perceive these initiatives as a threat to the current established financial system.

No concrete steps have been taken to break the oligopolistic structure in the international credit rating market yet. Although these institutions were one of the leading actors that caused the crisis to emerge, they have not yet experienced sufficient reform. Conflict of interest and opaque rating methodologies still remain problematic. Many emerging countries complain that credit rating agencies make their rating decisions based on political winds rather than economic fundamentals. G20 countries can lead to the establishment of a multinational credit rating agency that has a transparent rating methodology, and a structure that is distant from the political turmoil and conflict that occurs in the international system.

The slowdown in the pace of global reforms is another big problem for the G20.  Western countries were more pro-reform when the burning of the GFC was deeply felt. As the economy recovered in the West, especially in the U.S., U.K. and Germany, the desire for reform declined, which indicated that their commitment to change was not real, but pragmatic and self-centered.

As the economies in the West recovered after the Global Financial Crisis, their desire for reform in the global system declined. This indicated the fact that their commitment to change was not real, but pragmatic and self-centered.

Escalating trade wars, U.S. sanctions against Iran, immigration issues, the Ukrainian crisis, and the Syrian conflict have led to sharp disagreements about major global issues among G20 countries. Different priorities and interests have been making it almost impossible to achieve policy coordination between countries. While it will be too naïve to expect comprehensive solutions to all global economic problems, G20 countries need to act on a common ground in critical issues and try to present and implement reforms in these areas.