The Great Climate Upheaval: One Billion People are Expected to Migrate by 2050 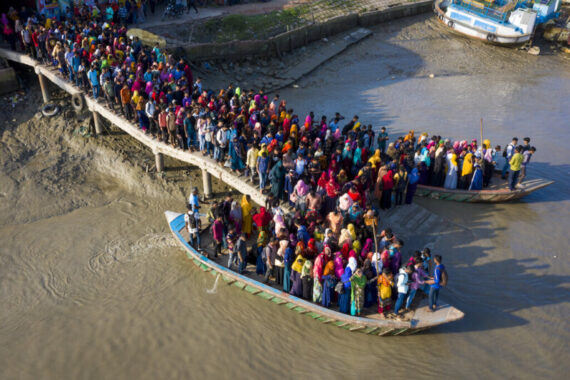 Aerial view of crowd of climate migrant workers hurries cross the Poshur river to attend to their office in time by boat at Mongla city in Bagerhat, Bangladesh on August 28, 2022. Photo by Anadolu Images

xtreme weather, rising sea levels, and damaged ecosystems may put billions of lives at risk. The “forgotten victims” of climate change will require a collaborative effort.

The International Organization for Migration (IOM), of the United Nations has projected that there will be as many as 1 billion environmental migrants in the next 30 years, with more recent estimates indicating 1.2 billion by 2050 and 1.4 billion by 2060. As the world warms further and the global population reaches its forecasted peak in the mid-2050s, this number is projected to increase dramatically after 2060.

According to the Institute for Economics and Peace (IEP), a research group that publishes yearly global terrorism and peace indexes, 1.2 billion people live in 31 nations that are not resilient enough to endure environmental hazards.

Pakistan, followed by Ethiopia and Iran, has the greatest number of people at risk of mass displacement. Haiti suffers the highest level of danger in Central America. In many countries, even minor ecological risks and natural calamities could result in mass population displacement, threatening regional and global security.

High-resilience regions, such as Europe and North America, will not be immune to the broader effects of ecological problems, such as the influx of a large number of migrants. In 2015, as a result of the wars in Syria and Iraq, two million refugees fled to Europe, highlighting the correlation between rapid population movements and political and social upheaval.

The term ‘Climate Refugees’ has been present in public discourse since 1985, when UN Environment Program (UNEP) expert Essam El-Hinnawi defined ‘environmental refugees’ as: “ those who have been forced to leave their traditional habitat, temporarily or permanently, because of marked environmental disruption (natural and/or triggered by people) that jeopardized their existence and/or seriously affected the quality of their life”.

Since 2008, the Internal Displacement Monitoring Center reports that over 318 million people have been forcefully relocated by floods, windstorms, earthquakes, or droughts, including 30,7 million in 2020 alone. This equates to one individual being relocated every second. Depending on the frequency and magnitude of major natural disasters, the total number of displaced individuals varies significantly from year to year, although the trend over the past few decades has been upward. Many are able to find safety within their own nation, while others are compelled to find safety abroad.

Several European nations, notably Germany, Belgium, and the Netherlands, were devastated by catastrophic floods in July 2021, resulting in fatalities and massive destruction. According to the latest report from the Intergovernmental Panel on Climate Change, the frequency and intensity of such severe weather events are projected to grow in the coming decades (IPCC). Climate refugees will likely rise in number.

Henrietta Fore, UNICEF Executive Director stated in a UNICEF press release, that “climate and environmental shocks are undermining the complete spectrum of children’s rights, from access to clean air, food and safe water; to education, housing, freedom from exploitation, and even their right to survive.

Virtually no child’s life will be unaffected.