The Gulf of Guinea: A New Strain of Piracy

The African Union and the UN Security Council should pass an urgent resolution and adopt a practical mechanism against pirates and maritime robbery in the Gulf of Guinea. 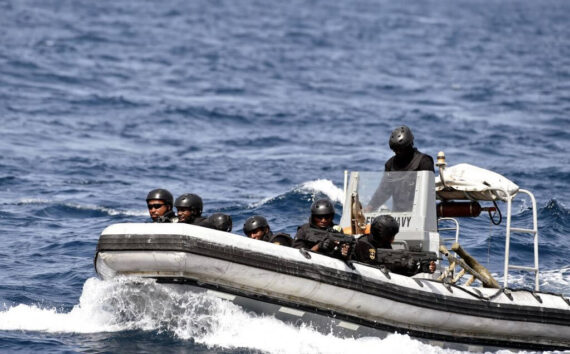 Nigerian special forces sail to intercept pirates during a joint exercise between Nigerian and Moroccan naval personels as part of Obangame Express, a multinational maritime exercise involving 33 countries off the coast of Lagos on March 20, 2019. Photo by Pius Utomi Ekpei, AFP via Getty Images

The Gulf of Guinea is a large nautical zone that traverses over 6,000 kilometers of coastline, containing a number of islands near West and Central Africa. It’s an important maritime route for commercial shipping lines from Europe and America to West, Central, and Southern Africa.

The Gulf of Guinea records over 90% of global crew kidnapping, piracy, and sea robbery. The latter have increased by 50% with 121 crew members abducted in 2019 compared to 78 in 2018. The kidnapping of the crews is not just a phenomenon faced by one type of ships: all types of vessels have been targeted at various sites from the coast.

Maritime piracy in the Gulf of Guinea frequently occurs in Apapa, Brass, Bonny Island, and Port Harcourt of Nigeria. There have been reported attacks in Benin’s anchorage, Cameroon’s Idenao and Doula, Ghana’s Takoradi, Ivory Coast’s capital Abidjan, Guinea’s Conakry and Equatorial Guinea axis, the port of Lomé in Togo, and Pointe-Noire in the Republic of Congo and its surroundings.

Piracy acts continue to rise exponentially, owning to petro-piracy, corruption in governance, unemployment, and the proliferation of sophisticated arms. According to the 2020 annual report by the International Chamber of Commerce’s International Maritime Bureau (IMB), the Gulf of Guinea recorded the highest number of crew kidnappings in 2020.

Read: Piracy and the Global Military Presence in the Gulf of Aden

Unemployment and poverty, compounded by weak law enforcement and corruption are the main factors that allow maritime piracy to prosper in the Gulf of Guinea. The most common form of piracy in the gulf and the most common armed robbery at sea is the hijacking of ships, with a focus on kidnappings and ransom payments.

In addition, the Gulf of Guinea’s oil boom has triggered attacks to steal crude oil from tankers and pipelines in order to transfer them illegally to refineries, thus adversely affecting the local economy as well as the environment. The Nigerian Navy is the largest on the coast of West Africa, but still lacks ability to tackle insecurity and piracy in the Gulf of Guinea.

The Niger Delta, one of the richest regions in Africa, has been turned into the most underdeveloped and polluted environment in the world.

The Niger Delta is an oil-rich region in Nigeria which has the largest natural gas reserve in Africa and has been generating 90% of Nigeria’s revenues for almost five decades. The oil explorations in the Niger Delta led to a disastrous impact on the diverse ecosystem of mangrove swamps, rain forests, and marine life resulting in contaminated rivers, environmental pollution, grinding poverty, gross corruption, and high drilling cost by multinational oil companies.

Only well-connected individuals benefit from oil production. The Niger Delta, one of the richest regions in Africa, has been turned into the most underdeveloped and polluted environment in the world.

These injustices aroused protest and activism from the inhabitants of the Niger Delta in the late 80s. The leader of activism in the powerhouse of Nigeria’s economy was Ken Saro-Wiwa, a writer and co-founder of the Movement for the Survival of the Ogoni People (MOSOP), who led a nonviolent campaign against environmental degradation of land and water by the multinational petroleum industry, namely the Royal Dutch Shell company.

During the peak of the protest movement, he was accused by the former military junta General Sani Abacha of the brutal murder of the Ogoni chiefs, who Saro-Wiwa accused of acquiescing to the government and Shell. Saro-Wiwa was hanged in 1995, despite international outcry.

Nonetheless, several notorious militant groups emerged from the Niger Delta. The most popular one is the Movement for the Emancipation of the Niger Delta (MEND), an umbrella militant organization in the South-South geopolitical area in Nigeria. The militant organization is known for attacking oil pipelines, kidnapping workers of oil companies, oil theft (bunkering), and carrying out gruesome atrocities during the celebration of the 50-year anniversary of Nigeria’s independence at the nation’s capital, Abuja, where a bomb they planted exploded. The mastermind of the bombing, MEND leader Henry Okah, was given a life sentence in South Africa.

Fifteen Turkish sailors are being welcomed by their families and relatives upon their arrival at early Sunday following their abduction by pirates by pirates off the coast of Nigeria, at the Istanbul Airport in Istanbul, Turkey on February 14, 2021. Photo by İslam Yakut. Anadolu Agency.

In 2009, amnesty was offered to the group by the late Nigerian President Umaru Musa Yar’Adua in return for laying down their arms, a monthly stipend, educational support, receiving vocational training, and a promise to share a significant percentage of the oil revenue with the Niger Delta government.

The promise aimed at building infrastructure such as primary health-care centers and schools. After Yar’Adua’s death, offering amnesty to former militants was stopped by corrupted government officials.

Internal conflicts and border disputes triggered piracy in the Gulf of Guinea as well. In the Gulf of Guinea, for example, politically motivated piracy aligned with the Niger Delta militants and the Southern Cameroon separatists envisions the new nation of the Federal Republic of Ambazonia. If this happens, the enclave will become a safe haven for pirates.

Recently, the Turkish cargo ship M/V Mozart sailing from Lagos to Cape Town, 100 nautical miles from the Gulf of Guinea, and northwest of the islands of São Tomé and Príncipe, was attacked, 19 of its members were kidnapped, and one was killed. On February 12, 15 Turkish seamen who had been kidnapped by the pirates were freed.

This is the second time Turkish nationals are abducted in Nigeria. According to the International Maritime Bureau, there are also piracy acts that go unreported. In the last decades, Somali pirates threatened one of the world’s busiest shipping routes, namely the Gulf of Aden. Now, piracy has moved to the Gulf of Guinea.

Securing the Gulf of Guinea is beyond the capacity of any current regional government. A number of existing subcontinent organizations share an interest in maritime security, but they don’t do enough to combat it. Such organizations include the Economic Community of West African States (ECOWAS), the Economic Community of Central African States (ECCAS), the Maritime Organization of West and Central Africa (MOWCA), and the Gulf of Guinea Commission (GGC).

Since not many efforts are made by member states of these organizations to combat piracy and maintain maritime security, the Gulf of Guinea has no significant contribution to curtailing maritime piracy. Various regional cooperation agreements such as the African Union’s Lome Charter and Yaoundé Code of Conduct have been adopted to combat piracy in the region.

Read: Search of Turkish Ship on the High Seas Was Illegal

The launch of a multinational coalition that will provide international intervention to support the affected nations and ships is necessary to tackle the constant piracy in the Gulf of Guinea. The intervention must include providing naval fleets, security forces, patrol ships, and antipiracy units to safeguard the region.

The African Union and the UN Security Council should pass an urgent resolution and adopt a practical mechanism against pirates and maritime robbery in the Gulf of Guinea. From this time onward, vessels and ships must have their own protection onboard including trained and armed forces in case of emergency and in order to protect the lives of their crews.

Abdullahi D. Hassan is a freelance journalist and writer from Nigeria. He has a keen interest in Northern Nigeria discourse, Islamic history, politics and environmental activism.