Western journalism in general is at the grasp of incredibly subjective and biased journalism to such an extent that they think that they have the liberty of framing everything as they please, even when the facts show the opposite direction. 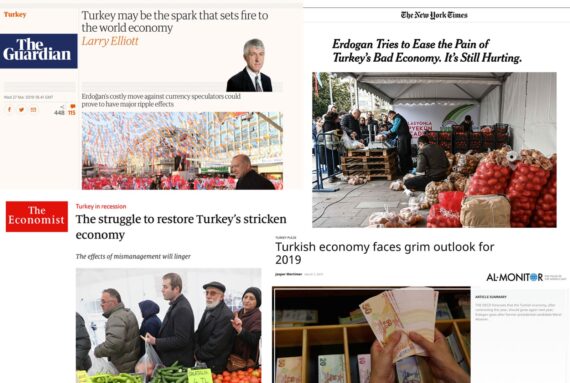 It was no wonder that Turkey would have experienced an economic slowdown after the exchange-rate shock that happened in May and August 2018, which has its roots not in economics but politics, as U.S. President Donald Trump made crystal-clear in his remarks and attacks against Turkey and even the Turkish Lira. However, the Turkish economy has the strength to quickly overcome this slowdown, despite incredibly biased and negative coverage of western media outlets in general regarding the Turkish economy.

It is obvious that the Turkish economy fared considerably well with an average GDP growth rate of 5.5 percent since 2002. More to the point, despite suffering several blows in the last few years such as the Gezi Park events, the 17-25 December “judiciary” coup attempt, PKK and DAESH terror attacks, and most importantly the July 15 military coup attempt, the Turkish economy managed to keep on track, grew well and averted an economic meltdown. It is not an exaggeration that almost no country could have managed to avoid any of these crises, yet Turkey has overcome all of them. And we should add up financial attacks that took place in the last two-and-a-half years against the Turkish economy to the list of blows that occurred since 2013. Right after the July 15 military coup attempt and with the growing tensions between the U.S. and Turkey, the Turkish economy started to suffer financial attacks, which were fueled considerably by the U.S.-based “international” credit rating agencies and western media outlets, alongside, of course, the U.S. itself.

Despite several blows, the Turkish economy managed to keep on track, grew well and averted an economic meltdown.

Let’s face it: the approach of western media outlets towards Turkey has never been objective or friendly, contrary to the extremely naïve discourse that they were only after the dissemination of knowledge. No, in the final analysis, everybody is after keeping and increasing power. And, for a media outlet based on and, quite intuitively, on the side of the world’s hegemonic power or its “traditional allies,” being stronger requires not spreading more information on an objective basis, but, intuitively, twisting and skewing facts, according to their “interests” and needs in general.

Exactly for this reason at large, white people, i.e. the “original” westerners, cannot be terrorists, but lone wolfs, lunatics or “formerly angelic boys,” when they shoot dead large numbers of people with semi-automatic and/or automatic weapons. However, “non-whites” and Muslims can easily be terrorists. And, wait a minute, they can all be potential terrorists, as the long-lasting repercussions of 9/11 clearly attest. Moreover, illegal deeds such as spying and terror-related activities are so eagerly denied and swept under the carpet of journalism when it comes to Turkey. But when the self-interest of western countries is at stake, “journalists” could easily be “enemy agents” or “activists,” hence criminals or possible criminals, respectively.

Is this good and objective journalism? We all know that it is not. And, why would you stop here? Why would you not pursue your self-interest when it necessitates twisting facts and events in other areas, such as… economics? At this point, I should openly state that arguing otherwise, i.e. that these media outlets are just making news objectively, is the greatest conspiracy theory by far in the world.

While western media outlets were never “fans” of Turkey, after 2013 their stance against Turkey increasingly deteriorated to the point of stark hostility that we are witnessing today. Their reports regarding Turkey has almost always been on the negative side, and mostly on the far negative side. And, their extremely negative reports on Turkey have almost always been rhetorical, not analytical, i.e., they are not well-structured, they fail to give a full picture with right connections, and, incredibly, they fail to base their “assessments” on relevant numbers. Their reports are extremely short on numbers and very long on politics, and harsh criticisms and “assessments” that they badly fail to substantiate. When they seldom do give one or two numbers, they do this in a blatantly subjective and deficient way. What they do is exactly “negative framing.”

The Turkish government is ultraconservative with regards to budget discipline, yet those western media outlets have been talking about their “worries” regarding fiscal profligacy in Turkey. Really?

For example, as I touched upon extensively in one of my previous articles, some of these media outlets put forward the level of “short-term foreign exchange liabilities of nonfinancial firms” in Turkey as a justification for their “assessment” that the Turkish companies were in a bad situation. However, they failed to provide the other side of the coin, i.e. the level of short-term foreign exchange assets of the same nonfinancial firms, which were 6.5 billion dollars more than their corresponding liabilities.

Even more curious is that in the last couple of months, those western media outlets frequently put forward budget deficit and public debt level as a worrying factor regarding the macroeconomic stability in Turkey. However, they incredibly fail to mention the relevant numbers. Why? The answer is crystal clear: Turkey has absolutely no such a problem. Public debt to GDP ratio in Turkey is just 28 percent, one of the lowest in the whole world. And budget deficit to GDP ratio in the last year was around 2 percent, which is well below the related Maastricht criterion, in the year of economic stagnation. More to the point, the Turkish economy contracted by 3 percent in the last quarter of 2018 as a result of the currency shock, but the government did not try to increase its spending level in order to boost the economy as the public spending level increased by just 0.5 percent in that quarter.

With such a low level of public debt to GDP ratio, the Turkish government could have easily increased its deficit to an extent in congruent with the Keynesian countercyclical fiscal policy understanding and without sacrificing budget discipline

Make no mistake: with such a low level of public debt to GDP ratio, the government could have easily increased its deficit to an extent in congruent with the Keynesian countercyclical fiscal policy understanding and without sacrificing budget discipline, particularly after the currency shock of 2018. Turkey had and has ample room to do that. But it chose to stick to very low levels of public debt.

Yes, it is incredible. The Turkish government is ultraconservative with regards to budget discipline, yet those western media outlets have been talking about their “worries” regarding fiscal profligacy in Turkey. Really?

All in all, western journalism in general is at the grasp of incredibly subjective and biased journalism to such an extent that they think that they have the liberty of framing everything as they please, even when the facts show the opposite direction. Blacks can be whites, whites can be blacks according to their self-interest. And their self-purported objectivism is just a convenient but required guise to “sell” their product of biased journalism, which ultimately is in place to serve their self-interest.