The Propaganda War over Northern Syria: Who Wins? Who Loses?

Why do European countries harshly criticize Turkey's Operation Peace Spring in Northern Syria? One of the answers lies in the imagined idea of Rojava. 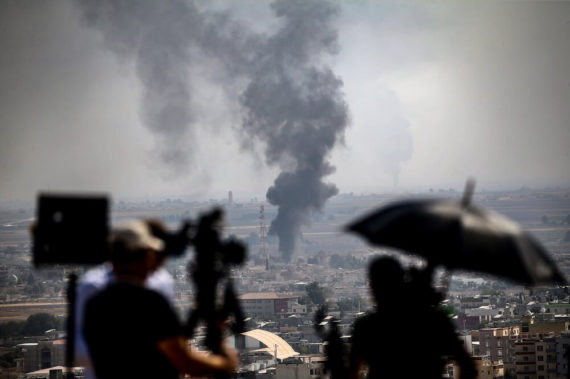 Turkey’s cross-border military operation, Operation Peace Spring, was launched on October 9, 2019. The Turkish Armed Forces secured some critical targets including Rasulayn and Tal-Abyad. After the operation started, numerous fake news stories and manipulative content were published targeting Operation Peace Spring and the endeavor was turned into a propaganda war. With the YPG forces about to quickly lose their power and domination in Northern Syria militarily, they have turned to the long-standing support of Western nations as a way out. And for this, they are relying on their well-oiled propaganda machine.

Which tools are being used by the YPG in the propaganda war? First of all, the YPG’s main goal is getting the support of Western countries and encouraging them to use their foreign policy tools. And indeed, they appear to be successful in gaining the public support of most Western countries. These countries now threaten Turkey with embargoes and military measures to end the military operation. Finland, Norway, Netherlands, Germany, and France have already suspended arm sales to Turkey. European countries are trying to force Turkey to terminate its operation in the region.

But why are European countries acting so harshly towards the operation? One of the answers lies in the imagined idea of Rojava. For a long time, Rojava, the YPG-led autonomous region of Northern Syria, has been imagined in Western media as a democratic and pluralistic society flourishing in the heart of a troubled Middle East. However, the reality on the ground was quite different, with the YPG carrying out a campaign of violence, intimidation and displacement in order to secure territorial gains.

After the capture of Northeast Syria by the YPG forces in 2012, the PKK’s long-lasting democratic autonomy project was implemented in Rojava. At this point, it is crucial to understand what the PKK’s democratic autonomy project is. Since 2007, both the PKK and ethno-nationalist separatist Kurdish political parties have underlined that the solution to the problems facing Kurds requires the creation of an autonomous region enabling Kurds to govern themselves, without the intervention of any other actor. This project began to be implemented with the establishment of Rojava with this region becoming a laboratory for this project. But the terrible abuses carried out in the name of establishing Rojava speaks for itself.

Instead, most Western media channels depicted life in Rojava as a place where women and other vulnerable groups directly participated in political processes, and where decisions are taken by consensus. Indeed, most of this coverage paid specific attention to the secular policies of Rojava and compared it to the practices of the Daesh.  For instance, the New York Times Magazine defined Rojava as a “Dream of Secular Utopia in ISIS’ Backyard” and underlined how secular education policies were being implemented in the region.

Because of this reason, Western media channels have also represented the YPG as freedom fighters who ended the brutality of Daesh in the region. The operation by Turkey was therefore perceived as the fall of the Rojava dream. This was reflected in the remarkable headlines and stories by some Western newspapers and journals such as “Rojava Betrayed. An End to our Dream of Revolution?” and “Turkish Attack on Syria Endangers a Remarkable Democratic Experiment by the Kurds”. Therefore, the long-lasting glorification of Rojava in the Western media strengthened the hand of the YPG in the propaganda war.

The first days of the operation and the success of the Turkish Armed Forces on the ground show that success in a propaganda war has not changed the real situation for the YPG. Because of this, the YPG has been trying to find a new ally to push back against the Turkish army. In order to seek a way out the YPG appears to have shaken hands with the Assad regime and Russia. When for so long the Assad regime has been blacklisted for its brutal role in the Syrian civil war, including the use chemical weapons on civilians, how such an alliance will impact the YPG’s image into the future remains to be seen.