The liberal international order has been challenged by the rise of China, the resurgence of Russia in the Middle East and in Europe, and the Brexit, a product of the populist movements throughout the West, including the U.S. Turkey has had to face security, foreign policy, and economic challenges in its immediate neighborhood as well as those emanating from the unpredictability of the international system. 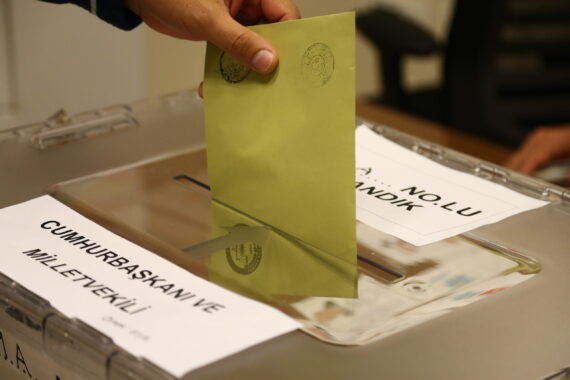 People arrive at the Turkish Embassy in Belgrade to cast their votes for Turkey's presidential and parliamentary elections on June 24, in Belgrade, Serbia on June 17, 2018. Anadolu Agency

The very rationale for the change in the system was to never go back to the weak and unstable coalition governments the parliamentary systems tend to produce. The 1990s produced many weak coalition governments often under the shadow of the tutelary system maintained by the military and civilian bureaucracy. The AK Party governments brought stability in the 2000s but were continuously challenged by these forces. The 2007 presidential elections and the 2008 closure case against the AK Party are examples of this.

The AK Party’s electoral victories ensured the primacy of the elected governments against the appointed but the system continued to be a holdover from a foregone era. Once the various initiatives for a comprehensive constitutional change failed because of political reasons, the partial amendments to the constitution were made. The latest yet the most critical one of these amendments is the transition to the presidential system, approved in last year’s referendum.

In addition to the domestic drivers of the change to the presidential system, Turkey’s foreign policy challenges and its immediate neighborhood contributed to the country’s search for more stability. The Arab Spring produced the most challenging humanitarian catastrophe in Syria, resulting in more than 3,5 million refugees for Turkey. Turkey’s border security was challenged in addition to the increased threats posed by Daesh and the PKK as a result of the Syrian Civil War. Instability in Iraq and the confrontation between the U.S. and Iran over the nuclear issue are only some of the examples of an increasingly unstable environment.

The liberal international order has been challenged by the rise of China, the resurgence of Russia in the Middle East and in Europe, and the Brexit, a product of the populist movements throughout the West, including the U.S. Turkey has had to face security, foreign policy, and economic challenges in its immediate neighborhood as well as those emanating from the unpredictability of the international system. Moreover, in an era when the U.S. has refused or been unable to provide leadership, the Western alliance has found itself increasingly fractured, unable to forge comprehensive policy solutions to a variety of challenges.

Committing to and aligning itself with an international bloc to resolve its international and domestic challenges were no longer an option for Turkey. Diversifying its relationships and compartmentalizing issues with various powers became a necessary practice to navigate an uncertain international environment. At home, the political system continued to be rife with challenges emanating from the lack of a truly civilian constitution and a system that is based on the will of the people. The need for a civilian constitution and a truly democratic system devoid of the institutional tutelage has been the central political debate of the past several decades. The official transition to the presidential system this weekend signifies a critical turning point in that effort.

Any system change would need time to be implemented and to mature over time through challenges and political crises and Turkey is no exception. It is easy to get caught up about who is going to win and what the parliamentary seat distribution is going to look like. However, it needs to be remembered that the June 24 elections are part of Turkey’s quest for domestic stability in an increasingly uncertain international environment.