The Leftist Violence in Turkey

Let’s not forget that the clashes and deaths during Gezi Park started after the CHP canceled their Kadıköy meeting and directed its masses to Taksim. Unable to accept the results of the referendum, CHP has once again called people to the streets. 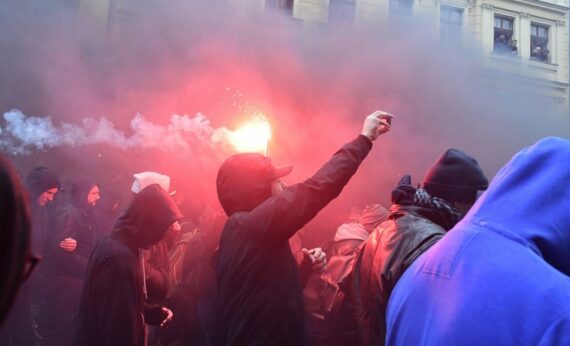 When the opposition wasn’t able to produce the results they wanted in Turkey’s constitutional referendum, the usual muttering, baseless allegations, rejections and lastly the call to the streets began. This call inevitably reminded the people of the Gezi Park violent protests, which caused a trauma in society’s collective memory in recent political history, and gave way to clear acts of violence. It brought to mind images of vandalized public and private institutions, burnt down public transport vehicles, construction equipment, police cars and even vehicles belonging to the media; damaged ATMs and CCTVs, ransacked shops, uprooted pavements, garbage containers, seized construction equipment driven towards the prime minister’s residence, the burning down of AK Party bureaus…

The society’s acquaintance with the left’s relation with violence goes back to the 1970s. Armed assaults by various leftist organizations towards the police, businesspeople and notables; fights with sticks and stones, and clashes with Molotov cocktails were all witnessed by the people; however, these acts of violence were usually limited to small groups. The mass leftist spiral of violence, as if they were under hypnosis, occurred during the Gezi Park protests, and was unprecedented.

Firstly, we have to accept that, even though they are the ones who use the rhetoric of democracy the most, the left cannot be democratic due to its nature. This is because the left believes that history is about conflicting social classes and that the dominating classes can only be overthrown through force. In their belief, classes ruling the society will never willingly give up their powers to the downtrodden; therefore, the oppressed masses should organize themselves and depose their oppressors. They believe there is no other way.

As their objective is “sacred,” the ends will justify the means; the toolset of violence, including armed uprising, are legitimate. Elections, ballot boxes, and the parliament are all “bourgeois institutions” which have to be annihilated, eventually; that’s why Lenin says that the parliament is “the barn of bourgeois.” These institutions, according to them, will only have meaning in the dictatorship of the proletariat after the revolution.

Therefore, being a “guerrilla in the mountains of Dersim” or forming “armed propaganda units” in cities is more attractive than managing campaigns and trying to garner votes for parliamentary elections. Because those who arm themselves and try to dismantle the state mechanism are fighting for the future of the people. All of them are brave revolutionaries who are sacrificing their lives for revolution.

Let’s remember the Çağlayan Courthouse incursion on March 31, 2015. We still remember the praise heaped upon the DHKP-C militants who first held prosecutor Mehmet Selim Kiraz hostage and then martyred him, and how the hashtag #BizDeSiziSeviyoruz (#WeLoveYouToo, referring to the militants) became popular on social media afterwards. We didn’t hear the slightest of condemnations against this murder from the left; on the contrary, leftist groups even embraced it. Even the Cumhuriyet daily ran a headline and content that attempted to legitimize the murder. A journalist reported a telephone interview with the terrorists (whom the journalist presented as poor young revolutionaries that were forced to take such an action).

When the murders of the Sabancı Center occurred in 1996, all the leftists praised the act as a “strike against Turkey’s bourgeoisie.” When riots in the Gazi neighborhood took place in 1995, the left produced violence as much as they could from the existing chaos. Alevi coffeehouses were assaulted and with the incitement following afterwards, tens of people lost their lives due to police firing on protestors. There were clear provocations; however, leftist groups started their tour de force since day one. All the walls of the neighborhood were filled with revolutionary mottos, militants coming from other cities were settled in the neighborhood, and all groups seized areas and clashed with police for days. In the following years, while a smaller leftist group, which I was a part of, used the motto “Never again!” after the Gazi riots, all the other leftist groups employed “One, two, three, more Gazi!” as their motto, referring to the Vietnam War.

Amidst the clear massive hysterical violence of Gezi Park, there were other acts of violence which the protestors tried to keep it hidden. All leftist groups occupied certain areas and hung their flags and banners on the barricades they made there. There were some groups which even stopped and checked the IDs of people who entered their “territory.” One group stopped and beat down a young person who was passing with a beer can in his hand.

Two homeless people were tortured by militants of the Socialist Reconstruction Party (SYKP) at an abandoned building they had invaded (another dimension of violence) and named “Berkin Elvan House of Occupation.” Coincidentally, the media covered this. When one of the perpetrators was suspended from the party, the case was closed.

The appraised violence of the “revolutionary” left permeated both their actions and discourses. Their rhetoric and practices reek of militarism. For instance, on May 1, which is mostly disregarded all around the world, but is deemed as a “holy day” by the Turkish left, some leftist groups wear matching uniforms, carry red flags of the same size, get into military formations and pace around while singing anthems. They are as orderly as a military unit. These groups have certain supervisors who ensure that the order is maintained and no outsider joins their march.

The names and the terminology of these groups reflect militarism. Names like “People’s Liberation Front,” “People’s Liberation Army,” and “Liberation Army of Peasants and Workers” have existed since the 1970s. Military terms in the leftist jargon are also quite frequent. For instance, the Western term of “struggle” was accepted as “war” (savaş) by the Turkish left. There are many other military terms in the leftist jargon: triumph, martyr, enemy, platoon, fortress, armed revolutionary units, siege, front, retreat, rear guard, offensive and so forth.

In anthems that are written for militants who were killed during clashes or terrorist acts too, hints of militarism can be found. In Grup Yorum’s anthems there is much praise for machine guns, Kalashnikov rifles, fortresses and armaments. This is the reason behind semi-military street demonstrations where red masked and armed militants march in certain areas like Okmeydanı or Gazi.

Is the situation any different in the CHP, a mainstream political party? It is unfortunately not. No one can’t utter any negative opinions about leftist figures like Mahir Çayan, Deniz Gezmiş or Che Guevara at any local branch of the CHP; as they consider these figures part of their tradition and show them the utmost respect. Let’s remember Kemal Kılıçdaroğlu’s portrait right beside Deniz Gezmiş’s and his speech at the parliament, saying “I’m Kemal from Dersim! I’m Kemal the Revolutionary!”

We are acquainted with the violent demonstrations by community centers and student collectives affiliated with the CHP: their clashes with the police or other groups, and their assaults on kiosks opened by conservatives. Or, we know that it’s almost a tradition that CHP deputies try to protect the members of illegal leftist groups who are detained, to the extent of becoming their lawyers. The distance between the radical left and the CHP is shorter than assumed.

Let’s not forget that the clashes and deaths during Gezi Park started after the CHP canceled their Kadıköy meeting and directed its masses to Taksim. Unable to accept the results of the referendum, CHP has once again called people to the streets. They may be justified in venting anger over not being able to become the ruling party; however, actions go far from using legitimate political channels, and make them responsible for all the negative consequences that might follow. The cost of the constant call for chaos could be high. It should be remembered that one cannot achieve any political outcome with such methods in the newly accepted system of government.

Cengiz Alğan completed his BA in the Department of English Language and Literature at Gazi Univeristy, Ankara. For the last two years, Alğan has been working as editor and commentator for Büyüteç, a weekly TV program on politics.