The Misuse of Integration as a Kampfbegriff in Germany

There is a deep divide among Turks and German authorities as well as, sadly, the common citizens. If Germany was able to both take a positive step towards the Turkish minority and refrain from demonizing Turkey, the country would have acted culturally in a more modest and proper manner. 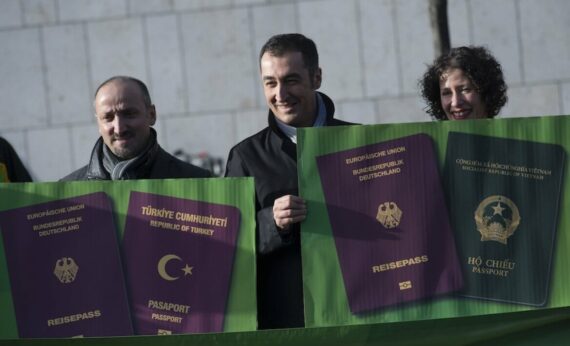 2017 seems to be a crucial year for the world politics. Donald Trump’s coming to power, the elections in Austria, Netherlands, France and Germany, and Turkey’s recent referendum are all significant events. Long before the actual date of the referendum in Turkey, Europe had been reunited in saying “No” to the referendum. State-sponsored and financed propaganda campaigns in Germany against a possible “Yes” aroused disappointment and frustration for many Turks. Not only were private media corporations such as Spiegel, Stern, and the Frankfurter Allgemeine Zeitung constantly, almost daily, apparent with their traditional tools of anti-Turkish headlines, images and cartoons—who made every effort to strengthen the “No” camp—but also state institutions such as the TV-Channel ARD, which broadcast propaganda regarding Turkey’s referendum by presenting false claims to their audience. Perhaps the most brutal case was the denial of Turkish ministers’ entry to Europe in order to campaign for the referendum.

It is of no surprise that after the referendum which resulted with the victory of the proponents of the constitutional change, populist and racist remarks began to flood in the media: AFD’s Beatrice von Storch tweeted that those Turks who voted for the constitutional change (in her words “Islamic dictatorship”) should please immediately leave Germany. Voices of the political center from the CDU to the liberals FDP spoke in favor of breaking up negotiations with Turkey for a EU-membership. This seems to represent the current state of mind of many Germans: according to a survey done by ARD-DeutschlandTREND, 64% are in favor of ending the negotiations with Turkey. But, in the same survey, a restriction was postulated which would effect their fellow citizens directly. 58% of Germans took a clear stand against dual citizenship. Around 3 million people of Turkish origin are living in Germany, out of whom 1.4 million have only a Turkish nationality whereas around 500,000 have dual nationality. The suggestion against the legality of multiple nationalities comes not out of nowhere and is not a new threat against the Turks either. Since a pro-democracy rally in Cologne in the aftermath of the coup attempt in 2016 in Turkey, the validity of dual nationality had become a heated debate topic. But why is the question of a legal status of such an important matter when it comes to Turks?

Before answering that question, it is necessary to outline the development of the right of citizenship for non-natural Germans. The first nationality law was created in Prussia in 1842, in which it was written that German citizenship was based on the right of the blood (Ius Sanguinis). Hence, naturalization was not possible. In 1913, the legal definition was changed and naturalization was allowed. This law lasted until 2000, and in order to be naturalized as a German, one had to reside in Germany for 15 years. One of Angela Merkel’s closest CDU politicians, Peter Altmaier, and a new generation of different party members started to question this legal regulation in the midst of the 1990’s. The coalition of SPD and Alliance 90/The Greens renewed the nationality law in 2000— the so-called “model of options”—which extends German citizenship based on the right of the soil (Ius Soli). The children of immigrants born in Germany— for example whose parents live in Germany for 8 years or have permanent residence— would have dual citizenship until their twenty-third birthday, at which time they were supposed to choose only one nationality/option to keep.

Additionally, since 2008, German language skills are required to fulfill the naturalization. The general rule for citizenships of other nationalities is quiet simple: if you are elected to become a citizen of another country, you lose German citizenship, which is relative due to many exceptions of having dual citizenships. For Turkish citizens, the right to have dual citizenship was denied for a long time. The younger generation was favored by the most up-to-date reform in 2014, which is the center of conflict today. The model of options was eliminated for those children of immigrants from non-EU countries who still had the option to chose amongst the citizenships, and also either lived at least 8 years until their age of 21 in Germany, went to school for 6 years, or have an adequate verification of education.

After 400,000 Turks voted “Yes” in the referendum (63.1 % of the total), the governing party CDU and her allies made it clear that the dual citizenship for Turks would be a central election topic. Stephan Mayer from the CSU was quoted in the newspaper Die Welt as saying, “I think it is important that in the next legislative period we revoke the easement of the dual citizenship.” CDU’s Thomas Strobl told the same journal that “Germany must react with clear consequences towards the dual citizenship of Turks in Germany.” The argument for those claims is that one who lives under the liberties of Germany in a constitutional parliamentary democracy cannot vote for such a system change in Turkey.

Following the remarks made in 2010 by Chancellor Angela Merkel which suggested that multi-culturalism had failed, integration now seems to be a failure (again). But the dominant arguments in the German public have, for quite some time, ignored social, political and cultural dimensions of decisions in Turkey made by the Turkish diaspora. Firstly, Turkey has become neither an autocracy nor a dictatorship—both being result of a persistent propaganda that created a clear prejudice in minds.

No doubt, it can only be considered a bad adaptation of orientalism by persons such as Julia Klöckner of the CDU who characterizes the Turkish President as the “despot of the Bosphorus.” The historical legacy of the term “Despotizm”, used from Montesquieu to the colonial British power in the 19th and 20th century intended to degrade the legal order in Ottoman Turkey, saying that their leaders are despots – not bound by law. And why and with which right is the political maturity of Turkish citizens voting for a “Yes” to be disregarded? This actually resembles a paternalistic, arrogant attitude which is best summarized by Gustav Le Bonne who simply put it as “for the people, despite the people.”

Finally, the political atmosphere in Turkey can hardly be compared to any other institutionalized country in the West. Having a war on its border in Syria, overcoming a coup attempt on July 15th, and having been threatened by three main terror organizations within and outside his borders, namely the PKK, FETÖ and DAESH, the Turkish people are predominantly looking for security, economic prosperity, and, above all, social service. And this is what the AK Party and, its leader Recep Tayyip Erdogan has provided the Turkish people over the last 15 years as a government.

After the referendum, self-reflection and critique has not been common among the German public. But it should be remembered that there is a deep divide among Turks and German authorities as well as, sadly, the common citizens. If Germany was able to both take a positive step towards the Turkish minority and refrain from demonizing Turkey, the country would have acted culturally in a more modest and proper manner. However, discussing the abandonment of dual citizenship for Turks means continuing the deteriorating pattern which will bring about nothing more than injustice.