The NuDay Initiative for the Syrian Refugees in Turkey

While Turkey stepped in with little hesitation, most of us never took the bait and still have not done our part to find ways to build bridges and send relief. But we are filled with hope by Turkey’s example, and are subsequently inspired to continue helping, so that we can build bridges and enjoy how small our world has become. 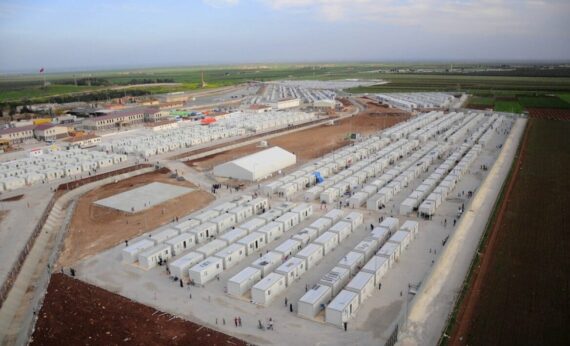 With the start of the Syrian Revolution in March 2011, we have seen the worst of humanity; but, we have also witnessed some of humanity’s best. Since then, we have seen people risk their lives inside Syria so that others can eat and babies stay nourished, actions that are still a daily occurrence and regularly punished by death if the perpetrator is caught. Outside of Syria, the actions of humanity and caring seen in Turkey have encouraged people all over the world to think less about themselves and more about their fellow world citizens.

WorldBy Silan Cecen
Turkey’s humanitarian aid response has been executed with little hesitation, with Turkish citizens stepping forth to help mothers, children and families as Syrian refugees pour into the country in a desperate attempt to escape heartless air shelling, extremist attacks and regime sieges. No other country has opened up its borders as Turkey has, nor has any other country been so vocal about Syrians’ right to live democratically, under a freely elected government in their own homeland.

Turkey’s humanitarian aid response has been executed with little hesitation, with Turkish citizens stepping forth to help mothers, children and families.

Syrians are not strangers to Turkey or to the Turkish people. As a matter of fact, most have Turkish blood running through their veins. Syrians know from history and their own families that the Turkish are a warm, welcoming people who feel richer as they open their hearts and homes to their fleeing Syrian sisters and brothers. This lesson is reflected in the Turkish people today – even when their guests overstay, they are a living example that a welcome is a welcome.

The warmth and caring that Syrian mothers and children have received in Turkey, and the education options made possible for refugee students to be able to continue their university studies are part of why the Syrian youth look forward to their future, instead of becoming stuck in a cycle of resentment, trauma and struggle. They are offered a chance in Turkey, even if their ultimate goals are to become educated and return to Syria to help rebuild their homeland into a country of democracy and freedom.

Our focus in Turkey is on empowerment and education, filling gaps so that we can identify opportunities for Syrian mothers and children.

Syrian mothers in Turkey are navigating the labyrinth of settling down, suppressing their sorrow and trauma, while figuring out ways to provide for their children. Our international NGO NuDay Syria works on supplementing what the Turkish government offers Syrian refugee mothers. Our focus in Turkey is on empowerment and education, filling gaps so that we can identify opportunities for Syrian mothers and children, oftentimes in conjunction with Turkey-sponsored programs.

Mothers of the children in our Turkish Tomer programs often find it difficult and are hesitant to learn how to live in a new country while ‘waiting the crisis out’; therefore, much of what we do is to offer psycho-social support and find ways for the women to earn money through crafts, while keeping their children safe. We love seeing mothers provide for their children by sewing, knitting or even teaching and, in return, being paid Fairtrade wages so that slowly they can build their self-esteem. Empowered, Syrian mothers can safely shelter their families and encourage and support their children as they start school as refugee children in a new country with a different language.

Syrian women’s families in Antakya are often engaged with NuDay Syria’s efforts to reach out, to educate and to help empower mothers, whether it be through our self-sustaining social business project, psycho-social therapy or ensuring that their children’s health and emotional needs are being met. In our dealings with these women’s families, we regularly find tragic examples of youth working to secure food aid and rent for their mothers to pay the family’s bills. These young people will be underpaid or, in severe cases, not paid at all after weeks of work, often working 12-hour shifts. These are young people who need to be in school, continuing their education that is so highly valued both in Syrian and Turkish families. There is no doubt that Turkey is cutting itself short by not enforcing labor laws and fining employers taking advantage of refugee children who need any kind of pay check.

A few years from now, the youth refugees will be adults who have received a top-rate education within the Turkish school system or in a school system like that of NuDay.

Paying Fairtrade wages is a modern-day concept that ensures that people struggling to survive are not taken advantage of by avaricious employers. People in the aid field in Turkey have all heard of cases of young people working for very little money or not being paid after weeks of work. Being unfair and ignoring Turkish laws is neither helpful to refugees nor reflective of the ethics of the Turkish government. However, enough workplace malpractice cases have taken place that it is time to emphasize the illegality of ignoring basic employee rights.

With the ongoing crisis not having a definite end in sight, Turkey wants an educated work force, even if they are Syrian guests who arrived as young people and will grow to adulthood in the host country. A few years from now, the youth refugees will be adults who have received a top-rate education within the Turkish school system or in a school system like that of NuDay Syria, where our efforts are closely aligned with the goals of the Turkish Department of Education. They will not be young adults who lost all access to education, who were taken advantage of in the work place and now have few skills and fierce resentment.

Successfully developed countries historically know that their ticket to enhanced living standards and a progressive work force is education for all residents. As is widely known – either from statistics or intuition – obtaining an education is also a major deterrent to extremism. Education is a fundamental part of the belief system of Islam. In Turkey, attempts to provide education for Syrian refugees have been concerted, but still are lacking. NuDay Syria, like other organizations, runs its own school in southern Turkey. Our NuDay School is not only for elementary and secondary students but also serves as a remedial school and institution for adult integration into the Turkish system.

We are filled with hope by Turkey’s example, and are subsequently inspired to continue helping, so that we can build bridges and enjoy how small our world has become.

Our school is operated in collaboration with the Turkish government, and proudly so, because we believe strongly in refugees being given fair, transparent options to become functioning members of their host country, while retaining pride in their Syrian heritage. In our collaboration, students are able to learn the language, work with students in neighboring Turkish schools and build new futures for their families. Several teachers are Turkish nationals and the rest are Syrian teachers who were previously refugees with very few options.

While the Syrian humanitarian crisis is still catastrophic, non-Syrians and expats find themselves re-committing to be part of the change and to ensure they are part of a movement of support for these mothers and children. What we have learned in the last five years is that, if we wait for others to step up, we will be disappointed. None of us know the extent of suffering these families have endured, but we do know that, from our vantage point, we can make a difference and bring relief.

If we are even more resourceful, then we are not only doing what we can to help, but also are able to empower and ensure a stronger sense of self and survival. While Turkey stepped in with little hesitation, most of us never took the bait and still have not done our part to find ways to build bridges and send relief. But we are filled with hope by Turkey’s example, and are subsequently inspired to continue helping, so that we can build bridges and enjoy how small our world has become.

Nadia Alawa is the Founder and President of a Humanitarian Relief Organization, NuDay – a non-profit organization focused on the empowerment of women in Syria. In 2016 Nadia received the inaugural Humanitarian Award at the James W. Foley Legacy Foundation.