Alaa Qaddum, 5, had dreams that were cut short by an Israeli missile while playing with her friends to the east of Gaza. 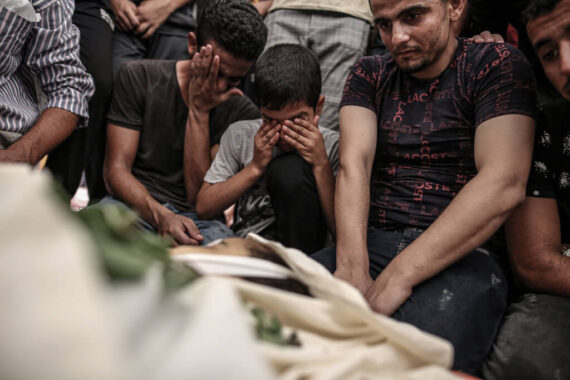 Funeral ceremony held for 10-year-old Palestinian girl Lian Al-Shaer died on Thursday of her injuries from a recent Israeli offensive on the Gaza Strip, in Khan Yunis, Gaza on August 11, 2022. Photo by Ali Jadallah, Anadolu Images

On August 1, Israel launched another military campaign against the Gaza Strip, killing 46 Palestinians, 16 of whom were children, as young as 5 years old, and injuring 365 others. Israel claims that its military campaign only targeted Islamic Jihad, but facts on the ground speak of a different reality.

Since 1948, and especially with the occupation of the Gaza Strip and the West Bank in 1967, Israel has systematically targeted the Palestinian existence. Several massacres against the Gaza Strip took place at the hands of the Israeli army such as the Khan Yunis massacre on November 3, 1956, which claimed the lives of 275 Palestinians, while another massacre in Rafah killed 111 on the same date as the Suez Crisis broke out.

The excuse then was hunting Palestinian fighters during the crisis. More Palestinians were killed before and after as they attempted to return back to their towns and villages in what became Israel. They were called “infiltrators.”

The mere Palestinian existence after the Nakba is in itself a threat to Israel, as many of these Palestinians are refugees who reside a few miles away from what used to be their towns and villages and now under Israeli control. Israel has always sought to keep Palestinians at bay, by any means necessary, be it arrests, assassinations, massacres, or siege. Palestinians always have to be caged because, God forbid, if they are not, they might return back to what became the state of Israel, thus threatening its demographics.

Read: The Latest Gaza-Israel Escalation: How Did It Happen?

That’s why we read in the news every day that an Israeli raid targeted a Palestinian group or city. Israel’s propaganda machine, the Hasbara, promotes the claim that these attacks are individual, and they only target specific groups or cities. The truth is, in Israeli eyes, Palestinians are one, be they in the Gaza Strip, the West Bank, today’s Israel, or in exile. According to this Israeli understanding, Jenin is Gaza, Jerusalem is Hebron, and Nablus is Lod. The demolition of Palestinian houses in Israel or Jerusalem is also part of this Israeli approach.

For the Israeli policy to succeed, all of a sudden, after placing Palestinians under siege for more than 15 years, Israel decided to grant the Palestinians in the Gaza Strip thousands of work permits. The logic behind this is that Israel assumes that the Palestinians in Gaza will not risk losing these permits by engaging in a military confrontation with Tel Aviv, especially given that the majority don’t have an economic alternative and poverty has taken its toll on them.

Stories should count, Not numbers

In the midst of this Israeli madness, and as Israel’s killing machine continues targeting the Palestinians uninterruptedly, we should remember that Palestinians are not merely numbers and victims: Palestinians are a people with a history, families, memories, and dreams. The most recent Israeli offensives on Gaza, Jenin, and Nablus speak of these stories and dreams.

Alaa Qaddum, 5, had dreams that were cut short by an Israeli missile while playing with her friends to the east of Gaza. Her 7-year-old brother and father were injured too.

Ahmed Walid Ahmed al-Farram, 16, was killed by an Israeli air strike, according to Palestinian sources. His father was not able to bid him a final farewell as he couldn’t exit Israel, where he works, due to the closure of crossings leading to Gaza.

Palestinian elder Naa’ma Abuqaida, 62, lost her life as an Israeli airstrike targeted the car she was in on her way to her son’s wedding.

Palestinian Ashraf al-Qaisi, a father of eight, who works as a street vendor, agreed to let his house be demolished in order to make way for rescuers to reach his neighbors who were trapped under rubble. Rescuers couldn’t reach them because of the huge destruction Israeli air strikes caused.

When asked about where he plans to go with his family, al-Qaisi said, “To where people who have lost their houses go.”

The August 2022 escalation in Gaza reminds Palestinians of previous escalations they have experienced, during which they have lost their homes and loved ones. This is once again proof that there is no postwar or post-traumatic phase in Gaza, because wars and trauma are ongoing.

Is the war on Palestine over?

As part of the latest Israeli to keep Palestinians under pressure, the need to wage an ongoing war on their existence by using different means and targeting all Palestinians regardless of where they are emerges. Israeli escalations do not differentiate between one city or another, a man, woman, or political group. All Palestinians, including those in exile, many of whom are denied entry to their homeland, are equally and obsessively viewed as potential threats to Israel.

The war on Palestine is far from being over. It is waged every day and against all Palestinians by using different excuses and means. It requires keeping the rest of Palestinians/cities at bay, including by offering them work permits to buy their silence. By doing so, Israel kills two birds with one stone: exploiting the Palestinians by making them work as cheap laborers and pressuring them not to call for their national rights.

On August 13, reports suggested the Israeli government is considering allowing Palestinians from the Gaza Strip to travel through the Ramon Airport too, as part of a package to allow 20,000 workers from Gaza work in Israel. The Israeli equation is clear: if Palestinians in Gaza remain calm, they will receive some economic bribes on the provision they never talk about their political rights.