The Operation Euphrates Shield: A Joint Military Campaign in a Foreign Land 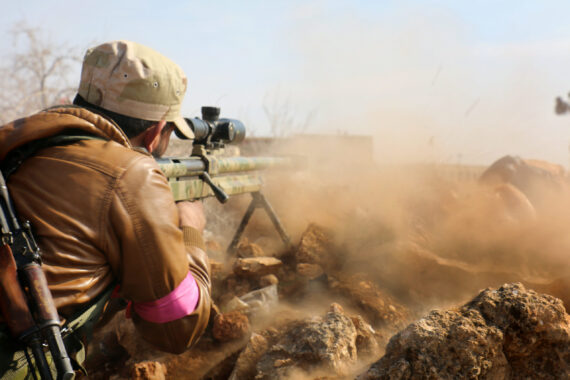 The Operation Euphrates Shield (OES) which was launched on August 24, 2016 in order to clear the presence of terrorist organizations along Turkey’s southern border and to prevent the illegitimate PKK entity in Syria, seems to have reached its major objectives. While Turkey has carried out an intense counter-terrorism campaign at home in recent years, she has also adopted a strategy of eliminating terrorist threats at their roots by increasing military activism abroad. Along with the waves of frequent terrorist attacks in the country, the rapid proliferation of terrorist groups with the exploitation of the civil war in Syria made this strategy shift imperative.

Although it is often claimed that the Turkish Armed Forces (TAF) would face capability problems in case of a military operation in foreign lands due to the discharges after the July 15 coup attempt, the OES was successfully completed on March 30, 2017. The OES, planned and implemented with the concept of Joint Operations, has demonstrated that the TAF has the level of capacity and readiness, capable of dealing with hybrid terrorist threats in foreign lands as well as in urban environments. The fact that the operation was carried out with the Free Syrian Army (FSA), is an experience that further raises the value of the success and makes the OES an exemplifying campaign. However, it is understood that hybrid warfare practices and innovative terrorist tactics encountered in the theatre of war have created some problems for the course of the OES.

During the operation, the biggest threats faced by OES elements were Suicide Vehicle-Born Improvised Explosive Devices (SVBIED) and anti-tank guided missiles (ATGM). A significant number of the martyrs given during the operation was the result of SVBIEDs, and many of the destroyed armored vehicles are of those ATGMs. Particularly in the western and northern parts of al-Bab, the tanks were repeatedly exposed to ATGMs allowing SVBIED attackers to become more able to reach the OES base areas. The fact that suicide attackers instantly had car bombs ready in their present location at the time increased the shocking effect of the threat, exacerbating  the obstruction of the attack.

Smashing the enemy defense lines with the maneuverability and the fire power of the armors and mechanized units was a vital component of the OES. However, the high level of armor losses calls attention to the necessity of a number of regulations and developments in the tactical deployment, use, and handling of tanks in the hybrid warfare environment. On the other hand, due to limited TAF personnel at the beginning of the operation, the armor advances that were heavily dependent on the FSA infantry capacity, has come to a standstill due to the problems originated from the FSA components in adapting to the rapidly developing battle environment. This situation was only improved after the deployment of the Turkish Special Operations Forces (SOF) and Commando Teams to the battlefield at increasing rates. Furthermore, the lack of close air support was felt in many cases, in particular when the armored units were in vulnerable positions against the sudden attacks.

It was observed during the OES that DAESH evaluated the timing factor in the theatre of war. The time slot in question is the period of temporary fragility of the OES elements during deployments in liberated areas immediately after it was captured. In that time slot, which generally came across the early hours of the morning, DAESH resorted to its traditional counter-attacks with raids and hit and runs. SVBIED, guided missile and mortar attacks were followed by the close engagement of small DAESH teams into OES elements. During these raids, it was observed that DAESH provided effective cover for its attacking militants as well as putting pressure on the OES elements by suppressive fire via ZSU-23 Shilka anti-aircraft weapons. DAESH militants also harassed positioned tanks through these weapon systems, aiming tanks to leave their positions and to turn them into open targets for guided missiles. Another significant factor that created difficulties in DAESH counter-attacks was the weather conditions. Particularly the serious fall of visual range due to the dense fog made it inevitably difficult to counter asymmetrical and sudden threats.

The Necessity of Stable Diplomatic Relations

It should be noted that the inability to overcome some diplomatic problems is another critical factor that slowed down the operation. After rapid acquisitions in the early days of the OES, the Manbij became a target of the operation. However, it was forced to halt by the US’s manipulation and intimidation strategy. Afterwards, the OES continued towards the western direction. Another development was that in the time period between the capture of Dabık and the preparation stage for the al-Bab operation, both Syria and Russia created various problems with military threats by means of air forces, which caused the operation tempo to be adversely affected. In the same period, the US-backed YPG/PKK attacked elements of the OES in the vicinity of Mare, rapidly multiplying and complicating instant security threats. The fact that the Russian Air Forces hit Turkish soldiers on the 9th of February shows the seriousness of the whole complexity. Therefore, stable dialogue between interstate relations is a necessity for the military initiatives carried out on thin diplomatic lines.

Through the OES experience, it became clear that counter-terrorism strategies must be population-centric. The reason for this is due to the fact that public acceptance of the OES components was not only essential for the successful completion of the operation but also for its long-term returns. In respect to counter-terrorism, it can be suggested that Turkey has succeeded in the activities of Human Intelligence (HUMINT) during the operation. The most crucial factor that contributed to this success was the support of the local people. While the evaluation of HUMINT during the OES highlights its success, it can be stated that technical intelligence activities should be intensified and surveillance in general should be upgraded to a stronger technological infrastructure.

Military Operation with a Local Partner

By allying with the local opposition groups, Turkey initiated the OES as an alternative model of Joint Operations. Conducting a military operation in a different geography, operating in an environment in which the dominant language is different and variations in socio-cultural dynamics in the region made Turkey more reliant on FSA forces during the operation. While combating hybrid threats, operations with local partners require a number of improvements in terms of motivation and battle performance.

On the tactical and organizational level, an ideal military cooperation that overcomes the principal-agent problem can be achieved through an integrated approach to the concepts of initiative, intelligence, and integration between units and services, leadership, motivated soldiers and learning. However, in these phases, it is inevitable not to encounter structural problems. First of all, local partners participating in the operation may need to conduct patrol and ambush operations outside the garrison and at night, so that an operation against irregular/terrorist elements can be successfully carried out. Disruptions in the implementation of these tasks may slow down the operational tempo and may even cause retreatment of the forces. At this stage, taking into account the components of the FSA forces, it should be noted that the traditional warfare culture of FSA is different from the TAF. In the light of this information, it may be necessary for the FSA forces to be trained at a tactical level regarding the necessities of the battlefield.

Secondly, in areas of complex conflicts like the Syrian Civil War, the advantage of local opposition groups is to have a deep and strategic knowledge of the population and local conditions. However, being deprived of this advantage or reducing it to a minimum can have vital consequences. In order for intelligence regarding the  population and local conditions to be beneficial for the operation, it is important to integrate intelligence gathering as well as analyzing and spreading capabilities and general knowledge of acquired knowledge. However, most of the time, information may not be shared among armed actors formed by the integration of several different groups such as the FSA, and informational disparities between the units may have negative consequences on the scene. In this context, it is necessary to establish a common ground between the commanders and the units to provide trust and information sharing.

Thirdly, in order to ensure complete control and security of an area in the operation, it is necessary for the forces participating in the operation to have the ability to work together. Besides, when unexpected resistance by terrorist elements are detected, reinforcement of forces may turn out to be a necessity. In the case of OES, the FSA forces formed an important part of the offensive force, while the armored units supported the FSA forces. This situation increased the role and significance of the FSA in the operation, as the main offensive force in the elimination of potential anti-tank units targeting armored troops.

On the other hand, the collaboration of commanders with leadership qualities among local partners constitutes a more dynamic coordination of the co-operative forces. From time to time disagreements among the commanders of the components of the FSA, and the suicide attacks of DAESH on these commanders have been one of the major problems affecting the course of the operation during the OES.

Moreover, the disagreement between the local partner and the protecting power may lead to motivation problems. For a long time, Turkey tried to persuade the opposition forces, who perceive the Syrian regime as the primary threat, to fight against DAESH instead of the regime. With the change of this threat perception of the FSA towards DAESH, the integration of the groups with low motivation to the operation posed a trouble in the conduct of the OES.

There is no doubt that tactical training is intended for conventional military operations. However, operations such as the OES, which are conducted with a local partner against irregular/terrorist elements, will require continual learning for conventional and hybrid threat operations, moving beyond high-level skills and standard procedures.