The PKK counts thousands of child soldiers among its ranks of fighters, and they are often forced or coerced into taking up arms. 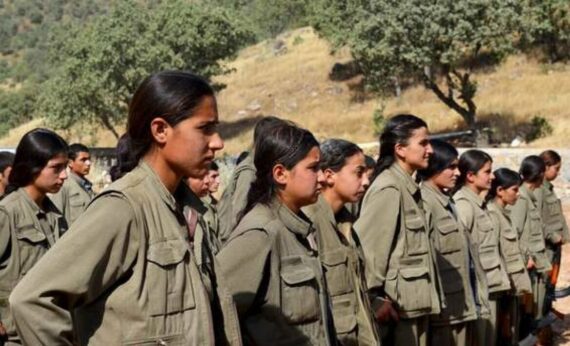 Thousands of child soldiers are used by armed groups in their struggle for power. Some children are abducted from their families, while some others are brainwashed and themselves join these organizations. Regardless of the motive, the end tends to be the same: they kill, they die. The PKK is no exception and like many other armed groups in the world, the PKK is also using children in its terror campaign.

If children make good terrorists and kill, the PKK takes it as an achievement over its enemy, the Turkish state. If they die, then they make good propaganda material for the organization to use against the Turkish state. After all, an image of a war between children with slings and soldiers with tanks gives the PKK the upper hand in its propaganda war if not in the real battle field. While the picture that the PKK wants us to see is the stone throwing kids against the armed vehicles of the Turkish army, there are thousands of other kids who do not only hold little rocks but also machine guns and bombs in their hands (and on their bodies as suicide bombers) in the PKK ranks. This piece will touch upon both kinds of child reserves that the PKK mobilizes for its campaign.It is no secret that the PKK uses children under the age of 18.

Middle EastBy Silan Cecen
The organization does not even try to hide it but is pretty much proud of it. Any pro-PKK documentary film that the PKK allows to be filmed in their camps includes interviews with PKK members, and many of them proudly tell their stories of joining the organization, mostly before the age of 18. Since dead men tell no tales, what we do not see in those documentaries is that many of them lose their lives in the conflicts before they see their 18th birthday. Nevertheless, here we are not only talking about say 17 year old Kurdish boys, but also little kids as young as 9, according to the most recent Human Rights Watch (HRW) report as well as other documented cases in other sources.A recent HRW report has vividly demonstrated the PKK and its Syrian branch PYD’s use of children in their military ranks.
The PKK recruits (and also abducts) children, provides them military training and uses them in its battle against Turkey. HRW documented 29 cases in which the PKK recruited Kurdish and Yezidi children in Northern Iraq and the organization called on the PKK to “categorically denounce the recruitment and use of child soldiers”. In fact, 29 is just a small number compared to the total size of the PKK’s army of children. As a senior HRW researcher indicates, it is just “a drop in the bucket” and the PKK’s child soldiers that the HRW team could reach told them there were “many many many other children with them” in the PKK’s training camps. Estimates of the true size of the PKK’s child soldiers reach as high as over 3,000 excluding the number of children in Turkey that the PKK occasionally uses.http://thenewturkey.org/the-rise-of-secular-radicalization-and-the-pkk/Not to forget, here we are talking about children not as legally defined in domestic law. Many of these children are little kids under 15 and, in some cases, as young as 9 years old girls as mentioned in the HRW report. The age group 15 to 18 requires no specific inquiry because, frankly speaking, this is a big chunk of the PKK’s manpower (in this case, boy- and girlpower).The PKK, as reported by HRW, “abducted or seriously abused children who tried to leave their forces.” Abduction (by threatening the parents or kidnapping children with no notification to the family) is not the only way the PKK recruits children though. The PKK itself operates a number of primary schools in the PYD-ruled Syrian and PKK-ruled Iraqi territories while it often calls parents not to send their kids to the schools in Turkey and even attacks those schools at times.The textbooks in the PKK’s own schools across the border feature the speeches of the PKK’s imprisoned leader Abdullah Öcalan. Kurdish and more recently Yezidi children at those schools are taught to kill and die for the PKK’s fight. In other words, the PKK’s schooling system brainwashes young minds and implants in them a desire to fight and die (to be a PKK martyr) in a very early age. Many families fear that such radically and ideologically loaded curriculums may influence their children in places like the PYD-ruled Rojava cantons, but there is no other choice.

While the PKK seems to be unhappy about reports on its child soldiers carrying bombs or machine guns in its camps in Iraq and Syria, it proudly shows off the children’s “resistance” against the Turkish police in Turkey’s cities. Children were in the front lines in the PKK’s trench war in its attempt to create liberated urban areas in southeast Turkey in the Summer of 2015 as well. As the PKK’s professional forces withdrew from the towns after the defeat, these local children surrendered in tens and the total number of surrendered and captured children reached in the hundreds in less than a few months.

In a nutshell the PKK needs children to kill and die for the organization. They help the PKK both dead and alive. At the end of the day, each child soldier is a soldier for the PKK and can be used against Turkey. If they happen to die in combat, then the PKK aims to gain sympathy over the children’s dead bodies. So, the PKK’s reasoning is pretty clear, it is a win-win game.

But what about the children themselves, why do they join the PKK either as full members or as part-time militants? Well, there is no single answer to that question and individual reasons vary. Some children do, in fact, voluntarily start fighting in the PKK ranks as early as 12 years old. Some others are simply kidnapped or abducted. Some join the PKK together with their family members while some others do not seek parental consent. Some children may start by throwing stones at police as a game, spurned to do so by older people already part of the PKK or sympathetic groups, of course the child’s mother may notice him in the crowd and take him home.

Well, this whole thing is a tricky issue for the Turkish security forces. For one thing, it is not always easy to spot the age of an enemy who is directing a machine gun at them or about to throw a bomb at them. Nevertheless, if the security forces are not in an immediate danger situation, which means that they do not have to act in a few seconds before a bomb drops on them, they have more of a chance to deal with the PKK’s child militants.

At the end of the day, they are children. If you can get the gun from their hands before they pull the trigger or the bomb before they throw it and give a ball instead, they shoot to score rather than kill. Sometimes it is as simple as that as seen in the case of police officer Asum Bulat who repeatedly disarmed stone throwing or tire burning children by passing out bananas or chocolate to the crowd. It gets harder though as bombs start to replace stones.

Sometimes, a 14 year old loses his fingers when a handmade bomb explodes in his hand before he could throw it at the police. Sometimes those handmade bombs burn other people alive. And it gets hardest when a kid is taken from his/her family and goes through ideological and military training in the camps for months. They are taught to kill and die before they could have a chance to live their own lives. Here, it is pointless to try to shame the PKK who have and will continue to use child soldiers no matter what. The cure is somewhere between the baby being born and it growing into a killer. The cure is in care, hope and love as melted in police officer Asum Bulat’s sweet chocolates.