The PKK’s Exploitation of Women: Assumptions vs. Realities

Although listed as a terror group by many Western states and Western-based institutions such as NATO and the European Union, various Western media outlets have paved the way for the PKK and its offshoots to feature in their reports within a positive and overwhelmingly feministic image. 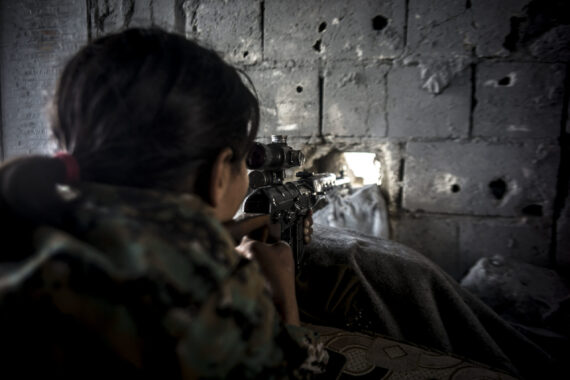 The PKK terror group and all of its offshoots use women not only as suicide bombers, but also as propaganda tools in order to soften their negative images among global audiences. Since the beginning of the Syrian conflict, particularly female members of the PKK have become famous under the mask of their combat against Daesh in northern Syria. Accordingly, even their uniform, for example, became fashionable and were sold by H&M’s clothing retailer chains. At that time, some rumors about female terrorists were also quite sensational – such as male Daesh fighters being afraid to combat the female branch of the PKK, because they believed that those killed by women will go to hell. The Independent covered this story referring to a PKK-affiliated YPG female member. It does not matter whether it is true or not, it became obvious that it was just an ‘interesting’ story to cover for the media, as long as you ignore the bloody face of the PKK.

Although listed as a terror group by many Western states and Western-based institutions such as NATO and the EU, various Western media outlets have paved the way for the PKK and its offshoots to feature in their reports within a positive and overwhelmingly feministic image. It seems that it is not an aimless effort. Rather, it even may be a conscious editorial policy in order to moderate the image of the PKK and the YPG in the eyes of the global media audience and then open the matter of its illegal status to discussion (and reappraisal). Therefore, the PKK has chosen a feminist discourse in an effort to gain more support from the “free world.”

In 2015, for example, alongside many newspapers such as the Guardian, Daily Mail, even the BBC, made numerous reports about YPJ members and their “heroic” fight against Daesh in Syria. As an example, in 2014, the British broadcaster filmed a short documentary titled ‘Who are the female fighters of the PKK?’ and the following year it published a picture gallery headlined ‘PKK fighters prepare for battle with IS.’ While the first one claims that nearly 40% of PKK members are women with a lot of footage showing them singing, smiling and enjoying their lives, the second one focuses on the personal stories of female members. They literally resemble them as if they are at a girl’s school, although the topic in discussion is an organization that has carried out numerous bloody attacks on officials and civilians on European and Turkish soil.

In fact, this made-up image is not new. Under the rule of Abdullah Ocalan, who has been in prison since 1999, the PKK attempted to reinvent itself as ‘a social movement with self-administration at a local level, an alternative type of economy, ecologism and feminism as central pillars.’ In addition, Jenna Krajeski, an Istanbul-based journalist, conducted an interview with Sebahat Tuncel, a politician under investigation due to suspected links with the PKK, who named the group a feminist movement and its leader Ocalan a feminist. Moreover, a New York Times article, dated January 29, 2018, written by Nujin Derik, a female YPG member, again writes about how female members of the YPG were ‘instrumental in the defense of Kobane and the liberation of Raqqa – where a major objective was the freeing of the Yazidi women the jihadists had taken there as slaves.’ However, the other side of the medallion is completely different, as seen in the PKK’s misuse of females and its emotional exploitation of femaleness.

The other side of the medallion

The PKK has carried out suicide attacks through female members in many cases. Zeynep Kinaci is known to be the first instance of the PKK using a pregnant woman as a suicide bomber. She killed six Turkish soldiers on June 30, 1996. A few months later, Leyla Kaplan, while pregnant, triggered explosives at a police department in Adana. She reportedly witnessed beforehand a PKK male commander execute a young woman who had denied to carry out the bombing. In the 1990s, female terrorists had performed 11 of the PKK’s 15 suicide attacks in Turkey. The latest example was on January 28, when Avesta Khabur, a 20-year-old from the YPG’s women unit YPJ, blew herself up targeting a Turkish battle tank and soldiers in Syria’s Afrin. After the attack, her unit called her “a model of free Kurdish women,” likening her to prior female PKK suicide bombers.

It is such a contradiction for a self-proclaimed ‘feministic’ organization to use its women members as suicide bombers, whether they are pregnant or not. This is not just limited to these events. The women have also been abused by male members of the PKK. According to a report by the Interior Ministry of the Republic of Turkey, the PKK regards the family as an institution of the feudal system and Abdullah Ocalan expressed that women shouldn’t be limited to a single male.

Many high-ranking leaders of the group, including Ocalan, sexually abused women who were subsequently executed due to false accusations of being agents. In late 1984 (or early 1985), Saime Askin, a senior female member and harsh critic of sexual abuse in PKK ranks, faced execution in the group’s Lolan camp based in Iraq. Besides, the Report on Trafficking in Persons issued by the U.S. State Department claimed that the YPG, the Syrian wing of the PKK, continues to recruit and use boys and girls, including children under the age of 15. In a similar vein, the Human Rights Watch’s interviews reveal that many children appeared in the YPG’s “youth centers” without the knowledge of their families. Families later found out that their children were forcibly recruited by the YPG. Since 2012, the group has used boys and girls under the age of 18 at checkpoints and bases in the Afrin, Kobane and Jazira cities of Syria.

Apparently, the outlawed PKK uses women not only as suicide bombers but also abuses and even executes them if they oppose the decisions of their so-called “top leaders.”  Furthermore, the organization emotionally exploits ‘femaleness’ by instrumentalizing female members as means of propaganda. Its feminist discourse makes the group in no way innocent, but the female-dominated portrayal of the PKK has already earned sympathy in the Western world. The PKK’s bloody face against the Turkish state, Turkish and Kurdish civilians and even its own members who oppose the group cannot be justified by the media. Shouldn’t the international media take action against these human rights abuses instead of praising them? Doesn’t the indifferent attitude of the media agents, which falsely portray the women in the PKK, mean that they are playing an indirect role in crimes committed by the terrorist organization? These are questions that are worthy of extensive thought.