The post-Kirkuk Operation KRG–Baghdad Relations: The Future Status of Barzani

Although Masoud Barzani remains as president of the KDP and is playing a consultative, though not insignificant role to Nechirvan Barzani, his career as a “national” leader seems to have come to an end. 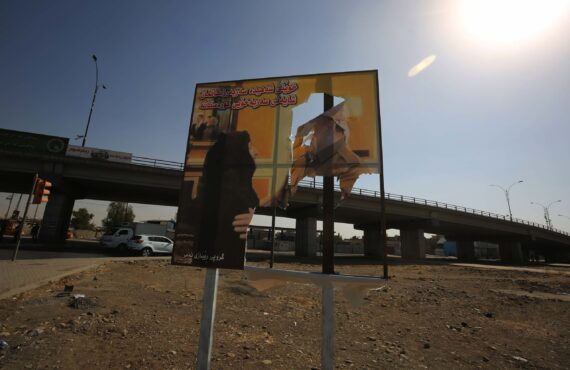 A damaged banner bearing a portrait of Kurdish regional president Massoud Barzani is seen as Iraqi forces advance towards the centre of Kirkuk during an operation against Kurdish fighters on October 16, 2017. AFP

As the dust of the war in Kirkuk and the disputed territories in northern Iraq settle down, there are two issues on the forefront: the future of relations between Erbil and Baghdad, and the future status of Masoud Barzani. It is fair to maintain that the Kirkuk Operation signaled the end of Kurdish independence for decades to come and spelled the demise of Barzani.

The Kurdistan Regional Government (KRG) is likely to remain a weak and divided region, increasingly subservient to Baghdad. With the loss of over 50% of the disputed territories and the majority of its oil fields, combined with the commitment for Iraq’s territorial integrity, as was displayed by the international community during the Kirkuk Operation, Kurdish leaders lost any hope they had for independence in the foreseeable future.

The future of Barzani in KRG politics

Masoud Barzani was elected as president of the KRG in the 2009 general election. His term was extended in 2013 through a political arrangement made between the Patriotic Union of Kurdistan (PUK) and the Kurdistan Democratic Party (KDP). On August 19, 2015, his presidency expired and this led to a crisis of legitimacy and mass protests, which were led by the Gorran movement. During the campaign for the referendum, Barzani repeatedly asserted that he will not run for presidency, and that accepting to be president of the KRG was the biggest mistake of his life – apparently Barzani thinks he is too important to occupy a position which was like being a governor of three provinces.

Though late, Barzani seems to have realized that being leader of the KRG automatically puts him in a hierarchically minor position vis-à-vis the Baghdad government. Following the losses inflicted on the KRG during the Kirkuk Operation, fingers were internally and externally pointed at Barzani as he was held responsible for the Peshmarga’s major defeat.

Moreover, officials in Baghdad and abroad, the US in particular, sent the KRG unfailing messages of possible repercussions of the referendum, which were single-handedly carried out in spite of objections raised by the international community. Thus, he gambled and lost more than what he estimated.

Having heard the message clear and loud, on October 29 Barzani sent a letter to the KRG parliament in which he requested for his powers to be delegated between the government and parliament. It is noteworthy that on October 24 Kurdish lawmakers voted overwhelmingly to extend the current term of the parliament for eight more months to be followed by an election. In his resignation speech, Barzani vigorously defended his decision to hold the September 25 referendum. He stated: “The results can never be erased… the Iraqi attack on Kirkuk and other Kurdish held territory vindicated my position that Baghdad no longer believed in federalism and instead wanted to curtail Kurdish rights.”

Following his resignation, Barzani has repeatedly stated that he will stay fighting as “an ordinary Peshmarga.” On November 1, 2017, he toured Peshmarga forces on the new frontiers, separating them from Iraqi troops and Shiite militias near Fishhabur in Dohuk and Makhmour in Mosul.

Political analysts anticipate that Barzani will remain leading KRG politics from behind the scenes for several reasons. In his letter to the KRG parliament, while Barzani did not admit defeat or apologize, he requested for his nephew and son-in-law Nechirvan Barzani, the ongoing prime minister of the KRG, to lead the country out of the current crisis. Nechirvan Barzani does not have the personal caliber to stand to Barzani. While the Barzani dynasty is formed on the basis of a religious hierarchical order where the orders of the elders are strictly obeyed, his close aides are not at pain to conceal this reality. “Barzani will stay in Kurdish politics and lead the high political council, but on Nov. 1st he will no longer be president of the region,” Hemin Hawrami, a senior advisor of Barzani stated. Umed Khoshnaw, head of the KDP group in the KRG parliament stated that the resignation of Barzani will give him “more time to play a bigger role in supporting Peshmarga efforts to defend Kurdish rights,” and that “he will stay to be the only person capable of guaranteeing Kurdish rights and the unifying element of Kurdish society.”

The Abadi factor in future relations between Baghdad and Erbil

Following the success of the Iraqi forces, the Baghdad administration re-negated from earlier agreements they made with PUK officials for a joint administration in Kirkuk and in other disputed territories. Qasem Soleimani, the commander of the Iranian Revolutionary Guard Quds Corp, who planned and executed the Kirkuk Operation (October 16-20, 2017), had made a secret deal with leading members of the PUK in order to divide and eventually overrun the KRG. Should the plan realize, it will lead to the formation of a new region in Sulaymaniyah and Halabja.

Other than departing from the arrangements made, Abadi issued decrees in order to try officials who participated in the independence referendum. Thus, sixteen Kurdish law makers are currently facing trial in Iraqi courts. The central government is now planning to send 221 employees to the KRG in order to monitor airplanes and crossing gates in the region. Moreover, the Baghdad government is trying to force the KRG to hand over its remaining oilfields, tax incomes and other internal incomes in exchange for sending some KRG employees their salaries. Besides, Abadi has requested for all border points and airports, which have initially remained under KRG control, to be surrendered to the Federal authorities. Finally, the prime minister has also insisted for the KRG military and security forces to be downsized and for the surrender of their heavy weapons to Baghdad. However, Kurdish authorities have not, and most probably will not, accept downsizing the number of Peshmarga forces or surrender weapons, as they do not trust the Baghdad administration. It is also significant to note here that the number of Kurds and Sunni Arabs in the Iraqi federal army and security forces have been decreased to less than 7 percent.

On October 20, 2017, the US called for direct negotiations between Baghdad and Erbil in order to deescalate the fighting. Prior to this, the KRG had already welcomed Abadi’s initiative for dialogue between the two parties, and had requested for the international community to help start such talks. However, just after the call from the US, an Iraqi court issued a decree to arrest Kosrat Rasul Ali, PUK’s acting General Secretary and the Deputy President of the KRG, on the ground that statements he made were provocative and against the safety of the Iraqi army. Kosrat had stated that the entrance of Shiite militias into disputed territories during the Kirkuk operation was an occupation and was the result of internal treason within the PUK.

In addition to the decree issued to arrest Ali, Abadi emphasized that negotiations will only take place between Baghdad and Erbil if the latter declare the referendum results null and void. More, the Iraqi prime minister asked for the surrender of all the international crossing gates, which the KRG still controls. It is worth noting here that the KRG leadership could not afford to conform to such a request. However, on 25 October, Masoud Barzani issued an order freezing the results of the referendum and expressed readiness to negotiate with Baghdad on the basis of the constitution. Therefore, on 20 November Iraq’s Federal Supreme Court declared that the Kurdish independence referendum “was unconstitutional and the results void.” This further strengthened Baghdad’s hand in a stand-off with the KRG.

Abadi welcomed the court ruling and called on Kurdish authorities to respect the constitution. His government described the court decision as “further vindication” of its “constitutional position.” While the KRG under Nechirvan Barzani has not declared whether they will accept or reject the ruling, N. Barzani himself has condemned the process, claiming that the court made its decision “unilaterally and without the presence of Kurdish representatives.” In addition, Masoud Barzani described the Federal court’s decision as biased and politically motivated.

In spite of all developments, the US and EU member states maintain their pressure on Abadi in order to begin negotiations with the N. Barzani administration and for the end to any further military operations. On November 24, 2017, the Iraqi government prevented a planned visit of the German Foreign Minister to Erbil. This caused Germany to cancel the visit to Iraq.

It can be argued that there are two distinct reasons for why Abadi is maintaining a firm stand on the KRG: firstly, Abadi is concerned that he may be perceived as too soft on the issue of Kurdish separatism and secondly, in preparation for the national elections in May 2018, the prime minister plans to run on a separate platform from that of an al-Maliki’s State of Law bloc, which he currently belongs to. Nevertheless, he is also well aware of the existing fragile and vulnerable political condition of the KRG, which has been brought about by the Kirkuk Operation.

Although Masoud Barzani remains as president of the KDP and is playing a consultative, though not insignificant role to Nechirvan Barzani, his career as a “national” leader seems to have come to an end. Thus, as Abadi continues to build his authority in the country, relations between the Baghdad and KRG administrations have entered a new era in which the semi-independent status of the KRG has become something of the past. The much spoken about Kurdish ascendance in the Middle East has inevitably proved to be a mirage.