Trump, in his attempt to undermine China’s hegemony in the Asia Pacific, is harming the Western alliance. Due to these reasons, policies adopted by the U.S. and China, dubbed G7 countries, and being the principal actors of the global order, may trigger many-faceted trade wars in the following period. 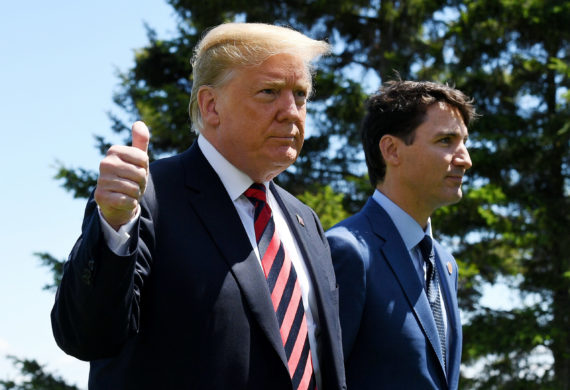 President Donald Trump (L) gives a thumbs up to the media as he is greeted by Prime Minister of Canada Justin Trudeau during the G7 official welcome at Le Manoir Richelieu on day one of the G7 meeting on June 8, 2018 in Quebec City, Canada. Leon Neal/Getty Images

Behaviors of U.S. President Donald Trump occupied the 44th G7 summit held in Canada this year, which had a distinct atmosphere compared to previous summits held every year. Trump’s uncompromising attitude and his announcement regarding U.S. withdrawal from the Paris Climate Agreement, which he made during the summit in Italy last year, have led some to argue that the G7 is effectively becoming a G6.

One should note that several decisions made by President Trump, such as withdrawing from the Trans-Pacific Partnership (TPP), the Paris Climate Agreement and the nuclear agreement with Iran (JCPOA), opening NAFTA for renegotiation, putting negotiations regarding the Transatlantic Trade and Investment Partnership (TTIP) on hold and recognizing Jerusalem as the capital of Israel has led to deep differences of opinion between the U.S. and other G7 countries. In addition, his recent statement regarding the fact that his policy of imposing a 25% tariff rate on imported steel and 10% tariff on imported aluminum would include the European Union, Canada and Mexico by June 1, 2018, has been met with great reaction and anxiety among the Western allies of the U.S. Following this decision, which would affect the current balance of international trade, the rest of the G7 countries tried to persuade the U.S. administration to abandon this policy in order to avoid disrupting the liberal economic order.

As a reaction to Trump’s policies, 29 ambassadors from the EU sent an open letter to the president on the first day of the summit. The letter stated that the trade and investment relationships between the U.S. and the EU have been a win-win for both parties for years; the U.S. has benefited from its trade with the EU more than anyone else. Furthermore, the letter suggested to cooperate against China. Prior to the G7 leaders’ summit, the finance ministers of the six-member countries also repeated the call to withdraw tariffs. Thus, the main subject during the G7 summit was the heavy tariffs imposed on steel and aluminum by the U.S. President.

During the summit, Canada, the biggest trade partner of the U.S., made several attempts to resolve the situation to no avail. With close inspection, one can see that Canada exports an important amount of steel and by itself provides over 50% of U.S. aluminum imports. Attempts to open negotiations made by the Canadian Prime Minister led to heated exchanges between the U.S. and Canada. After Trump’s accusation of “backstabbing,” several high-ranking U.S. bureaucrats also targeted Trudeau with heavy accusations and criticisms. Trudeau, accused of being unfair by Trump, stressed the fact that Canadian workers, just like American workers, needed to be protected, and reminded Trump that he ought to be a fair-trade partner. Following his press conference with Trump, Trudeau stated that Canada will also impose new tariffs on July 1 in retaliation to the U.S., signaling that the protectionist policies of the Trump administration will not go without response.

Western allies, who had hoped to persuade Trump during this year’s summit, failed to achieve any progress and the summit revealed the fractured state of the western bloc. The fact that the other six countries of the G7 cooperated against the U.S. and made joint announcement signifies that the trade war sparked by Trump will not be one-sided. While such a trade war in a situation where countries compete against each other will not have any winners, it has the potential to cause a global recession and to negatively impact the prosperity of the world.

When we take a look at the statistics of trade between the G7 countries, an interesting picture emerges. More than one third of the U.S. $568 billion trade deficit as of 2017 was due to its trade with G7 countries. The fact that the U.S. is running trade deficits with all G7 member countries except from the United Kingdom provides important context for the merchant attitude displayed by Trump during the summit.

The Shanghai Cooperation Organisation (SCO): A new organization versus a divided G7

The protectionist policies adopted by Trump are hurting Asian countries as much as they are western countries. Following the election, the Trump administration focused on competition with China and forced the Western world to act in cooperation. Stating that allies who do not act in accordance of this particular vision should not count on the U.S. for further support, Trump has illustrated that the U.S. is aiming for a bilateral competition with China, and that the U.S. no longer wants to finance the liberal world. Trump’s “Russia should’ve been here” statement during the G7and his tweets following his early departure were highlights of the event. Some even claimed that Trump’s behavior is aimed at destroying the Western alliance.

The fact that on the same day of the G7 summit another summit was being held on the other side of the Atlantic by the Shanghai Cooperation Organization supports this theory. With messages promoting cooperation and unity at a time when Western allies are bickering among themselves for economic gain, the SCO – which claims to be an alternative bloc to the West – signaled to the world that a new center of power now exists. Putin’s emphasis on the rising economic power of the SCO especially drew attention. In reference to the SCO’s combined economic power – over $15 trillion – which totals to 20% of the world economy, the Russian President claimed that the SCO is stronger than the G7 in terms of purchasing power parity. One can appreciate how bright the future of the SCO compared to the G7 by noting that China and India – the two fastest growing economies in the world – will account for 40% of the global GDP growth in the next 10 years. While undoubtedly, this organization should not be expected to succeed in the immediate future, its claim of being an alternative to the Western alliance should not be underestimated. In opposition to the West, which is experiencing clashes of economic interest, the internal harmony displayed by the SCO illustrates that it is a new focus of power.

Deepening divisions among the West and the Rise of Asia

The G7 summit ended tensely after heavy criticisms directed to Canada by the U.S. President and his decision not to sign the joint statement at the end of the summit. The disagreements on trade not only failed to be resolved during the summit, but even grew tenser. President Trump and his advisors, following neo-mercantilist policies, state at every given opportunity that they will put their national interests first, disregarding international norms and thus following protectionist and one-sided approaches. Similarly, the Trump administration does not hesitate to repeatedly declare that they do not want to finance the liberal global order. Therefore, the grounds that justify the superiority of the U.S. in the current global order are now being debated more than ever. Trade wars seem inevitable in a global atmosphere such as this, where political balances are shifting profoundly. If other countries were to react in cooperation to Trump’s continued protectionist policies, this would be met with great anxiety in the global economy and the implementation of such reactionary policies may cause trade wars on a global scale.

On the other hand, the U.S., while adopting more aggressive policies after the incredible economic rise of China, is also shifting its military presence to the Asia Pacific, and is adopting protectionist policies in order to maintain its economic superiority in the global arena. Trump is acting destructively in his economic and political relations with the West. However, he is more constructive and cooperative when it comes to relationships with Asia. Within this framework, it’s important to note that Trump left the G7 summit early to meet with North Korean leader Kim Jong-Un. So, Trump, in his attempt to undermine China’s hegemony in the Asia Pacific, is harming the Western alliance. The policies that the two leading global actors such as the U.S. and China – who have become referred to as the G2 – will implement against each other, can trigger multifaceted trade wars.