It is obvious that Mohammad bin Salman’s Saudi Arabia will continue to become an active and interventionist regional player with strong support from international actors. The country will also continue to employ hard power capabilities in partnership with its regional allies such as the UAE, Egypt and Israel. 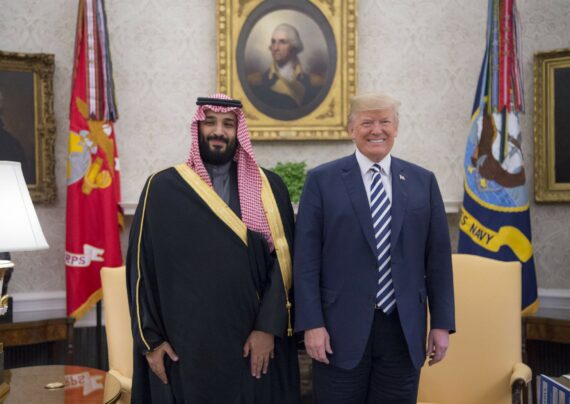 For many years, Saudi Arabia has followed a passive foreign policy under the security umbrella of the United States. The Arab revolutions, however, changed this traditional foreign policy attitude of the Saudi regime. This situation became more visible especially after Selman bin Abdelaziz’s rise to power in 2015. The latest sign of this transformation is Saudi Crown Prince Mohammed bin Salman’s (MbS) month-long tour to Egypt, the U.K., U.S., and France.

During the past year, MbS was busy with eliminating domestic actors that could potentially pose a threat to his power. Following his appointment on June 21, 2017, as Crown Prince, MbS became the most influential actor in Saudi politics. As part of this objective, in September 2017, MbS ordered the arrest of about 30 religious scholars who could become an obstacleto his planned reforms. A similar process was applied to the powerful political and business actors in the country. In November 2017, at least 500 princes, bureaucrats andbusinessmen were taken into custody at the Ritz-Carlton hotel in Riyadh. Following these operations, MbS made it clear to all parties that he is the most powerful actor in the country.

In the following period, MbS began to focus on foreign policy, which is another instrument that he employs in order to strengthen his rule. His first visit as Crown Prince was scheduled to Egypt, the country that depended on Saudi cash flow in the post-2013 military coup. During the visit, MbS mainly gave symbolic messages. He visited the leader of the Coptic Church Pope Shenouda III and attended a theatre performance at Cairo Opera House. Another symbolic importance of the visit was the decision of Egypt’s High Court that had given the final approval to transfer the Tiran and Sanafir Islands to Saudi Arabia. Finally, MbSand Egyptian leader Abdalfattah Al-Sisi also agreed on a new $16 billion investment fund that would help boost bilateral trade and investment.

During his second trip, MbS visited Britain and sought to garner support from political actors in the U.K. MbS continued to expand his cooperation with British partners as both countries signed agreements worth billions of U.S. dollars. In one such agreement, Saudi Arabia ordered 48 Typhoon war jets worth about $10 billion from Great Britain. Bin Salman was also welcomed by Queen Elizabeth at Buckingham Palace.

MbS’s next visit was to the U.S., where he spent 3 weeks. During his stay, Bin Salman met with several senior officials, most notably U.S. President Donald Trump, and also met with leading actors in political circles, the business community, media and civil society.

The first objective of this visit can be stated as developing cooperation between Riyadh and Washington. This was especially observed during the press release that Trump made with Bin Salman. Trump shared pictures of 12.5 billion dollars worth aircraft and other defense industry products that were ordered by Saudi Arabia. He proudly emphasized that due to these orders, thousands of people in the U.S. will keep their jobs. This attitude of Trump was interpreted as his perception of Saudi Arabia as a “cash machine” rather than a strategic ally.

Another important reason for MbS’s visit can be stated as improving the negative image of his country, especially in the eyes of the U.S. public. During the past couple of years, the Saudi leadership has tried to change this perception, particularly on the international level. MbS initiated further reforms that would help to create a better image for the country throughout the world. MbS also hinted that the Saudi regime would distance itself from the Wahhabi ideology as the Crown Prince confessed that the U.S. initiated the idea of Wahhabism during the Cold War in order to block Socialist ideology from spreading across the region.

The final dimension of MbS’s visit to the U.S. is the economy. With its petroleum-based economy, Riyadh aimed at diversifying its economic landscape. For this reason, it is of great importance for the Saudi regime to welcome investors that can contribute to the economic well being of the Kingdom. In order to discuss business opportunities, bin Salman met with prominent business and media figures such as Michael Bloomberg, Bill Gates, Masayoshi Son, Elon Musk, Thomas Friedman, Rupert Murdoch and Henry Kissinger. Another group which Mohammad bin Salman visited was the Israeli lobby in the U.S. MbS met with the representatives of the most powerful Israeli lobby organizations such as AIPAC, Anti-Defamation League, and the American Jewish Committee. These meetings can be interpreted as Saudi Arabia’s commitment to establishing strong relations with Israel in both regional and global politics.

Mohammad bin Salman’s final visit was to France where he met with President Emmanuel Macron. Both politicians announced the strategic partnership between the two countries.

It is obvious that Mohammad bin Salman’s Saudi Arabia will continue to become an active and interventionist regional player with strong support from international actors. The country will also continue to employ hard power capabilities in partnership with its regional allies such as the UAE, Egypt and Israel. This process will further accelerate with the rise of Mohammad bin Salman to the top position in the country, a process that will most probably be completed in the near future.