The Status of the July 15 Coup Trials

Conducted by the Ankara 17th Heavy Penal Court and known to the public as "the July 15 coup attempt lawsuit" or "General Staff main lawsuit", the first hearing of the case commenced on May 22. 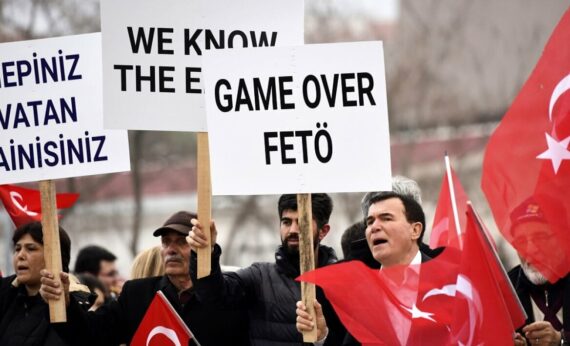 Conducted by the Ankara 17th Heavy Penal Court and known to the public as “the July 15 coup attempt lawsuit” or “General Staff main lawsuit”, the first hearing of the case commenced on May 22. Defendants’ defenses are being heard in subsequent sessions. Similarly, “the main coup trials” were commenced in Istanbul on May 29. As the defense was covered by the media, Chief of Staff Hulusi Akar submitted a statement to the Parliament’s Coup Inquiry Commission, and the National Intelligence Organization’s (MİT) revealed the July 15 Coup Report to the public, making it the hottest topic of June.

Meanwhile, Parliament’s Coup Inquiry Commission also revealed its report and the main opposition Republican People’s Party (CHP) prepared a 300 page long comment on the said report. While the CHP doesn’t clearly contest the idea that the coup was perpetrated by FETÖ, the main opposition party continued to allege that “the July 15 coup attempt was a foreseen, but an unavoidable coup that was controlled for an outcome.” Considering that the trials are at full throttle and the anniversary of the coup is drawing closer, it could easily be said that these discussions will become increasingly heated.

The Fight against FETÖ/PDY after July 15

Before talking about the course of cases and the prominent parts of indictments and defenses, it would be more beneficial to provide some information about the judiciary’s fight against FETÖ/PDY and the July 15 coup attempt. Firstly, it should be noted that the judicial process and trials against FETÖ/PDY had commenced prior to July 15. A day before the coup attempt, the joint indictment was completed and was accepted by the Ankara Heavy Penal Court. Moreover, new cases against FETÖ/PDY were opened in almost all cities and districts of Turkey.

Although the figures change by the day, according to the statement of Minister of Justice Bekir Bozdağ, today more than 160,000 people are part of these trials; 50,402 of them have been arrested, while 47,136 people were released under judicial control. 7,963 people were first detained and later were released. Civil servants like judges, prosecutors, military personnel and police officers constitute the majority of those who are arrested.

Besides these court cases against FETÖ, there are numerous cases and inquiries directly concerning the July 15 coup attempt. Among these cases, the most prominent one is the class action lawsuit against 221 suspects, including some members of the Peace at Home Council, on the events that took place at the General Staff Compound in Ankara. On the other hand, the case on the events which transpired at the Akıncı Airbase, the case on the attempted assassination of President Erdoğan in Muğla, and the case on the coup in Istanbul are other prominent class action lawsuits related to the coup attempt. There are also separate cases opened for each individual incident in cities like Ankara, Istanbul, Malatya, Diyarbakır, Sakarya, Kars, Ardahan, Edirne, Kocaeli, Manisa, Isparta and Şırnak. Therefore, the cases on the coup and FETÖ/PDY are being conducted simultaneously from two channels.

The indictments and evidence of prominent court cases in Ankara and Istanbul came to be known by the public and defendants’ defenses are being covered by the media. Considering the investigations and the court cases, it can be said that the judiciary is conducting challenging lawsuits with a superhuman effort. The challenge is twofold; while FETÖ/PDY’s emphasis on secrecy is one side of the problem, the other is the loss of personnel in the judiciary following the July 15 coup attempt. Almost one third of judges and prosecutors, amounting to around 4,000, were discharged from duty. Despite the gap and the lack in the numbers of senior judges and an ever-increasing work load, the judiciary’s handling of the process is above the standard.

It should be said that the general structure of FETÖ/PDY, their organization within the Turkish Armed Forces and all phases of the coup attempt, along with the perpetrators and their crimes, are mostly identified and clarified. Moreover, some cases are being concluded by now. The first lawsuit to be concluded in Ankara was of the Secretary-General of President Fahri Kasırga’s abduction and the suspect of this case were punished with an aggravated life imprisonment on June 15. On May 27, the first acquittal decision was given in Adıyaman; however, it should be expressed that the Court of Cassation is yet to approve both of these lawsuits.

Regarding the defense strategy, the suspects are acting in unison with a common narrative. Unlike any normal defendants, they are not only trying to save themselves; they are also trying to convey some sort of messages to other FETÖ members and both to the domestic and international public. They are conveying the message that FETÖ members are yet to be deciphered and they are still alive and kicking. They are trying to erase the traces of FETÖ and consolidate the opinion that it was a controlled coup. To achieve their goals, they are rejecting every accusation, with the exception of a few defendants, despite the findings and evidence. Secondly, they are refraining from accusing others. Lastly, they are refraining from mentioning FETÖ as the perpetrator of the coup.

All of the defendants are talking about their past services to the Turkish Armed Forces and their successes, drawing analogies to Ergenekon and Sledgehammer defendants who were victimized by FETÖ and trying to tap into the sympathy that is felt towards the victimized military personnel. Moreover, they are claiming that they aren’t FETÖ members; they are even alleging that they have fought against FETÖ for many years and were victimized by the organization in the past.

Despite being in the middle of the coup, they are refraining from accusing other suspects, and claiming that they have no information about who conducted the coup attempt or implying that the high-ranking officers of the Turkish Armed Forces were behind the coup attempt. Even though rejecting all claims may be considered as a natural reflex, their efforts to save other suspects and whitewash FETÖ are definitely unnatural. Furthermore, there is an impression that the suspects are forming groups and are trying to play certain roles. The common narrative itself indicates the existence of a prepared and orderly organization. Similarly, their leniency to deception and deceit through the distorted understanding of taqiyya also points out the involvement of FETÖ.

Those who are members of the Peace at Home Council and were active in the conducting of the coup are seen to be rejecting physical evidence such as clear recordings, witness testimonies and their confessions at the prosecutors’ office, ridiculing the court itself. Commander of the Akıncı Airbase Hakan Evrim, who was at the base where aircraft lifted off and landed for hours and who saluted FETÖ’s civilian imam Kemal Batmaz, alleges that there wasn’t a coup attempt and that he is not a FETÖ member. Similarly, Sinan Sürer, who fired on civilians entering the General Staff Compound, used ByLock and participated in the coup preparation meetings led by Adil Öksüz, rejects all claims despite recordings and hard evidence, even alleging that the gun he was holding was actually a phone. Former Staff Colonel Doğan Öztürk, on the other hand, asserts that he never saw Deputy Chief of Staff Yaşar Güler on the night of coup, even though he was recorded by security cameras while escorting Güler to the headquarters. There are many other defenses that are in the same vein as these.

It could be said that the main aims of these defenses are to whitewash FETÖ and to consolidate the notion that the coup was actually a ploy or it was a controlled coup attempt. It is clear that they are trying to create a perception in accordance with Fetullah Gülen’s previous claims about the coup. For this reason, they are making statements which accuse high-ranking military officers and the MİT.

With the condition of protecting the rights of defense and fair trial, FETÖ suspects should be barred from managing the judicial process and the public perception. Taking the sensitivities of the public, families of martyrs and veterans into consideration, the suspects must be prevented from showing off; however, legal errors that might cast a shadow on the trials and bring about Turkey’s condemnation at the European Court of Human Rights must be averted. Prejudiced circles and existent negative public opinion should be granted no quarter in this matter.