The Trump Effect on Turkey-Germany relations

Even though Germany’s recent positive position regarding Turkey is based rather on economic interests and short-term goals, which are also based on President Trump's personal and similar negative attitudes against Germany, relations between Turkey and German might mutually benefit from this current situation. 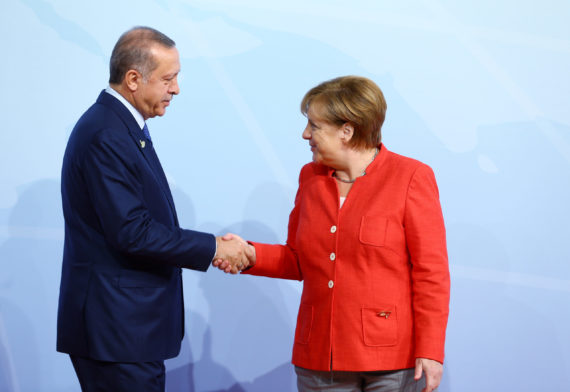 It seems that the dispute over a detained U.S. pastor between Turkey and the U.S. has triggered new dynamics in Turkey’s relations with leading EU states, above all with Germany. As Burhanettin Duran recently addressed, “The Trump administration’s policy of economic selfishness … encourages the world’s leading economies to work more closely together. The U.S. decision to weaponize the dollar and customs compels them to form a common line of defense in international trade. … At the end of the day, the Russian, Chinese, German or French support for Turkey in the face of U.S. sanctions wasn’t just about the potential problems that they would face if the Turkish economy suffers a crisis.”

By looking at the last week, it wouldn’t be wrong to say that reactions from German officials were in compliance with these statements. For instance, members of Germany’s coalition government made some positive comments regarding Turkey-Germany relations in order to stress the country’s stance with regard to Trump’s irrational sanctioning steps against Turkey. In addition, Turkey’s President Recep Tayyip Erdogan and Germany’s Chancellor Angela Merkel had a telephone call in which both leaders discussed the current developments as well as regional issues, such as the situation in Syria. While the Turkish and German leaders pledged their determination to strengthen relations between the two states, some details regarding President Erdogan’s planned visit to Berlin in September were also addressed.

Even before the phone call, Chancellor Merkel clearly stated that “Nobody has an interest in an economic destabilization in Turkey” while adding that “Germany would like to see an economically prosperous Turkey. This is in our interest.” It has also to be mentioned that Germany’s Economy Minister Peter Altmaier (CDU), who is one of the closest politicians to Chancellor Merkel, was one of the first European officials opposing Trump’s tariff policy on Turkey. Altmaier explained, “This trade war slows down and destroys economic growth and produces new uncertainties.” While Altmaier also emphasized that Germany is willing to keep good economic relations with Turkey he stated, “Turkey stands for security and reliability in Europe. We are working together well with Ankara in terms of migration.”

A similar positive step came from the junior coalition partner, the Social Democrats. Besides Foreign Minister Heiko Maas (SPD), the party’s chairperson Andrea Nahles stated in an interview on Sunday that Germany could help Turkey should it become necessary. According to Nahles, despite the possibility whether her predictions became true or not, “A situation could arise in which Germany must help Turkey, regardless of the political discrepancies with President Erdogan.” While she also stressed that it is in everyone’s interest that Turkey remains economically stable and that currency turbulence is curtailed, it is also crucial for her to keep up dialogue on all levels with Turkey, which is a member of NATO and part of Europe.

In addition, some publicly funded German media outlets, which are generally and unfortunately known for their biased broadcasting in the case of Turkey, published some news, in which a rather neutral –or even pro-Turkey– media language and stance has been observed — this was surprising but was also an understandable step due to the current political conjuncture. However, many German media outlets, commentators and columnists, on the other hand, still preferred nearly similar arguments, stating that the Turkish economy is in a very bad situation and accusing the country’s President. In most of these articles, a known language regarding Turkey has been preferred. Without going into detail, one might just mention, that those pieces generally include one-side criticisms while disregarding the U.S.’ role and the contextual impacts.

Nevertheless, it seems obvious that despite certain opposition politicians and known media representatives’ biased perspectives, the German government’s recent steps can be elaborated as rational ones in order to achieve some –in particular economic– objectives. This, with no doubt, aims an improvement of relations between Turkey and Germany – on both sides. Thus, under these circumstances it is also no surprise that, for instance, the German government’s Commissioner for Tourism and Parliamentary State Secretary, recently promoted travel to Turkey by stating that “there is no reason not to go on holiday” to Turkey.

It’s obvious that Germany’s federal government does not have any interest in supporting the U.S. President’s sanctions against Turkey. Even though Germany’s recent positive position regarding Turkey is based rather on economic interests and short-term goals, which are also based on President Trump’s personal and similar negative attitudes against Germany, relations between Turkey and German might mutually benefit from this current situation. Above all, in regard to the Turkish President’s planned visit on 28/29 September to Germany, some additional steps in order to intensify the mutual confidence might be advantageous for both countries – also in fields other than economics.