The U.S. withdrawal of combat missions from Iraq will not stop drone and rocket attacks by the Shiite militias on U.S. diplomatic facilities and bases hosting the U.S.-led coalition troops in Iraq. 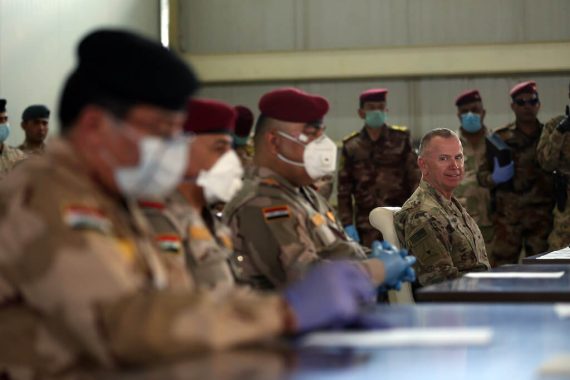 Coalition’s Brigadier Gen. Vincent Barker (R) attends the handover ceremony of the K1 Air Base to the Iraqi Army from US-led coalition in Kirkuk, Iraq on March 29, 2020. Photo by Murtadha Al-Sudani. Anadolu Images

In January 2020, a military strike by the United States assassinated Qasem Soleimani, the former commander of the elite Quds Force of the Islamic Revolutionary Guard Corps, and Abu Mahdi al-Muhandis, then deputy head of an Iraqi paramilitary organization known as the Popular Mobilization Forces (PMU).

The assassination increased not only the escalation between the U.S. and Iran-linked Shiite militias, but it also enabled the Iraqi parliament to request then Iraqi prime minister Adel Abdul Mahdi to end foreign military presence in Iraq. Correspondingly, Shiite militias carried out a total of nearly 100 attacks on U.S. diplomatic facilities and bases hosting  U.S.-led coalition troops in Iraq, compelling the U.S. to reconsider its combat mission in Iraq.

At first, the attacks on the U.S. diplomatic facilities and bases forced the U.S. to downsize its military mission in Iraq. Accordingly, the U.S. withdrew approximately half of its 5,000 forces from Iraq in 2020. The majority of the remaining forces serve as advisers to Iraq’s military. The U.S.-led coalition handed over eight bases to the Iraqi military last year and pulled international troops back to larger garrisons such as Camp Taji, Erbil, and Ain al-Asad airbases.

Read: Contractors and Mercenaries will Live on after the US Leaves Iraq and Afghanistan

Meanwhile, Iraqi Prime Minister Mustafa al-Kadhimi has been facing pressure from Iraqi Shia factions in the country and militias allied with Iran to implement the Iraqi parliament’s nonbinding decision to end foreign military presence in Iraq. Al-Kadhimi has strived to reduce coalition combat forces, and instead to increase NATO’s role in Iraq, where in 2018 he invited some 500 NATO personnel to raise Iraqi military and security competencies during Iraq’s strategic dialogue with the U.S.

The U.S. withdrawal of combat missions from Iraq will not stop drone and rocket attacks by the Shiite militias on U.S. diplomatic facilities and bases hosting the U.S.-led coalition troops in Iraq.

On the one hand, the strategic dialogue meetings have resulted in reducing the U.S.-led combat mission against DAESH in Iraq, the majority of whom are American soldiers, by 60 percent. On the other hand, NATO agreed to expand its military consultation mission in Iraq to roughly 4,000 troops.

Moreover, Josep Borrell, high representative of the European Union for foreign affairs and security policy and vice-president of the European Commission, announced that NATO is planning to establish a second base for training missions in Erbil. Thus, the U.S. has shared the responsibility to respond to attacks from Iran-linked Shiite militias with its allies in NATO.

Read: Political Shiism and State-Building in Iraq: An Interview with Ali Taher El-Hammood

On July 26, 2021, during the latest strategic dialogue, U.S. President Joe Biden and al-Kadhimi announced that the U.S. combat mission in Iraq will end by the end of 2022, and that the U.S. military’s role will transform into an advisory mission against DAESH. Coalition spokesman Col. Myles Caggins stressed that the coalition’s consultation to the Iraqi army is only conducted in Baghdad.

Furthermore, the latest strategic dialogue reaffirmed that the U.S. troops in Iraq have been invited by the Iraqi government, which aims to deter attacks on bases hosting the U.S.-led coalition troops. Finally, the Biden administration pledged $5.2 million in support of a UN mission to observe Iraq’s early elections in October 2021.

No United States official referred to a full withdrawal from Iraq. The number of U.S. personnel training and advising missions in Iraq as of early 2022 is not clear. Under these circumstances, the U.S. withdrawal of combat missions from Iraq will not stop drone and rocket attacks by the Shiite militias on U.S. diplomatic facilities and bases hosting the U.S.-led coalition troops in Iraq.

This is to say that the Iraq-U.S. strategic dialogue divided anti-U.S. groups in Iraq. Muqtada al-Sadr, the leader of the plurality of seats in the Iraqi parliament, and even the Fatah Alliance, the political wing of the Popular Mobilization Forces in the parliament, welcomed the results of the strategic dialogue.

However, the Iraqi Resistance Coordination Committee, formed last year to coordinate anti-U.S. militias in Iraq, which includes Kata’ib Hezbollah, Asa’ib Ahl al-Haq, Harakat Hezbollah al-Nujaba, and Kata’ib Sayyid al-Shuhada, rejected the results of the strategic dialogue. The committee evaluated them as a “deceptive declaration to maintain the occupation.” The committee also threatened to continue their attacks until “the existence of any foreign soldier” is terminated.

So far, the U.S. has responded with limited retaliatory strikes against attacks carried out by militias, which has damaged the efforts of the al-Kadhimi government to stabilize Iraq. The Biden administration has strived not to escalate further attacks against American forces. That is why public support for the U.S. military presence in Iraq, including the Democratic Party, has been conditioned on whether the militia attacks cause serious damage to U.S. troops. The Biden administration is interested in keeping leverage in Iraq by avoiding a scenario where the country succumbs to Iranian influence.

A full U.S. withdrawal from Iraq is not expected given that the Biden administration alluded that the 2011 withdrawal was a “mistake.”

Against this backdrop, the Biden administration viewed al-Kadhimi as an effective partner and he was the first Arab leader to meet with Biden after the president assumed office. A full U.S. withdrawal from Iraq is not expected given that the Biden administration alluded that the 2011 withdrawal was a “mistake.” In addition, the U.S. has supported the Kurds in the north and other ethnic and religious groups, particularly Christians and Yazidis, who were portrayed by media outlets in the West as vulnerable to attacks from DAESH.

All in all, Iraq is viewed by the U.S. as an instrument for checkmating Iran and securing the entire Gulf region. Consequently, the U.S. presence in Iraq is bound to the political cost of retaliatory strikes for the Biden administration in the U.S., and the nuclear talks between the U.S. and Iran.

VIDEO: 60 years of US intervention in Iraq explained in 10 minutes

Fatih Oguzhan Ipek is a researcher at Anadolu Center for Near East Studies and a PhD candidate at the Middle East Institute, Sakarya University. He follows political and security trends with a special focus on Turkey and the Gulf countries’ foreign and defense policies towards Iraq.