Across Afghanistan, Iraq, and Syria, the U.S. Department of Defense has confirmed that, as at the fourth fiscal quarter of 2020, it had engaged the services of 27,388 contractors in these three theatres. 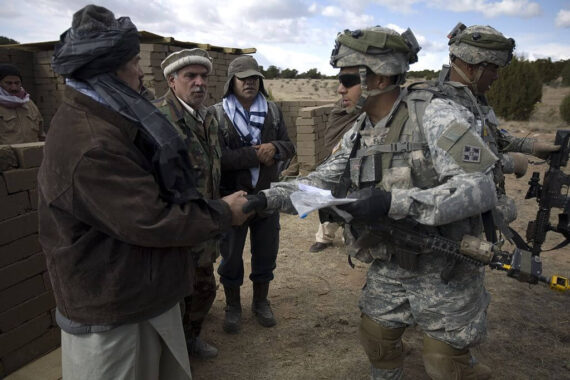 Mercenaries have been a part of war since humans first started to coordinate and live amongst each other in societies. In the classical era, Xenophon of Athens recounted how his mercenary force, “The Ten Thousand”, helped Achaemenid prince Cyrus the Younger in his failed attempt to usurp the Persian throne from his brother Artaxerxes II. This extended through to the famous mercenary armies of the Renaissance period, famously criticized by writer and philosopher Niccolo Machiavelli for being a threat to their employers.

However, and despite numerous national laws forbidding mercenary activity in the militarily advanced Western world, mercenaries have continued to flourish and thrive in the battlefields and cities of Iraq and Afghanistan – the two countries who suffered the most from the American imperial footprint in the 21st century.

With the United States now openly stating that it intends to disengage from both countries, it is likely that, rather than reduce the number of mercenaries deployed, it will instead increasingly rely on its army of private military contractors to secure its interests.

The case of Iraq

As one of the world’s most fossil fuel-rich nations, Iraq has been blessed (and cursed) with bountiful natural resources. This has obviously attracted the avarice and attention of massive international energy companies who wish to exploit Iraq’s oil stocks and also its burgeoning natural gas fields.

ExxonMobil, one of the world’s largest oil and gas companies headquartered in Texas, operates two subsidiaries in Iraq, one of which deals with the Northern Iraq Region and one of which specializes in contracts relating to the richer oil fields in the Iraqi south. ExxonMobil is currently the lead contractor at the West Qurnah oilfield in cooperation with China’s PetroChina.

ExxonMobil’s operations have been targeted several times by pro-Iran Shia jihadist groups who were seeking to make the U.S. presence in Iraq as inhospitable as possible in order to give Tehran the diplomatic leverage it needed against Washington elsewhere. The American oil giant had to evacuate its employees on several occasions, including after rocket attacks struck their compound near Basra in 2019.

These compounds are guarded not by U.S. combat troops, but by mercenaries – or, as they like to be known, private military contractors. The use of the word “contractors” is intentional as it is vague enough to cover numerous operations, whether that be training, logistics, or even the use of deadly force.

These compounds are guarded not by U.S. combat troops, but by mercenaries – or, as they like to be known, private military contractors.

Perhaps the starkest example of the use of deadly force is when the American mercenary company Blackwater, which has since rebranded itself as Academi, used deadly force on unarmed civilians during the Nisour Square massacre in Baghdad in 2007, killing 14 and wounding others. While three mercenaries were sentenced to 30 years in jail for manslaughter and one was sentenced to life for first-degree murder, former President Donald Trump pardoned all four killers in one of the ugliest and most egregious acts of American exceptionalism committed during his time in office.

This will have the effect of emboldening mercenary companies as they know they can acquire billions in contracts while operating in a murky world devoid of accountability in a corporate war environment where violence equals profit.

The Iraqi experience is largely replicated in the Afghan theatre, with mercenary companies running logistics to various American and NATO bases.

The case of Afghanistan

The Iraqi experience is largely replicated in the Afghan theatre, with mercenary companies running logistics to various American and NATO bases, providing highway security for supply routes, guarding embassies and government installations, and even providing training to the Afghan police.

However, a series of scandals involving contractors using deadly force and engaging in corruption and black market smuggling operations caused enough of an uproar to force then-President Hamid Karzai to ban several mercenary companies, including Blackwater.

However, and commensurate with Karzai’s status as a president of an occupied country, international pressure forced the Afghan government to backtrack and they decided to allow mercenaries to simply rebrand themselves not as private security but as “risk management” companies. This was after NATO countries doubted the Afghan Public Protection Force’s capabilities of providing security in the country they were apparently sovereign over.

With the Taliban currently ascendant and the U.S.-installed Afghan government facing an existential threat, it is highly doubtful that the United States will entirely cut their losses and withdraw from Afghanistan. China has recently made a number of overtures by formally hosting Taliban officials and this will raise concerns in Washington as they already face off against Beijing in other strategic theaters around the globe.

It is therefore likely that the U.S. will want to secure the Afghan government by allowing international mercenary companies to continue to operate as “advisers” who will provide training. This may have the effect of allowing the Afghan government to maintain control over Kabul and other major population centers, effectively controlling islets surrounded by a sea of Taliban control in rural Afghanistan. Naturally, Kabul will pay through the nose for the pleasure of hosting mercenaries to ensure their survival.

Across Afghanistan, Iraq, and Syria, the U.S. Department of Defense has confirmed that, as at the fourth fiscal quarter of 2020, it had engaged the services of 27,388 contractors in these three theaters. Considering there are around 2,500 troops in Afghanistan, 2,500 in Iraq, and around 900 or so in Syria, one begins to appreciate the sheer scale of the “contractor” economy and how reliant the U.S. and its allies are on it.

While the approximately 30,000 contractors will obviously not all be combat oriented (about 10-20 percent are in combat roles while the rest offer support functions), a significant proportion of them will be armed and will be protected under U.S. federal laws that allows them to use “deadly force against enemy armed forces only in self-defense”.

This means that, with the U.S. drawing down uniformed personnel, this already extant addiction to hiring soldiers of fortune is not going to reduce, but in fact the U.S. will become ever more dependent on them to remain relevant in theaters of war they have been forced to abandon.