The Unknown Side of Boko Haram: How a Salafi Group Spread in Historically Sufi Northern Nigeria

Salafism has had a remarkable impact on the transformation of Islamic life in post-colonial Nigeria and it needs to be further explored. Whether sooner or later, Boko Haram will one day disappear, but Salafi thought is a longer-term phenomenon that has been shaping and transforming Islamic life in Nigeria. 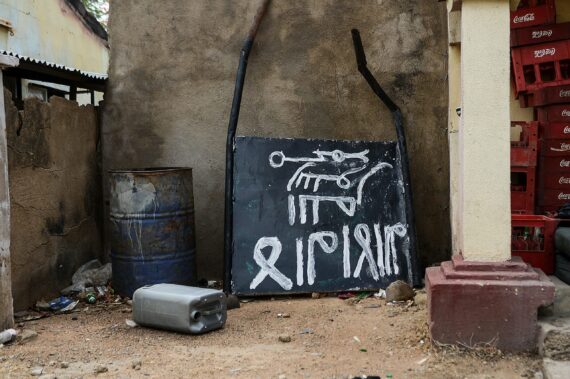 A writing written by Boko Haram is seen after the Nigerian army seized some areas in the city of Yola in Adamawa province, Nigeria. Anadolu Agency

Boko Haram has been perpetrating mass crimes in Nigeria since 2009. The insurgency has massacred thousands of people and has destroyed the entire region’s political structure and economic circulation. According to the United Nations Office for the Coordination of Humanitarian Affairs (OCHA), the group has killed over 20,000 people and has forced nearly 2.1 million people to flee their homes. Massive displacement has caused serious consequences for the country such as large-scale famine, which threatens the lives of 7 million people. Just this year, 4.7 million people were left in urgent need of food assistance.

As the group gradually gained infamy in the region as well as the world, discussions have set to investigate the main reasons behind the emergence of Boko Haram. The decade-long deep-rooted political and economic issues have always been pointed out as the main reasons for the birth of Boko Haram. It is true that widespread poverty leaves millions of people impoverished; economic inequality and weak political structures trigger ethno-religious conflicts and violence between the Christian dominated South and the Muslim dominated North; epidemic corruption wipes out the country’s development; and the poor education system fails to transform northern Nigeria through the education of new generations.

Undoubtedly, these chronic problems have had a dramatic influence on many young Nigerians who are pushed to a stalemate where their hope for the future is about to end. However, religious aspects of Boko Haram have usually been ignored in the discussions. In fact, the transformation of Islamic life itself can be regarded as the root cause that gradually gave birth to Boko Haram. By challenging Sufi Islam, which has firmly been established in Nigeria since the fifteenth century, the group built a theological foundation based on Salafi thought, which became a new phenomenon in the 1970’s.

Historically, Sufism was the main Islamic school in the region over the centuries. Although the spread of Islam gradually began to be driven by Sufi orders in the 15th century, the 19th century was marked as a milestone for Sufi Islam. Preaching Sufi Islam and becoming a prominent scholar, Usman Dan Fodio declared a war in 1804 against the rulers due to their oppressive, corrupt and un-Islamic administration. After 5 years of regional war, Fodio with his followers, succeeded to conquer most of the city-states across northern Nigeria, southern Niger and the western part of Cameroon. With this, he formed the biggest Islamic empire in the history of West Africa since the Songhay Empire collapsed in the 15th century. However, the significance of the Sokoto Empire was not its military advancement or political power, but a broad socio-political system that still mostly exists in present northern Nigeria. As a result, Sufi Islam gradually became a predominant form of Islam and a guideline for Nigerians in their lives, as it was institutionalized in both government and civil society.

The picture began to slowly change after Nigeria gained its independence from the United Kingdom, as Sufism faced a new phenomenon, Salafism. Since the 1970s Salafism began to gain its popularity among different sects of Nigerian Muslims. Essentially, social and economic developments, such as high population growth and rapid urbanization, helped Salafi thoughts to be planted in society. From 1960 to 2015, the country’s population quadrupled from 45 million to 182 million people. According to figures published by the World Bank, the number of people in urban areas also skyrocketed from just 6 to 87 million in the same period. The population boom in urban areas brought with it a huge number of young people who didn’t have traditional Sufi education.

These socioeconomic developments undermined the traditional Sufi establishment and formed a basis for new religious movements and scholars to emerge. Since the 1970s, Salafi scholar Abdulkadir Gumi publicly questioned and criticized Sufism and Izala, one of the largest Salafi organizations in the region, reached to huge audiences from different levels of society.

Middle-class urban Muslims approved Izala’s messages as it provided “a more rational religion.” The anti-Sufi rhetoric that Izala built also meant freedom from the traditional hierarchies for the impoverished youth who moved to the urban cities seeking a better life. Therefore, Salafi thought played a crucial role in the transformation of understanding and practicing Islam in northern Nigeria. Nonetheless, the 90s brought structural changes for Izala. The movement was divided into many sections as intra-Salafi tension increased and it caused radical groups, such as Boko Haram, to flourish.

Two essential details reveal how Boko Haram exploited Salafi thought and used it in order to frame its violence. First, the founder of the group, Muhammed Yusuf, rose as a young Salafi preacher in an Islamic center that was founded by a former Salafi Izala preacher, Jafar Mahmud Adam. Through this network, Yusuf managed to control several mosques and found a significant number of audiences to address his radical sermons. Therefore the system Yusuf created within the Salafi network helped him form Boko Haram.

Secondly, starting from the 1980s, the city of Maiduguri, which is the capital city of northeastern Borno state, became a center for Salafi groups just in less than two decades. The city was where Adam – the Salafi scholar who hired Muhammed Yusuf into his network – was based, and where Boko Haram was born. It may seem that Boko Haram, under the leadership of Abubakar Shekau, has moved away from the Salafi concept to a new ideology that favors Daesh-style violence-centered terrorism. However, despite the theological evaluation, Salafi doctrine still remains within the group’s ideological structure.

In order to avoid any possible confusion or assumption, I would like to emphasize that this piece is not written to make a comparison between “peaceful” Sufism and “violent” Salafism, the problematic angle which Western scholars and writers like to use. These two Islamic schools have various sub-branches and numerous interpretations across the Islamic world. However, Salafism has had a remarkable impact on the transformation of Islamic life in post-colonial Nigeria and it needs to be further explored. Whether sooner or later, Boko Haram will one day disappear, but Salafi thought is a longer-term phenomenon that has been shaping and transforming Islamic life in Nigeria. Therefore, this very fact reflects a deeper change for Nigeria, more than does the violence committed by Boko Haram.

Mucahid Durmaz is pursuing his M.A. in African Studies with a focus on religion in West Africa at SOAS, University of London. Durmaz also works at the TRT World Research Centre.

Also Read
The New Foreign Policy: The World Is Heading towards New Models